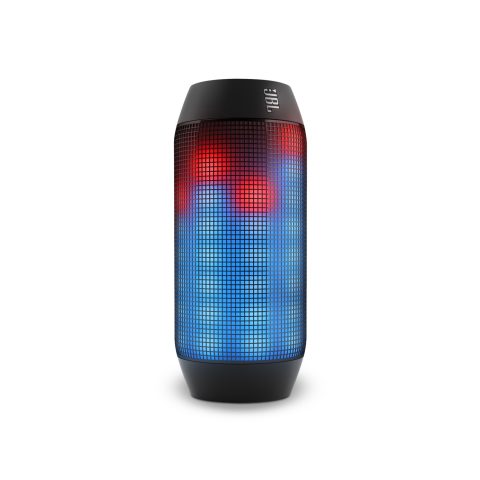 Most modern portable speakers are meant to be heard but not seen. This is not the case for the JBL Pulse: This compact Bluetooth device has a color-changing LED-light display to match its vibrant high-volume sound.

It’s a good speaker to bring a little color to your small party, or to brighten up easy listening at home. If you’re thinking about buying a JBL Pulse speaker, read on. We’ll weigh the pros and cons to help you decide if this is the right device for you.

The JBL Pulse’s most notable feature is its LED lights, which distinguish the device from other Bluetooth speakers on the market. The lights wrap around the speaker and can be turned on or off when playing music. Users can program the display to wave along to different themes, via JBL’s Pulse app.

Similar to the JBL Flip series, the Pulse is tube-shaped. It has a little more girth than the Flips to accommodate the dual-driver system, but at 2 pounds, the speaker still is portable and easy to carry.

Given the 10-hour battery life and the Bluetooth and NFC connectivity, the Pulse is a great option for folks wanting to bring their party on the go. Before you decide to purchase one, however, check out our review as we go into detail on where the JBL Pulse spikes and flatlines.

We analyzed expert opinions from review sites such as The Sweethome and Good Housekeeping. We also evaluated user reviews to see what shoppers had to say about the various attributes of the speaker.

The device is ranked from a low of 1 to a high of 10. We took into consideration what users said about the speaker’s overall performance, sound quality and ease of use. We also factored in any other user observations, such as durability and features.

The Pulse essentially has two jobs: play music and display pretty lights. According to the user reviews, the speaker does a pretty good job at both. Reviewers praised the Pulse’s range and clarity, which made it good enough for small gatherings. The LED display added a playful element to the listening experience; users (and their friends) were mesmerized by how the patterns would move with the music.

On the more functional side, connecting a device was fairly easy. Once users activate Bluetooth on their phone, they can simply push the Bluetooth symbol on the side of the speaker to sync.

As pretty as the Pulse is on the outside, it’s really the inside that counts. The speaker has enough oomph to power a small party, but some reviewers experienced distortion when pushing it to higher volumes. At those levels, the bass component couldn’t handle the more thunderous genres such as rock or hip-hop.

The JBL Pulse is a great speaker to have when you’re hanging out with friends, whether indoors or outdoors. The LED light display adds a nice complement to the music and can make the party more fun with programmed and customizable themes.

Battery life could potentially be an issue depending on where you’re playing the music. If you will be away from a power source for a while, turning the LED display off can extend your battery and keep the party going.