Some millennials are slow to fully leave the nest, but there’s at least one instance in which that can work in their parents’ favor: the family cell phone plan.

Nearly half of smartphone or mobile phone owners with children 18 or older (49%) have kept their adult kids on the family cell phone plan. And 53% of those parents say that the child pays some or all of their bill, according to an online survey commissioned by NerdWallet and conducted by Harris Poll.

Family plans save everyone money

Heather Morgan doesn’t think her daughter, Vicki, 30, will ever leave the family cell phone plan — but she’s OK with that.

Splitting the cost of a cell phone plan among family members can save everyone money — a lot of money.

Just look at the monthly cost difference between a family plan and a solo plan from each of the four major wireless providers.

Each carrier’s data packages differ, so we analyzed plans that provide around 2 gigabytes per person, per month. The costs include charges for the data package, line fees and device installment plan (assuming an iPhone 6S 16GB on each line, financed over 24 months). Taxes, fees and add-ons, such as insurance, aren’t reflected in these costs.

Cost of a family plan

Depending on the plan and the carrier, a family of four can save $15 to $25 per person, per month, on a shared plan versus an individual plan. That adds up to between $180 and $300 per year for each family member.

Keeping that money in their bank accounts can help some young adults get on their feet after college. That was the case with Brandon Schroth, 27, a digital analyst in San Diego who recently got his own cell phone plan after more than a decade on his parents’. His 31-year-old brother was also on their plan.

“I was allowed to stay because I wasn’t making a lot of money at my entry-level job after I graduated from college,” Schroth says. “My parents felt better about asking me to get my own plan once I started making a decent amount of money and could support myself comfortably.”

This isn’t a case of millennials mooching off their parents. More than half of parents who have or had an adult child on their plan (53%) said their child helps pay the bill.

Morgan, her husband and her daughter divide the family’s roughly $200 monthly bill in thirds. Her daughter pays her share each month.

“She’s independent; she doesn’t live with us or anything,” Morgan says of her daughter, who works in sales.

Schroth says that part of the reason his parents let him stay on their plan was that he paid his portion of the bill each month and never went over their plan allowance. 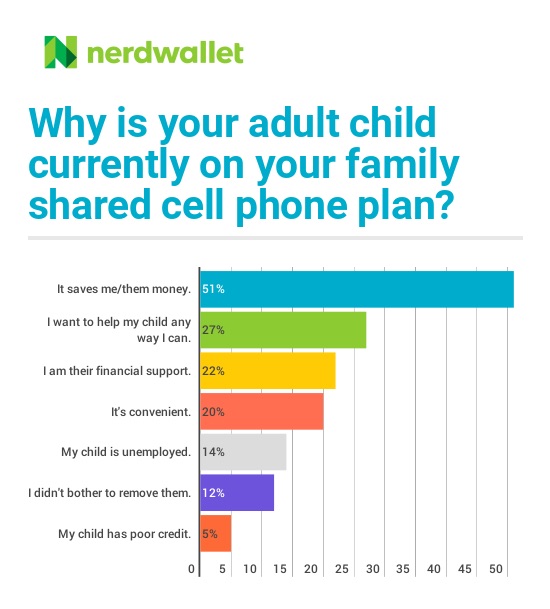 When parents and their progeny do go separate cellular ways, it’s typically initiated by the child. Among parents who previously had a child age 18 or older on their family plan, 65% said the child chose to leave the plan. Reasons for leaving included wanting to pay for their own plan (24%), changing to a different mobile service provider (19%) and starting a plan with someone else, such as a significant other (17%).

Sometimes parents have to nudge their kids off the family plan, though. That’s what happened to Schroth and his brother, after his brother racked up hundreds of dollars in data overages.

“My parents used him as a scapegoat as to why we should be on our own individual plans,” Schroth says. “I secretly think they were trying to find a reason for a long time but just didn’t want to approach the subject.”

Of the parents who previously had an adult child on their family plan, 17% said they removed their child from the plan to lower their cell phone bill, and 15% said it was because they wanted their adult child to be financially independent.

Note: Parents surveyed were asked to think of their youngest child when responding, if they had more than one child on their plan. So the average reported age is likely on the low side.

Tips for saving on your cell phone bill

Parents and their adult kids can save hundreds of dollars each year by joining forces on a family plan — but there are ways to save even more.

Check your usage: Figure out how much data you’ve used during the past three months by checking your bill or your carrier’s app. Once you know how much data you really need, you might be able to save money by switching to a plan with lower monthly data limits.

Find data-saving features: If you use the bulk of your data for streaming music or video, consider a carrier like T-Mobile, which offers plans with unlimited streaming from sites such as Netflix, Hulu, Spotify and Google Music.

Adjust your settings: You can also lower your overall usage by making tweaks to your behavior and your apps’ behavior.  For example:

Go prepaid: Boost Mobile, Cricket Wireless and MetroPCS all offer family plans for a fraction of the cost of traditional plans.

For example, Boost Mobile offers four lines with 2GB per line, per month, plus unlimited talk and text, for $100. That’s just $25 per line. Cricket offers 2.5GB per line for the same price.

Just keep in mind that prepaid carriers often require you to pay full price for your phone, rather than spreading the cost out over two years. Some carriers let you bring your own phone, if it’s compatible. You can also save money by buying a used cell phone.

This survey was conducted online within the United States by Harris Poll on behalf of NerdWallet May 19-23, 2016, among 3,010 U.S. adults 18 and older, among whom 1,619 are parents of children ages 18+ and own a smartphone/mobile phone, and of those 730 have or previously had an adult child on their family shared cell phone plan. This online survey was not based on a probability sample, and therefore no estimate of theoretical sampling error can be calculated. For complete survey methodology, including weighting variables, please contact Maitri Jani.

Keep an eye on your cash. NerdWallet breaks down your spending and finds you new ways to save each month.