The S&P 500 is a stock market index that measures the performance of about 500 companies in the U.S. It includes companies across 11 sectors to offer a picture of the health of the U.S. stock market and the broader economy.

What companies are included in the S&P 500?

Thanks to this criteria, only the country’s largest, most stable corporations can be included in the S&P 500. The list is reviewed and updated quarterly.

The S&P 500 tracks the market capitalization of the roughly 500 companies included in the index, measuring the value of the stock of those companies.

The S&P 500’s value is calculated based on the market cap of each company, adjusted to consider only the number of shares that are traded publicly. If we add up the market caps of all the companies in the index, we could say the S&P 500 is worth about $24.47 trillion as of February 2020.

Why assign the weightings? To give as accurate a picture of the stock market’s health as possible.

That’s important because when Microsoft’s stock rallies (or falls) 10%, that could mean a gain or loss of hundreds of billions of dollars. Compare this to clothing retailer The Gap, currently located near the bottom of the list. If its stock rallies or loses 10%, it could mean a gain or loss of a couple hundred million dollars. In this scenario, Microsoft’s price movements illustrate a much larger disruption to the economy than those of The Gap.

To arrive at the number we’re accustomed to seeing on the S&P 500 ticker, the index’s total market cap is divided by a proprietary divisor. As the share prices of S&P 500 companies move throughout the day, each movement has an impact on the value of the index, though companies near the top of the list have a substantially larger impact than those near the bottom. 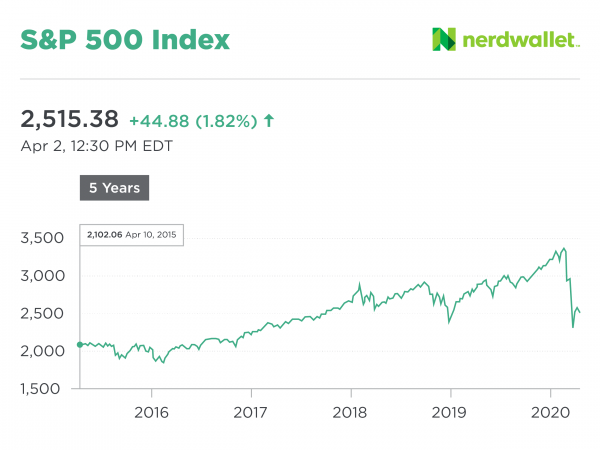 Tip: The easiest way to see what the S&P 500 is today is to type its stock ticker, “SPX,” into Google.

The S&P 500 isn’t a company itself, but rather a list of companies — otherwise known as an index. So while you can’t buy S&P 500 stock, you can buy shares in an index that tracks the S&P 500.

In fact, this is one of the best ways for beginner investors to get their feet wet in the stock market. Here are some of the most popular index funds that track the S&P 500:

To get started, you’ll need to set up an online brokerage account. If you don’t already have one, see NerdWallet’s list of the best online brokerages for mutual funds to find an account that’s a good fit.

For nearly the last century, the average annual total return of the S&P 500 (which includes dividends) has been about 10%, not adjusting for inflation. However, keep in mind this doesn’t mean you can expect to get a 10% return on your investment in an S&P 500 index fund every year.

In 2008, for example, the S&P 500 finished the year down a staggering 37%. The following year, it finished up 26%. Earning a 10% average annual total return requires a long-term investing mindset and a willingness to ride out market volatility. Learn more about average stock market returns here.

What’s the difference between the Dow Jones Industrial Average and the S&P 500?

The DJIA, or simply the Dow, is another stock market index that includes large, established companies. However, there are a few key differences.

Both the S&P 500 and the Dow include companies that are regarded as the country’s healthiest corporations. If you’re interested in purchasing stock from any of these companies (as opposed to shares of index funds), explore our guide on how to buy stocks to get started. 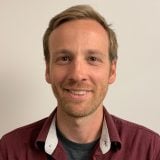 Chris is a NerdWallet investing writer. He has more than 10 years of agency, freelance, and in-house experience writing for financial institutions and coaching financial writers. Read more