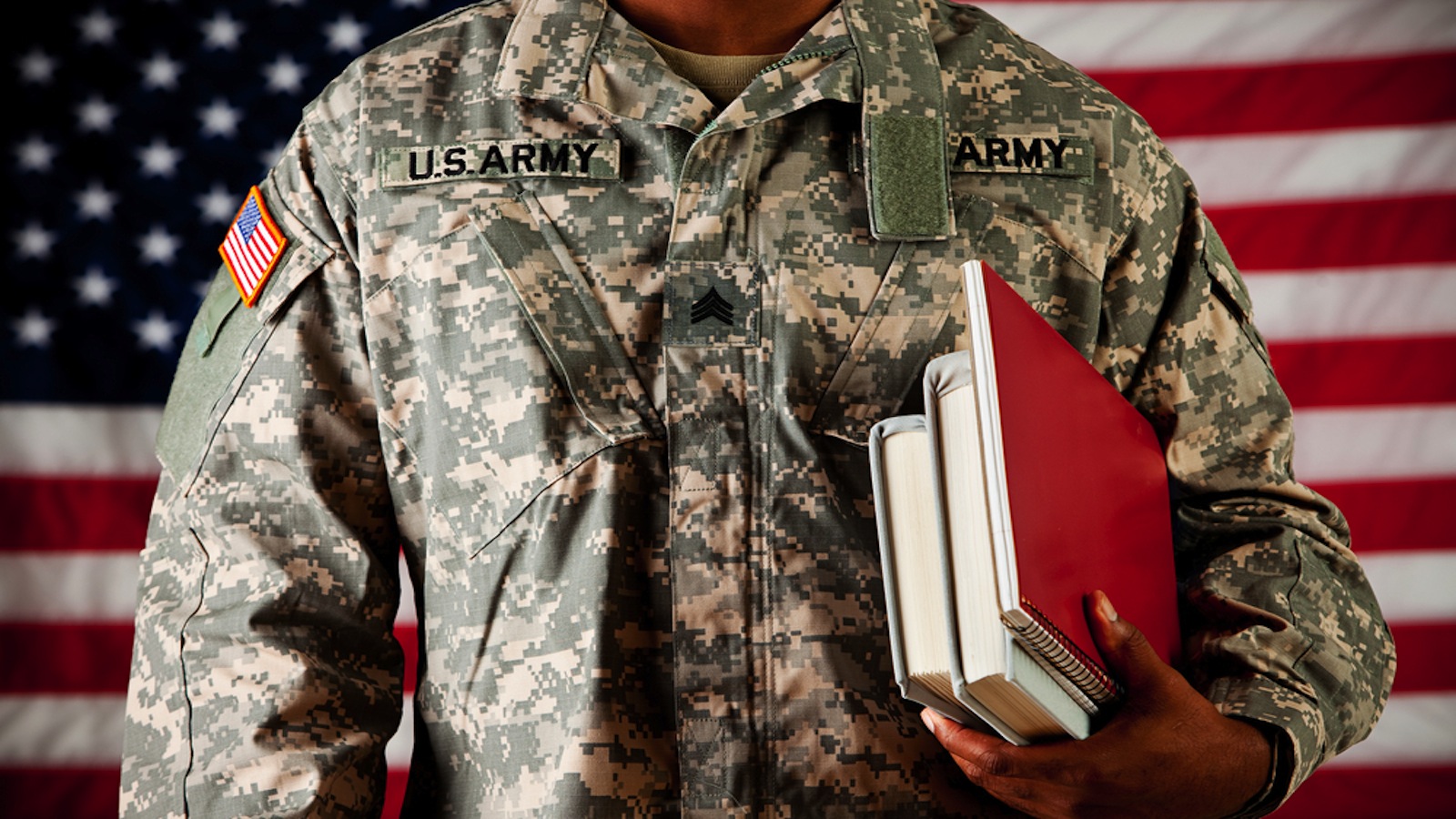 Go to college or enlist in the military? It may seem like an either-or option, but the Army Reserve Officer Training Corps (ROTC) program, hosted at 273 colleges across the country, offers students the opportunity to do both. ROTC combines military science courses with extracurricular activities to put students on track for an Army officer position. Those who complete the duration of their two to four-year ROTC program, or who have accepted a scholarship, must serve in the Army upon gradation. But that doesn’t mean that the program is training solely for military service—ROTC prides itself on producing excellent leaders for any career.

Certain things set ROTC students apart—mandatory physical fitness, military science classes, and an Army uniform during ROTC training—but, in many ways, ROTC students enjoy a traditional college experience. They can choose to major in any academic subject, can join student clubs or pledge to fraternities and sororities, and, despite the rumor, they do not have to shave their heads. ROTC students are also eligible for national Army scholarships that cover full-tuition with monthly stipends, in addition to scholarships offered through their college.

NerdScholar has put together a list of our favorite ROTC units. Not only do these colleges serve as host schools (instead of affiliate schools), but we think that they foster an environment that supports and encourages ROTC students.

The ROTC unit at Chattanooga, known as Mocs Battalion, operates differently than most programs. Instead of relying on the officers in charge, “the cadets plan, resource, and execute the required training,” says Maj. Robert Ricks. “It is widely agreed that our model of experimental learning better prepares young men and women for the leadership challenges they will face in the Army.” The Mocs Battalion has also developed a cultural partnership with the Eastern Band of Cherokee Indians (EBCI) that allows cadets to mentor Cherokee high school students and conduct “leadership camps” with Cherokee Junior ROTC cadets. The affiliation between these two groups has spawned a three-week internship available to all Chattanooga students, in which Mocs Battalion cadets assist in familiarizing the non-ROTC interns with the Cherokee community. Says Ricks, “I find it ironic that so much emphasis is put on understanding cultures outside of our borders when there is so much to learn about ‘foreign’ cultures that live within our boundaries.”

The history of Santa Clara’s ROTC unit, Bronco Battalion, dates back to the Civil War. Since then Bronco Battalion has produced leaders in every major conflict, proving itself as a dedicated program. “Compared to other programs, we train much more often over weekends,” says cadet Grace Tommy. “On average, we usually have three to four weekend training events each quarter.” And the extra training has certainly paid off. In 2011, Santa Clara won the MacArthur Award for the top Army ROTC program on the West Coast and, in 2012, two Bronco Battalion instructors received the Cadet Command Award for Excellence. “In the current senior class, one-third are Distinguished Military Graduates (DMG), meaning that they are within the top 20% of all cadets in the nation,” Tommy adds. The quality of cadre members, or program leaders, at Santa Clara has influenced the cadets to exhibit strong leadership. “Being in an ROTC program has really helped me develop into a confident and competent leader,” says Tommy.

The Citadel, The Military College of South Carolina – Most Immersive

Scholarships: The Citadel awards more than $3 million dollars annually to entering freshmen and enrolled upperclassmen, including 25 full academic scholarships. Freshmen are automatically considered for scholarships, while upper-class cadets must complete a separate application.

The Golden Eagle Battalion at Tennessee Tech University ensures that each cadet receives the necessary skills to graduate as a successful leader, whether for the military or their future company. “Our staff and faculty are strongly committed to help each cadet receive individualized career counseling, mentoring, and coaching,” says Lt. Col. Dominic Ciaramitaro. “[ROTC] students will get the chance to mold their leadership skills, challenge themselves physically and mentally, and build strong relationships with fellow cadets, students, and the ROTC cadre.” Tennessee Tech’s ROTC program was founded in 1950, and since has commissioned 1,700 officers. The cadets receive training at military facilities throughout Tennessee and Kentucky and have the opportunity to attend a variety of courses at specialized schools, such as Airborne or Air Assault. Additionally, cadets can travel abroad to partnering military schools in Europe, Africa, Asia, and Latin America.

Scholarships: Tennessee Tech offers scholarships to ROTC students based upon scholastic, athletic, and leadership attributes, including a scholarship for science, technology, engineering, or mathematics majors, a general academic scholarship, and a dorm scholarship. The university prides itself on typically graduating more than half of all students debt-free.

When asked what he thought distinguished Michigan State’s Spartan Battalion, Lt. Bill Parker said, quite simply, “Our cadets.” Parker, chair of the school’s military science department, explained that the cadets run the battalion, which makes every class and training event “an opportunity to further develop those leadership skills sought by many organizations.” The military science department offers both basic and advanced courses, reserving basic courses for freshmen, sophomores, and any interested Michigan State student. The Spartan Battalion draws on more than 100 years of tradition and offers ROTC students a multitude of training programs and cultural opportunities. Says Parker, “The Spartan Battalion is one of the best programs in the nation, exceeding the national average in cadets receiving their top career choice, training opportunities, and performance in regional and national competitions.”

Scholarships: Michigan State offers up to five room-and-board scholarships each year and awards additional endowments based upon performance.

The name of William & Mary’s ROTC unit—“The Revolutionary Guard Battalion”—is a testament to the college’s rich history of training military and civilian leaders. The battalion in Williamsburg, Va. has upheld this history in part by excelling at the national Leadership Development Accessions Course (LDAC), which ROTC students complete the summer before their senior year. “Cadet students consistently provide feedback that they are well prepared to attend this training, and consistently we score much higher than the national average,” says Lt. Col. James Kimbrough, chair of the military science department. This preparation begins on day one, when the college outfits ROTC students will all of their required equipment, such as field gear, uniforms, and physical training uniforms. The cadets also receive mentors to “assist with navigating the rigors of our training program and academic life at college,” Kimbrough says. “Our cadre-to-student ratio provides the type of one-on-one learning and evaluation that students are looking for.”

The University of North Georgia – Most Army ROTC Focused

Since its founding in 1873, the University of North Georgia has produced exceptional leaders and officers—so much so that it has been designated The Military College of Georgia. It is one of just six senior military colleges in the nation and, of those six, the only one with an Army-only ROTC program. “UNG is a leadership laboratory that prepares cadets to be an officer when they enter the military by immersing them in military education some 40 to 50 hours per week,” says Col. Todd Wilson, an active-duty military science professor at the university. ROTC students earn a degree that “builds upon military training, further honing intelligence, leadership, and critical thinking,” Wilson adds. In addition, North Georgia’s Eagle Battalion has the opportunity to gain international experience by training with partnership programs around the world.

Scholarships: North Georgia offers a number of scholarships for cadets, including the Georgia Military scholarships.

A small, private school in Illinois, Wheaton College has a long history of military support. Wheaton canceled graduation during the Civil War, hosted soldiers on campus during World War I, and produced some 1,600 soldiers in World War II. This legacy reverberates through its present-day ROTC program. “There is a culture of excellence that resides among the cadets,” says Lt. Col. Jim Hoyman, a military science professor at the college. “With a long tradition of high marks, awards, and trophies, cadets are proud to add daily to a treasured legacy of excellence.” Additionally, Wheaton College has a Christian affiliation that carries over into the Rolling Thunder Battalion. “[Wheaton] is serious about spiritual development,” Hoyman says. “Integration of faith and learning adds a vital component to the development of leaders expected to make critical moral and ethical decisions on the battlefield.”

Scholarships: Wheaton recognizes all national Army scholarships, which can cover 100% of a student’s tuition and fees, as well as a stipend for living expenses and books.