Many Black Friday Deals Are A Bust

Many Black Friday
Deals Are A Bust

NerdWallet research found 3 out of 4 U.S. adults plan to hit Black Friday sales this year. Consumers are ready to spend more, too, and pay off holiday debt faster. But the deals they're chasing often are just warmed up leftovers from last year.

NerdWallet research found 3 out of 4 U.S. adults plan to hit Black Friday sales this year. Consumers are ready to spend more, too, and pay off holiday debt faster. But the deals they're chasing often are just warmed up leftovers from last year.

A NerdWallet analysis of 21 Black Friday advertisements found that 95% of retailers plan to repeat some identical deals from last year.

Still, according to an online survey of more than 2,000 U.S. adults commissioned by NerdWallet and conducted by Harris Poll, 76% of Americans say they plan to shop on Thanksgiving or Black Friday and will spend an average of 4.5 hours doing so. Consumers also are ready to spend more — and pay off their debt faster — this holiday season.

In this report, NerdWallet analyzes the reality of Black Friday deals as well as how American shoppers are managing their money this holiday season. 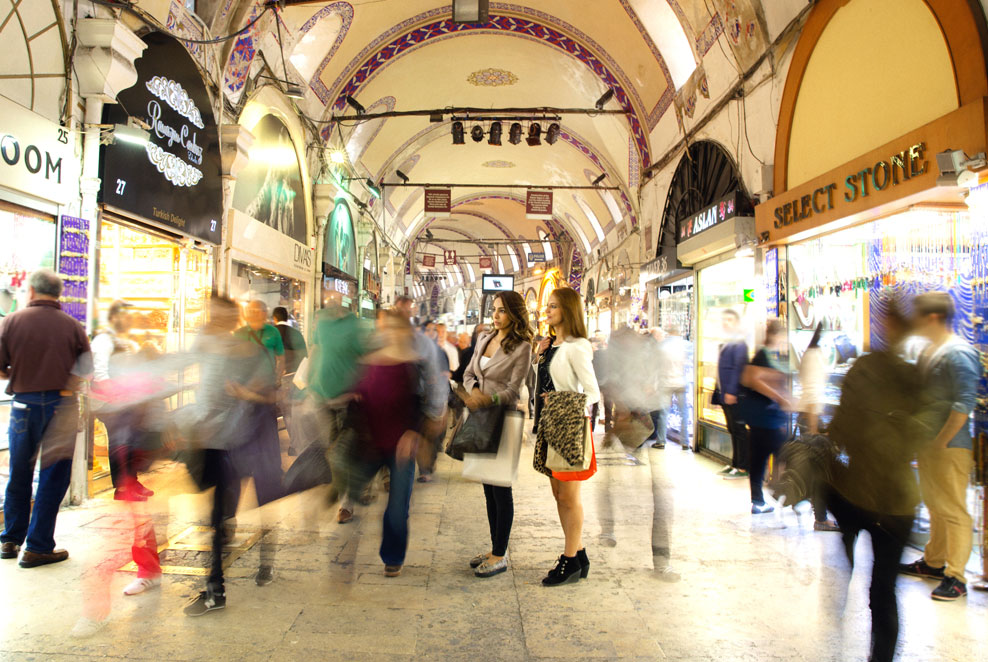 Just because a retailer promotes a certain product as a ‘deal,’ consumers shouldn’t take that at face value.

Part of the appeal of Black Friday deals is their limited-time nature. Doorbusters and other big markdowns are typically offered for only a few hours or while supplies last — a retailer technique that makes sale items all the more coveted.

However, those deals might not be as rare and fleeting as they seem. NerdWallet discovered that a large number of big-name retailers are repeating 2014 prices in 2015.

“This is the fourth year we’ve conducted this analysis, and we’re still seeing repetitive deals every year,” says NerdWallet shopping manager Katrina Chan. “Just because a retailer promotes a certain product as a ‘deal,’ consumers shouldn’t take that at face value. Shoppers still have to do their homework early.”

Some retailers are repeat offenders

At some stores, it’s not just the ghost of one deal from Black Friday past that visits again. We discovered some stores that are filling their 2015 ads with multiple repeat deals.

For instance, at Southern-inspired department store Belk, we located at least 80 deals in the 2015 Black Friday ad that are identical to its 2014 ad. Major department store Macy’s isn’t far behind, with more than 60 repeated deals.

Macy’s even seemed to repeat its Black Friday ad layout this year. Take a look at the striking similarities in this side-by-side comparison of pages from 2014 and 2015. 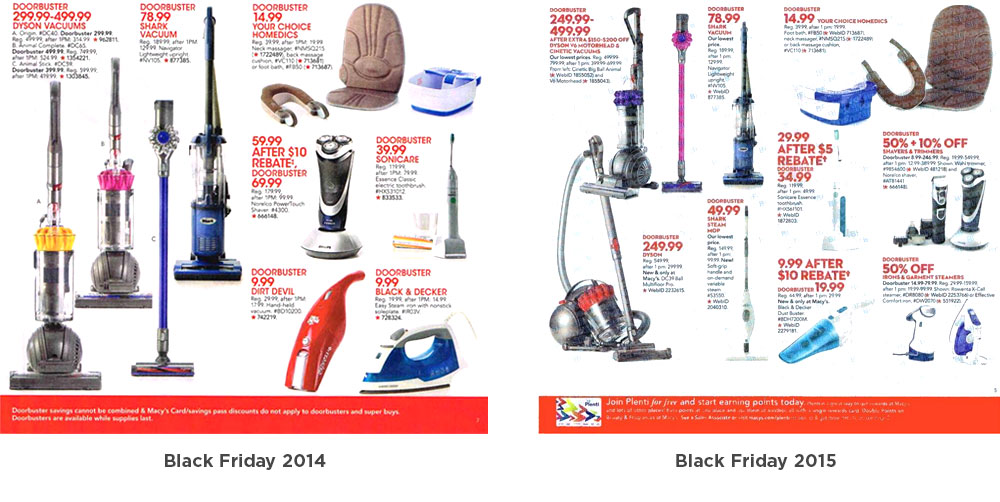 Discounts aren’t always what they appear

And there are other naughty retailer tricks that threaten to spoil the cheer of Black Friday shopping.

In some instances, stores inflate the “original” price of a product, often listing the manufacturer’s suggested retail price rather than the price it was selling for before Black Friday. This makes the discount appear larger — hence all the bold claims of discounts of 60%, 70% and more off.

For instance, this Black Friday, Macy’s offers a Samsonite Luggage Cape May 2 21” carry-on bag for $99.99. This store’s ad contrasts that with the suitcase’s regular price of $260. A big sale, right? Wrong. We found the exact same suitcase on sale for $116.99 at Macy’s earlier in November. After applying a sitewide Veterans Day promotion, the price was $99.44. So instead of getting a perceived discount of $160.01, shoppers will pay 55 cents more on Black Friday. 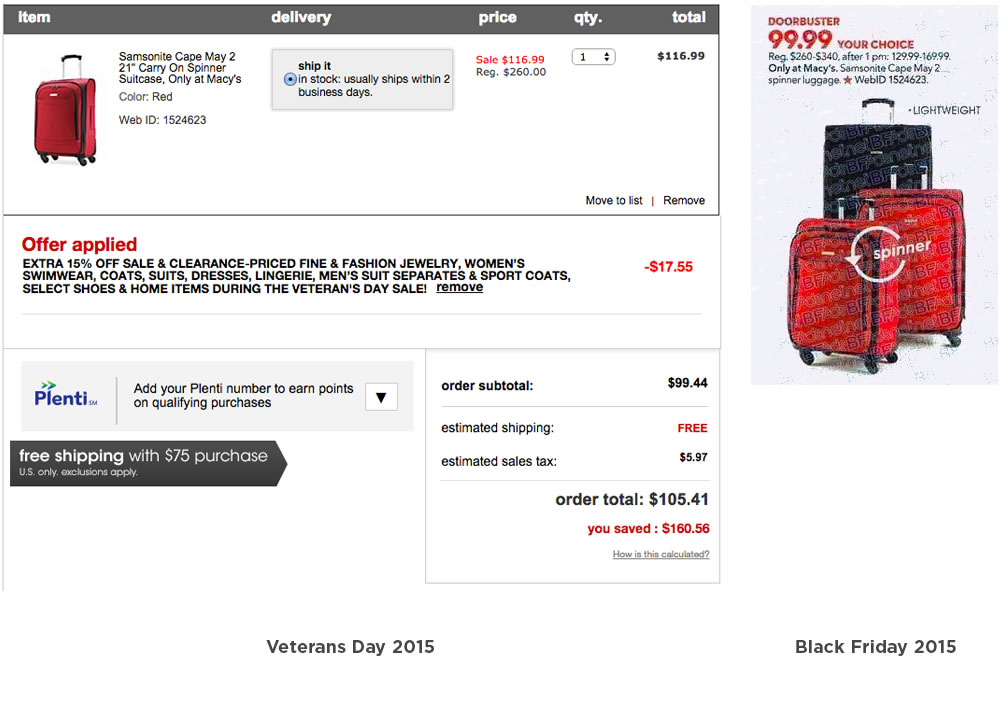 The story’s similar at Dell, where a Samsung 32-inch LED TV will be on sale for $177.99 during the retailer’s 2015 Black Friday sale. This would appear to be a savings of $142, compared with the advertised “market value” price of $319.99. But we found the same TV available for $197.99 in early November, making the discount only $20. The TV does come with a $50 eGift Card toward a future purchase as part of the Black Friday deal, but it’s still a far cry from the advertised savings off the $319.99 market value. 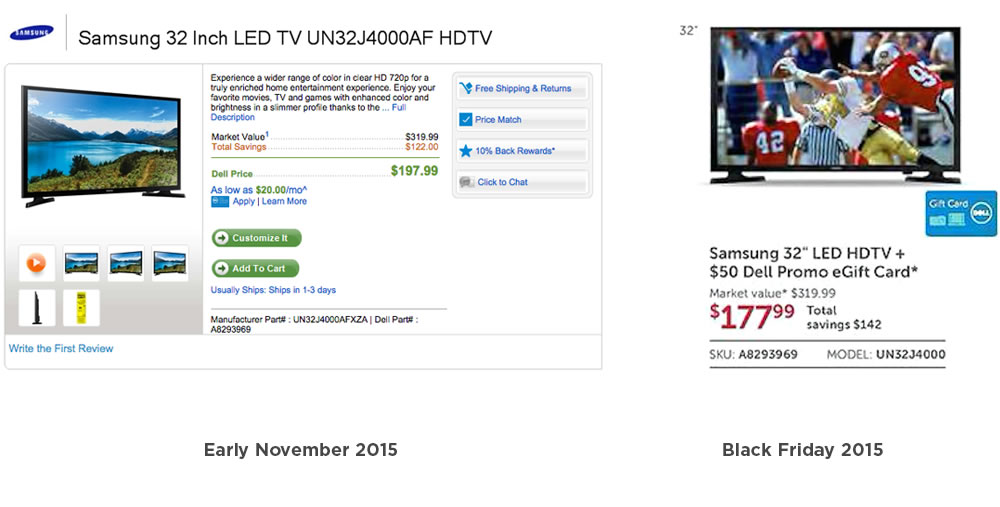 It’s important for shoppers to ignore the Black Friday percent-off claims, as it’s very likely that the advertised amount of the discounts may be inflated.

“It’s important for shoppers to ignore the Black Friday percent-off claims, as it’s very likely that the advertised amount of the discounts may be inflated,” Chan says. “Instead, shoppers should look at the sale price of the item and determine if it’s a price they’re willing to pay.”

Another thing to keep an eye out for — different “original” prices at different retailers. Depending on where consumers shop, they may see different amounts of perceived savings. This is one way retailers essentially trick shoppers into believing they’re saving more than they truly are.

Furthermore, this Keurig model was listed at a sale price of $119.99 at Macy’s earlier in November, not the $174.99 regular price shown in its Black Friday ad. After applying a sitewide Veterans Day promotion, the Keurig model was $107.99, making this Black Friday deal not as big of a bargain as it originally appears.

The hardware retailer is also inflating prices on a large scale this year. Last year, the store listed “regular” prices for discounted products in its ad to give shoppers a sense of how much they were saving. But this year, Harbor Freight has switched out regular prices for something called “comp” prices. We discovered that many of this year’s comp prices are dramatically higher than last year’s regular prices for identical items. The result is much higher base prices for the same products and overstated savings for shoppers. 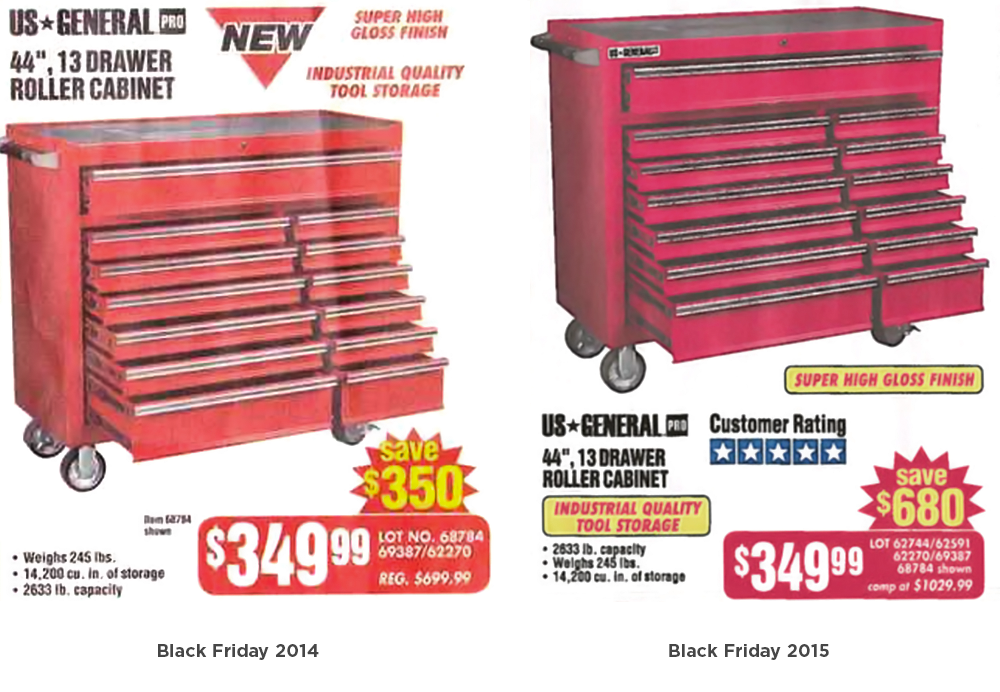 Black Friday prices come around more than once a year

Not only did our study find that major retailers repeat deals from Black Friday to Black Friday, but we also discovered that some Black Friday prices (or lower ones) can be found earlier in November. This challenges everything shoppers thought they knew about Black Friday being the best shopping day of the year.

For instance, this Black Friday, Sam’s Club is touting its $179 deal on the popular Samsung Galaxy Tab A 8-inch. But we found the same tablet on sale for $169 from the warehouse store on Nov. 14 of this year as part of a one-day-only deal. The 9.7-inch version of the tablet is advertised for $229 in both sale events.

Over at Sears, the Kenmore Elite 23.7-cubic foot French door bottom-freezer refrigerator is one of the retailer’s Black Friday deals, with a sale price of $2,299.99. But that model was sold earlier this November for $2,184.99. 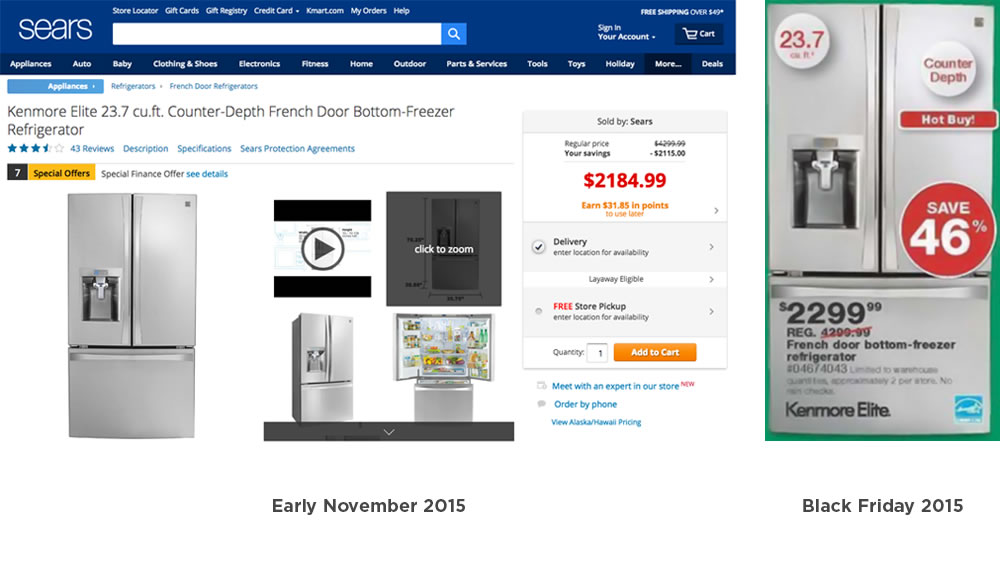 And if shoppers thought that Black Friday prices could only get lower each year, they should think again. We located several instances on everything from electronics to kitchen appliances in which the Black Friday 2014 price was better than 2015’s.

Consumers plan to spend more money this holiday season than they did last year — but they’re also planning to pay off holiday debt more quickly, according to NerdWallet’s recent survey with Harris Poll:

It appears that Americans are splurging a little more when buying holiday gifts this year.

“It appears that Americans are splurging a little more when buying holiday gifts this year,” says Chan. “One could attribute this to a lower unemployment rate compared to last year. What’s also interesting to note is that while consumers may be comfortable spending more, they’re doing so responsibly and plan to pay off their purchases quickly.”

How to maximize your savings this holiday

Follow these tips to get the most bang for your buck this Black Friday and throughout the holiday season:

Be savvy when you shop.
Never make a purchase until you’ve compared prices between retailers and applied any relevant coupon codes. This can be done by downloading price comparison apps or conducting a quick online search.

And no matter where you shop, always know the return policy before you buy.

Don’t let money go to waste, use price protection.
According to NerdWallet’s recent survey, only 28% of Americans have taken advantage of a price match on a purchase they found for less at another store in the past 6 months. This leaves up to 72% of Americans who may be missing out on this cost-saving option.

Certain credit cards offer price protection. Learn the rules for your card's price protection program (sometimes you need to register your purchases ahead of time) and get refunded if the advertised price goes down after you buy.

“Price protection is crucial because it means you won’t have to shop on any particular day to get a great deal,” says Sean McQuay, NerdWallet credit card associate. “You can take advantage of sale prices later by getting a refund of the price difference.”

Take advantage of your credit cards.
If you have a rewards credit card with a high cash back rate or a card with extra rewards on relevant purchase categories, consider using them this holiday season. For instance, consider using a card that gives extra rewards on grocery store purchases to buy gift cards, since many supermarkets sell gift cards to top retailers and restaurants.

Finally, if you’re looking to buy something major (such as a big appliance or a high-end TV), check the details of your credit card to see if your company offers any extended warranty protection.

While some retailers repeated more than one item at the same price in both their 2014 and 2015 ads, we chose to list only one item per store in order to simplify our data presentation.

For the holiday shopping survey portion of this NerdWallet study:

These online surveys are not based on a probability sample and therefore no estimate of theoretical sampling error can be calculated. For complete survey methodology, including weighting variables, please contact Jessica Ayala at [email protected].