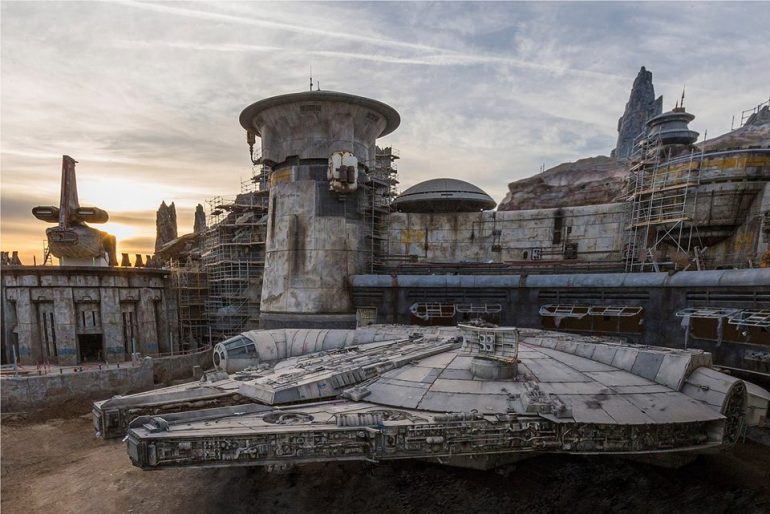 The “galaxy” is coming to Southern California and Orlando, Florida, in 2019.

It’s not quite so far, far away anymore.

Here’s the scoop on how Disney theme parks do “Star Wars” from a MickeyVisit.com expert.

Walt Disney Imagineering, the group behind the designs of the Disney theme parks, has created a new planet for this experience in conjunction with the Lucasfilm Story Group. The new planet, Batuu, is a remote planet in the Outer Rim Territories.

The planet itself is not a part of the movies but it has existed for thousands of years in the Star Wars storyline. This planet is said to be a rough-and-tumble place featuring an outer frontier trading post that’s home to the likes of smugglers and rogue traders. Guests can expect to see some familiar characters such as BB-8 and Chewbacca, too.

Disney has committed to making this a completely immersive experience that will allow guests to feel like they’re actually living on the planet of Batuu. You won’t see Coca-Cola products or shirts that say Star Wars. Everything is planned to be authentic to the Star Wars storyline.

The success of guests’ piloting abilities will change the way characters in Star Wars: Galaxy’s Edge interact with that guest. For example, if you crash the Millennium Falcon, a smuggler on the street in Batuu could call you out for your poor flying abilities.

Star Wars: Rise of the Resistance

The First Order Fleet ride called Star Wars: Rise of the Resistance will be a massive trackless ride that brings guests along on an epic battle between the First Order and the Resistance. You can experience different scenes each time you ride, such as flying past AT-ATs or facing off with Kylo Ren.

» Learn more: Landing the best airfare is a matter of timing

The immersive experience will carry over into the restaurants and shops in Star Wars: Galaxy’s Edge. So even in shopping and dining areas, you won’t see Disney cast members dressed up in the type of uniform you’d see in other areas of the park. Rather, they will be dressed to blend in with their surroundings to help guests feel like they’re in the world of Star Wars.

The restaurant in Star Wars: Galaxy’s Edge will be called Oga’s Cantina, and it will resemble a cantina similar to Tatooine’s Mos Eisley cantina. The restaurant will sell alcohol, which will be a first for Disneyland. At this cantina, guests can try food and drink inspired by Star Wars, such as the famous blue milk. Guests can barter for the cost of their food and meet familiar faces from the Star Wars universe.

Also, Walt Disney World is getting its own immersive Star Wars hotel, which will completely transform guests into characters in a Star Wars story from the moment they arrive.

Planning a trip? Check out these articles for more inspiration and advice:
How to get the most out of your Disney Christmas vacation
Disney vacation pros dish up budgeting tips for trips
Find the best travel credit card for you

Lindsay Brookshier is the editor of MickeyVisit.com. She writes vacation guides about the Disney parks and covers Disney pop culture trends. Read more