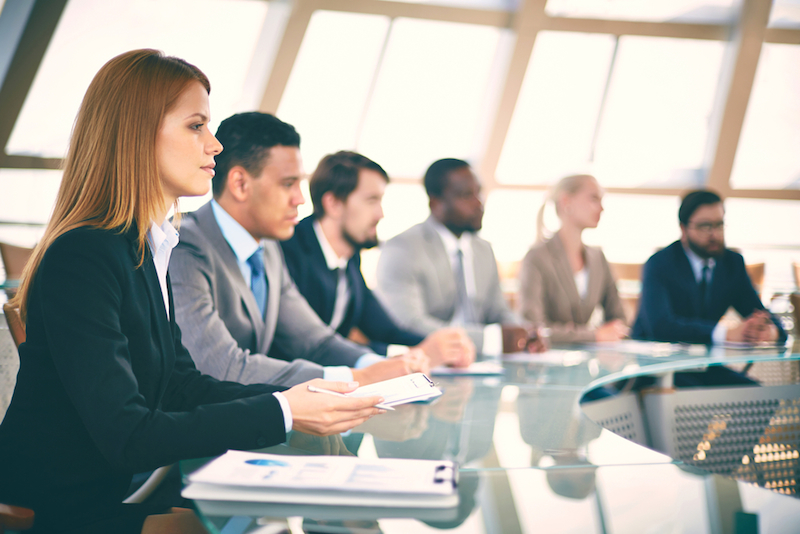 Women’s complaints of sexism in the office may fall on deaf ears. After all, according to many workplace surveys, women are doing better than they ever have.

The U.S. Department of Labor found that 57.2% of American women of working age participate in the labor force—though workforce participation in general is trending downward. More women are reaching leadership positions than ever before. Nearly two of every five managers are women—double the number 40 years ago, U.S. Census Bureau data shows.

But a new glass ceiling appears impervious to the shattering momentum made by women in other areas of U.S. working life. The number of women on corporate boards has plateaued in recent years, raising alarm bells for gender parity groups.

“Once again there’s been little to no increase for women on boards in corporate America,” says a December report by Catalyst, a nonprofit that champions workplace diversity. Women held only 16.9% of board seats, the eighth straight year of flat growth, in a Catalyst audit of Fortune 500 companies.

Many boards don’t include any women. Late last year, the New York Times found that 36% of America’s largest public companies have male-only boards.

CEOs and corporate boards tend to select executives that mirror their experience, interests and—more often than not—gender, research shows. “It’s not that people don’t think women can do the job,” says Deborah Rieman, executive chairman of the board at Metamarkets, an analytics firm. “But boards tend to pick somebody who they unconsciously think fits the mold.”

The ramifications are not only societal, but also financial. Study after study shows that companies with a higher ratio of females at the top outperform companies whose leadership is dominated by men.

Why? Companies with greater gender parity better reflect the customer base they are seeking to capture, says Sue Meisinger, former CEO of the Society for Human Resources Management. “If you’re in consumer goods, you want to have a woman’s perspective. You can’t ask a board member to be the spokesperson for all women, but it does enhance the discussion,” she says.

Regardless of the industry, women are valuable board members. Says Libby Sartain, former CHRO of Southwest Airlines and Yahoo, “Boards can benefit from having diversity of thought. If everyone has the same experience, the board may miss opportunities or problems to be addressed.”

Why are so few women on boards?

The oft-biased board selection process Rieman mentions directly contributes to the gender gap. It creates a feedback loop by which women feel unworthy of higher-level positions.

Stephanie Cohn Rupp, CEO of Toniic, an international impact investment firm, says, “For years, I never had the courage to apply for leadership roles. Even when I applied for my current role, I thought I may be too junior to be considered.”

Of course, women must take responsibility for their own advancement. “Everyone experiences obstacles in their careers, so I didn’t spend much time thinking about whether particular obstacles were due to my gender, but more about how to resolve them,” Sartain says.

But women’s efforts to transcend confidence issues are meaningless without the right opportunities. Meisinger recalls being asked to a board after meeting the company’s CEO at a networking event held by Catalyst.

“It’s very much a relationship-driven selection process. That can work to the detriment of women if women aren’t able to be in social groups where these relationships are built,” says Meisinger,

The fields women pursue also affect their board representation. Many boards still prefer those with finance experience. And while men and women in the U.S. earn a similar number of business degrees, women make up only 23.1% of the senior officers in the finance and insurance industries in the Financial Post 500, Catalyst finds. In computer science, an industry of increasing importance to tech boards, the numbers are lopsided from the outset. Men get 82.4% of degrees.

Those women who are able to get on boards face additional—and often gender-based—obstacles to advancement. Cohn Rupp notes that her self-doubt would surface in meetings. “I’d get great feedback on my substance, but be told that I needed to speak with more executive presence. As a result, you start focusing on the veneer of your communication, the ‘how’ rather than the ‘what.’”

She adds, “The first board I was on, one of the more senior guys would call me ‘kid.’ I tried to understand that it could be seen as affectionate, but it would deflate my contributions.”

What helps women get on boards?

No one factor will increase female board representation; education, boards and women all have a part to play.

Colleges and universities can steer female students toward certain majors—ones with greater potential for upward mobility. Dr. Rieman commends Harvey Mudd College, a small science and engineering school in California, where women now make up 45% of computer science graduates, after an effort spearheaded by President Maria Klawe. Mudd’s success suggests that other schools, and other male-dominated majors, could shift through similar programs.

Degrees aren’t the only answer. Female business graduates still face much different outcomes than male business graduates—partly because they have a difficult time gaining board representation. Meisinger says that boards look for people with CEO experience, which is to say people already on the board. “One of the impediments is that there’s not enough turnover,” she adds. “Building some focus on term limits into the governance structure is one way to approach it.”

Interested board members can take further steps to ensure that their boards are representative of their company’s employees, customers and other stakeholders. Cohn Rupp recommends that before boards mention names to fill vacancies, they agree on a target skillset and areas in which the board may need to diversify, including—but not limited to—gender.

In order to mandate inclusivity, she also suggests board members of for-profit companies push to become certified Benefit Corporations, or companies that promise to further environmental and social goals. She explains, “In order to become a Benefit Corp., you have to have a certain number of women on your board. It becomes a part of the skeleton of the board.”

Fortunately, there’s already some good news. According to Sartain, “Enlightened boards are looking for younger people, including women, who have experience with social media, Internet marketing or technology so as not to be disrupted by startups that could create technologies to take market share.”

Meisinger agrees that some boards are growing more flexible. “A lot of debates going on with executive compensation have created more interest in having someone with [human resources] expertise. Since women heavily dominate HR, you’ll see more women on boards.”

This means that women may be able to reach corporate leadership positions by doing what they love, which is ultimately the best solution. “If you find what you’re doing is exciting to you, and you’re always looking around for what you can do next, that’s the best path to success,” Rieman says.

There are other steps women can take to be competitive. Cohn Rupp warns, “Be cautious about what feedback you internalize, whether positive or negative. The feedback, even from other women, may be a reflection of the old system.”

And though it won’t solve every problem, all agree that drive goes a long way. Sartain advises, “No matter what job you’re assigned, exceed expectations—even while keeping an eye out for your next promotion or opportunity.”

Meisinger adds, “If you’re given an opportunity, go for it, even if you doubt your qualifications. I was never promoted into a position that I wasn’t fearful of on some level. Anybody going into a job will have a learning curve. Why can’t it be you?”

Woman in meeting image via Shutterstock.