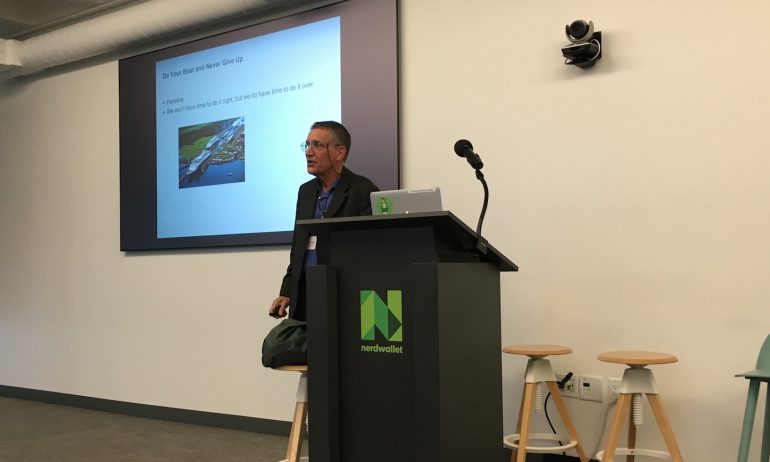 This post was written by Sara Colvin, internal communications associate.

On Nov. 5, 2018, Silicon Valley legend and NerdWallet advisory board member David Henke visited our office to give a NerdTalk. The presentation, titled “Every Day Is Monday in Operations,” mined David’s own experience in engineering and operations — from his 25 years as an individual contributor to his later years in technology leadership, including as senior vice president of engineering/operations at both Yahoo and LinkedIn.

As anyone who’s met David knows, his energy and passion are unflagging. Over the course of the talk, he touched on both his successes and his failures, using personal anecdotes to illustrate what makes for a good manager and how product, engineering and operations functions can collaborate most effectively. And while he’s officially retired, he remains active in the technology community and beyond. In addition to serving on NerdWallet’s advisory board, David is on the board of directors or technical advisory board at several other Silicon Valley-based startup companies, including Elementum, Brigade Media, Avid Secure and SignifAI. He’s also on the board of trustees for his alma mater, the University of California, Santa Barbara.

David started his career as a programmer in the Link Division at Singer Corporation and then at Hewlett Packard. From there, he founded two startups, CAE Systems and TeamOne Systems, both of which were acquired. After his stint in entrepreneurship, David joined Silicon Graphics as director of engineering. It was there that David discovered his talent for managing engineers and started on the path to more senior leadership positions. Asked how Nerds might grow into leaders themselves, David put the NerdWallet value “relentless self-improvement” into his own words: “You’ve got to watch, you’ve got to learn, you’ve got to train.”

NerdTalks is a series of informative, inspirational talks from industry leaders and innovators, designed to enrich Nerds as they pursue professional fulfillment and growth. Previous speakers have included Drew Houston, CEO of Dropbox, and Jules Maltz of Institutional Venture Partners.

Interested in working at NerdWallet? We’re hiring across a range of departments. Check out open positions on our careers page.