In this series, NerdWallet interviews people who have triumphed over debt using a combination of commitment, budgeting and smart financial choices. Their stories may even inspire you to pay off your debt. 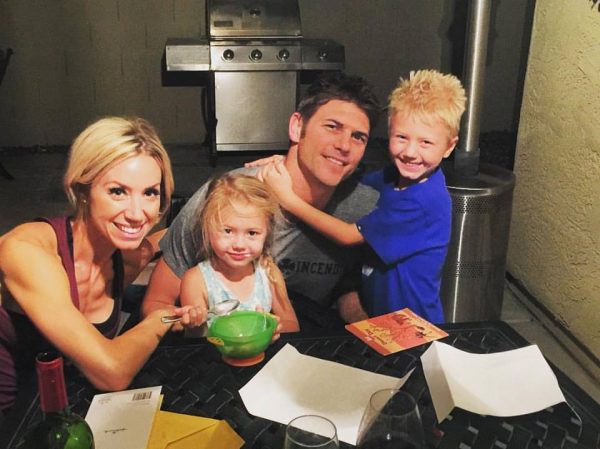 There was a time when Chris Peach and his wife, Andrea Robinson, didn’t think twice about spending money. Years of keeping up with the Joneses and never paying more than the minimum on credit cards ensured the couple lived paycheck to paycheck despite a six-figure household income. Within four years, they’d racked up $52,000 in debt.

Reality hit when the couple maxed out their credit cards and Robinson couldn’t pay for groceries for their growing family.

That’s when Peach, a firefighter by training, applied a step-by-step approach to taming their raging debt. The Phoenix couple paid off the entire amount within seven months by selling some of their pricey possessions, cutting discretionary purchases and starting a side hustle.

Peach created his blog, Money Peach, to teach others how to control their finances.

What was your total debt when you started your repayment journey?

Chris Peach: In 2011, we were completely broke, facing $52,000 of debt, which consisted of credit cards, a car loan, a medical bill and a student loan.

What is your total debt today?

We paid off all of our debt in seven months in 2011. Since then, we have never once gone a single cent further in debt. We still don’t have a single credit card, we have committed to never borrowing money again, and we have thousands of dollars sitting in reserves for a rainy day.

We didn’t end up in debt overnight, but rather it was a four-year journey of doing dumb things with our money. We never paid attention to the money coming in or going out. We said “yes” to everything.

We were more concerned with what others thought of us versus how well our bank accounts were managed. We went out and purchased a brand-new car right after we saw a commercial on television for it. We literally got off the couch, drove down to the dealership and signed a note for a new car within a few hours.

My wife is a television news anchor in Phoenix, which means she is often recognized in and around the city.

In 2011, it was a typical trip to the grocery store with our 10-month-old son along for the ride. She loaded up the groceries in the cart, said “hi” to a lot of the morning show viewers and then strolled up to the checkout.

All three credit cards she used were declined.

With a cart full of groceries to pay for, a cranky 10-month-old wanting to get home, a line of people who recognize her from television and three unsuccessful attempts to pay for the week’s groceries, my wife picked up our son from the cart and stormed off.

The next day we looked at what had happened. We had no money at all; we had maxed out all the credit cards. This was our rock-bottom moment.

What steps did you take to reduce your debt? What resources or services did you use?

I read every finance book I could get my hands on and asked financially stable friends what they were doing to have success in both their [lives] and money. My favorite resources I would recommend [are] anything from Dave Ramsey, Suze Orman, David Bach and Robert Kiyosaki.

As a firefighter, we are taught step-by-step methods to achieving a safe outcome. It allows us to be laser-focused on one thing at a time, mastering that step, before moving on to the next thing.

First, we created a cash-flow plan for each month. Then we made the decision to start removing the wants from our lives to get rid of the debt sooner. We cut off cable, sold everything and stopped spending on anything we considered a “want.”

We even went to an all-cash lifestyle after cutting up all of our credit cards.

Once we had put maximum effort into minimizing our spending habits, we then started to increase our income to allocate even more towards debt. I went door-to-door in Phoenix and launched a small pool-cleaning business within my own neighborhood.

We take amazing vacations as a family using only cash. We buy cars, pay for groceries, go out to dinner and live an incredible life on 100% cash. We now have a lot more money to give, we are rapidly paying down our mortgage, and we invest 20% of our gross income into retirement accounts.

How has your credit been affected by an all-cash lifestyle?

Many people think this is crazy, but we don’t plan on borrowing money again or going into debt again. You need a credit score to do both. Here’s the funny thing: In 2011, when we were deeply in debt, living paycheck to paycheck and completely broke, we had a credit score of 780. Today, we have large cash reserves, growing investments, zero consumer debt and a credit score of 640. We are 100 times more stable financially than we were in 2011, yet the credit score would tell you just the opposite.

What is your single biggest tip for someone looking to get out of debt?

You must get started today. If you don’t take that next step, the chances are way too high you won’t ever get started.

Don’t get overwhelmed and try to do 19 things all at once. Once you simply start paying attention to the money coming in and going out, you are going to have the choice to intentionally send as much of your income to pay off your debt as quickly as possible.

The couple took drastic measures to eliminate their debt. If you aren’t able to do the same, you can still try Peach’s step-by-step philosophy.

If you’re able to pay off your credit cards, congratulations. But we suggest you continue to pay attention to your credit scores, which can affect your car insurance rates and your ability to rent an apartment and even get certain jobs. And great credit is a powerful tool if and when you decide to borrow again.