Most Americans in the Dark on Key Deductions and Rules

Are you getting all of your deductions this tax season? According to a new NerdWallet survey, many Americans think some legitimate tax-reduction strategies are illegal, which could be leading them to miss out on money-saving deductions.

In online surveys of more than 2,000 U.S. adults each, commissioned by NerdWallet and conducted by Harris Poll, we polled Americans on legal and illegal tax-saving strategies, tax bracket knowledge, concerns about filing taxes incorrectly and understanding the new tax bill. Here’s what we learned:

Americans are missing out on legal tax-saving strategies

According to our tax-filing survey, many Americans are confused about which tax-saving strategies are legal. We asked them about the legality of the following activities:

Most Americans know that activities such as not including “under-the-table” tips and income (90%), overstating donations (96%) and not reporting gambling income (97%) are illegal. However, many Americans think some legal tax-saving activities are illegal, too. Roughly 9 in 10 think taking a home office deduction when your office is used for activities other than work is illegal, and three-quarters believe contributing to an IRA after year-end but before the tax deadline (75%) is against the law. 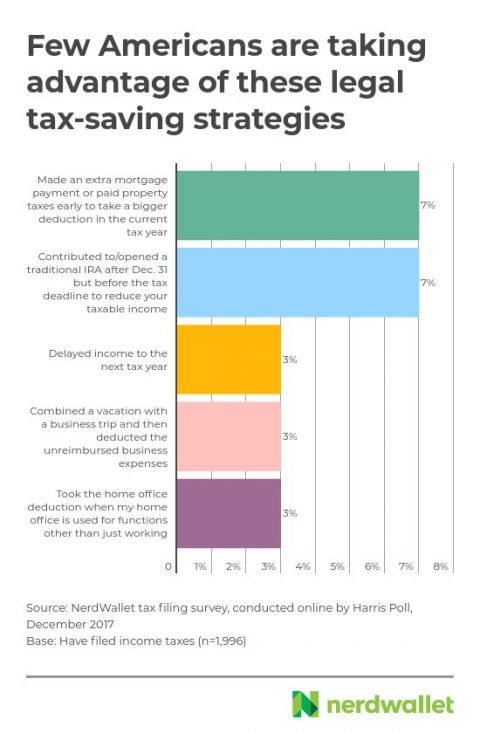 Only 16% of Americans who have filed income taxes have taken advantage of at least one of the five legal tax-saving strategies listed above.

Some Americans have used illegal tax strategies to cut down on their tax bill. A larger portion of millennials (ages 18-34; 20%) have participated in at least one of the illegal activities shown in the chart below than Generation Xers (ages 35-54; 15%) and baby boomers (aged 55+; 10%).

Of course, most Americans err on the side of safety, likely because they’re concerned about what could happen if they file their returns incorrectly.

» MORE: Monitor your finances with NerdWallet

Americans are concerned about filing their taxes incorrectly

More than 1 in 10 Americans (11%) say that they wouldn’t be worried if they discovered they had filed their income taxes incorrectly; but it’s a logical concern to have, as the consequences can be serious. For the rest of Americans (89%), the biggest worries are getting audited (28%) and having to pay more after filing (21%). 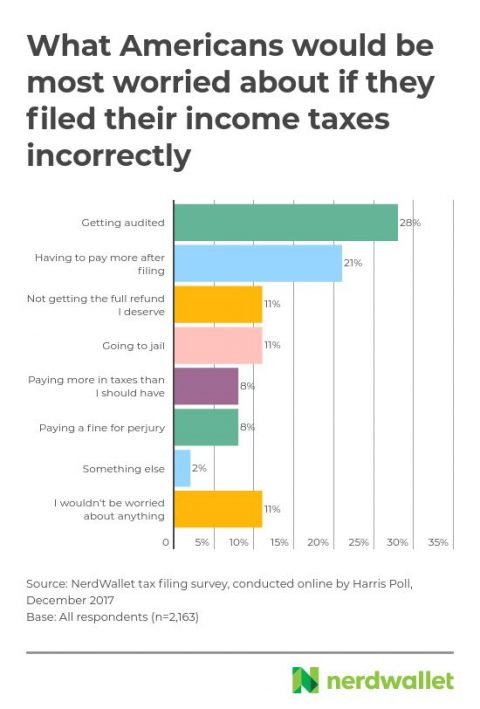 About a quarter of Americans think they’ll be audited

Last year, we surveyed Americans about what federal income tax bracket they were in for the 2016 tax year, and 2 in 5 reported that they didn’t know. For the 2017 tax year, this has increased, with almost half of Americans (48%) unsure of their tax bracket.

However, we asked Americans to indicate whether they thought several statements about the tax year 2017 were true or false, or if they were not at all sure. The percentage of those who answered incorrectly is largely unchanged from last year:

Deducting 529 plan contributions: Contributions to a 529 college savings plan aren’t tax deductible on your federal taxes, but many states offer such a deduction. The federal benefit from 529 plans is that earnings are tax-free if used on qualified education expenses. Parents (91%) are just as likely as nonparents (92%) to answer this incorrectly.

Deducting volunteer mileage: Mileage from driving back and forth for volunteer work can be tax-deductible. For 2017, the mileage deduction is 14 cents per mile or your actual variable costs of operating your vehicle for volunteer purposes, like gasoline and oil. Your fixed vehicle costs — like depreciation, payments and insurance — aren’t deductible.

Adjusting federal tax withholdings: The number of allowances you claim affects how much tax you pay with each paycheck, and that affects whether you get a refund or owe a bill at tax time. Taxpayers can change their withholding elections at any time.“If you’ve had any major changes in your life since you last filled out a W-4, such as getting married or divorced, having a baby, or buying a house, consider filling out a new form to adjust your withholding,” says Andrea Coombes, an investing and retirement specialist at NerdWallet.

“Also, given the new tax law, you might want to check your withholding in 2018, just to be sure the new withholding calculations suit your situation,” Coombes says. Check out our tips for how to fill out a W-4.

Tax law is changing, but many Americans aren’t sure how

Americans have varying opinions on whether the new tax law will be good or bad for the U.S. economy over the short term and long term: 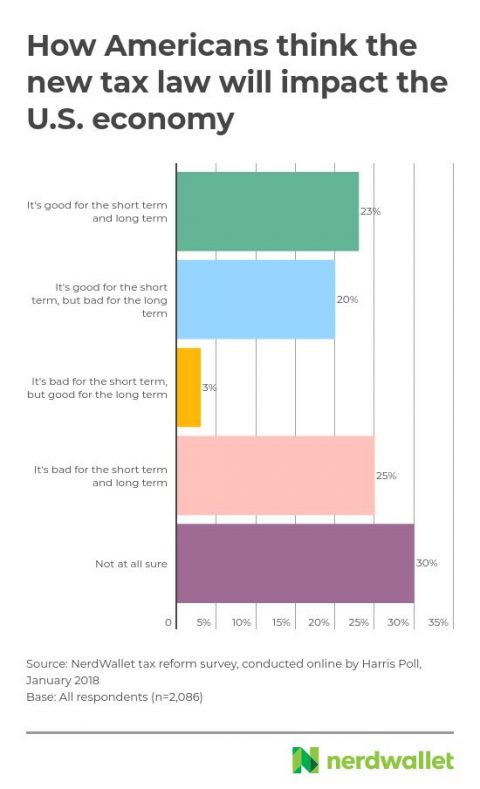 While most Americans know something is changing under the new tax law (74%), not everyone knows exactly what that something is. Only about half of Americans (49%) know that income tax brackets are changing under the new tax law, and only 34% of millennials know this. Across the board, millennials are least likely to be sure of what tax rules are changing, followed by Gen Xers and then baby boomers — respectively, they answered “not at all sure” at 38%, 24% and 17%.

Here’s how Americans responded when we asked what was changing under the new tax law: 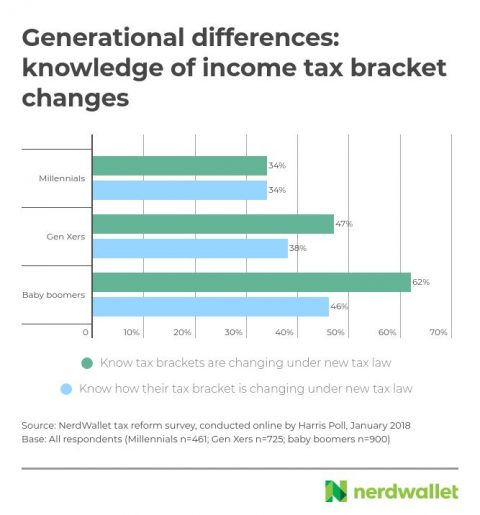 Here’s what you should do

There are several things we recommend doing to better understand your taxes and avoid paying more than you have to this tax season:

Estimate your tax burden for 2017: Don’t be caught off guard when you sit down to do your taxes. Plug your income, deductions and credits into NerdWallet’s federal tax calculator to get an idea of what you’ll owe in April.

Familiarize yourself with the new tax law and how it will impact you: Understanding the new tax law and its impact on you will help you make financial moves to save on taxes in the future. The tax law itself is over 1,000 pages, but NerdWallet has broken it down to make it easier for you. Find out if your taxes will go up or down under the new tax rules.

Consider hiring a tax professional or use reputable online tax software: “To make sure you don’t file your taxes incorrectly and unintentionally attract the IRS’ attention, be sure to use a highly rated tax preparer, whether you hire a pro, like a certified public accountant or enrolled agent, or use online tax software,” Coombes says. Here are 7 questions to ask before you hire a tax professional and an overview of the best tax software for 2017.

Understand your tax bracket and how it’s changing: There will continue to be seven tax brackets in 2018, but they’re changing a bit. For more information about tax brackets and rates for 2017, and to help you determine your tax bracket under the new tax law, check out NerdWallet’s guide to 2017-2018 federal income tax brackets.

Also note that there’s a difference between tax avoidance and tax evasion. Evading taxes is a crime; avoiding them within the constraints of the law is savvy. The following activities are perfectly legal, as long as you follow the IRS rules:

Making an extra mortgage payment or paying property taxes early to take a bigger deduction in the current tax year: “For people who fall near the break-even point for itemizing — that is, they have deductible expenses but those expenses add up to about the same amount as the standard deduction — bunching deductible expenses into one year might be worthwhile,” says Coombes. That way, itemizing in one year makes sense, followed by taking the standard deduction the next year.

Delaying income to the next tax year: It’s legal to ask your employer to pay out a bonus in January instead of December, or delay billing clients until the new year. But keep in mind, you will owe taxes on this delayed income next year.

Taking the home office deduction when your home office is used for functions other than working: The rules for the home-office deduction are complex. One key provision is that it’s possible to deduct the expenses related to the area of your home used for work. “You don’t have to designate an entire room as your home office, but it’s vital that the area you claim — the actual square footage — is devoted to work and nothing else,” Coombes says. For example, you can claim part of your spare room as a home office, as long as that part of the room is exclusively used for work.

NerdWallet makes managing your money easy with a single view of your finances. Sign up for free.