Southwest, like many other airlines these days, has eschewed a traditional award chart in favor of a fare-based award system. For travelers, that means the number of points you’ll need for a flight can fluctuate depending on the fare type, demand, destination and other factors.

So what does that mean for you if you’re trying to figure out how many miles you’ll need for your next trip? We’ll help demystify Southwest Airlines’ award system in this straightforward guide.

While some airlines use a distance- or zone-based award chart dictating how many miles you’ll need to redeem an award flight, Southwest Airlines doesn’t. Instead, the redemption rate is tied directly to the cost of the fare. Take a look at the chart below to see what we mean. 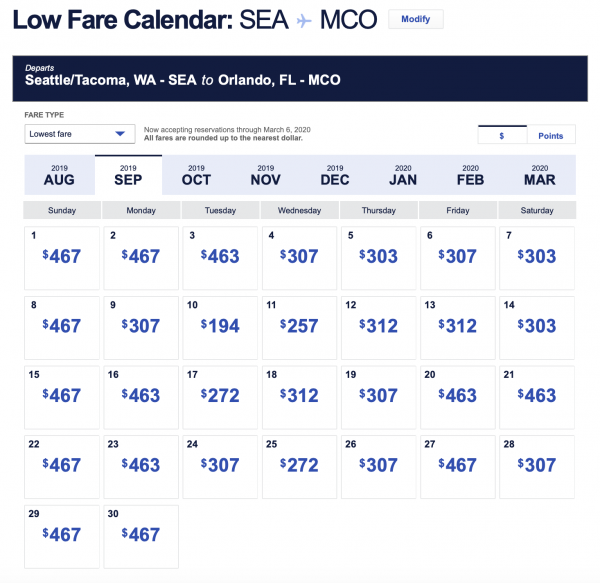 Southwest Airlines cash fares for flights from Seattle to Orlando 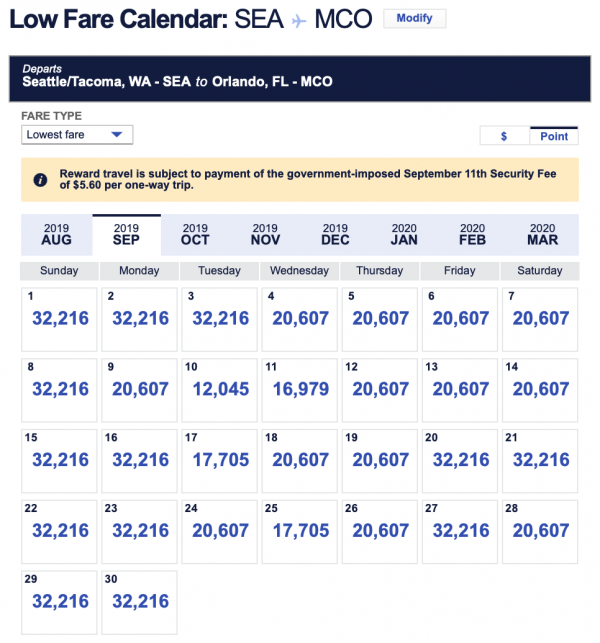 As you can see, the lowest number of points required for an award flight on a given day is based on the lowest cash price of the same flight.

If your travel plans are flexible or you catch one of Southwest’s fare sales, you can get a pretty good deal on award travel. If not, you might get stuck shelling out a lot more of those hard-earned points than you anticipated. For reference, NerdWallet values Southwest points at 1.4 cents each.

What you need to know about Southwest Airlines awards

Southwest Rapid Rewards has no blackout dates or capacity controls on award flights. That means you’re more likely to find a seat on the flight you want, when you want, no matter how many award seats have already been sold. If a flight can be purchased in cash, it can be reserved with points.

2. No change or cancellation fees

Whether you’re booking with points or cash, Southwest allows free changes. All you have to do is pay the fare difference, if there is one. If you cancel a Wanna Get Away cash ticket, your fare will be refunded in the form of travel dollars that must be redeemed within 12 months. Business and Anytime cash fares can be refunded to the original payment form.

Southwest offers three fare types: Wanna Get Away, Anytime and Business Select. All three include two free checked bags and charge no fees to change your booking.

Wanna Get Away fares require fewer points and seem to fluctuate in cost more than Anytime fares.

Fly with Southwest often and you’ll find more points aren’t the only benefits you’ll receive for your loyalty. Southwest rewards its members with two elite tiers: A-List and A-List Preferred, along with the ability to earn the Companion Pass after a certain number of miles flown.

Rapid Rewards members who manage to fly 100 qualifying segments or earn 110,000 qualifying points (125,000 in 2020) receive the coveted Southwest Companion Pass. This invaluable benefit enables you to designate a travel companion, who then gets to travel with you free of charge.

You don’t have to earn the points via flying to qualify for the Companion Pass — points earned from Southwest co-branded credit cards also qualify toward this requirement.

» Learn more: Airline elite status: Is it worth It?

All three cards usually offer a similar sign-up bonus. With all of them, you’ll earn 2 points per dollar on Southwest purchases and 1 point per dollar on everything else.

As for the differences, the Southwest Rapid Rewards® Plus Credit Card comes with a $69 annual fee and offers an additional 3,000 points on your account anniversary.

The Southwest Rapid Rewards® Premier Credit Card rewards you with 6,000 points, elite-qualifying points and no foreign transaction fees but costs $99 per year.

The Southwest Rapid Rewards® Priority Credit Card offers the most bang for your buck. There’s a $149 annual fee, but you’ll receive 7,500 extra points on your anniversary, an annual $75 Southwest travel credit, 20% back on in-flight purchases and four upgraded boardings per year. This is beneficial, since Southwest doesn’t do assigned seating.

While Southwest Airlines’s lack of award chart doesn’t allow for a lot of room for planning and can fluctuate greatly where the cost of award travel is concerned, the airline does offer a lot of other benefits. And thanks to off-peak travel and frequent fare sales, travelers can still find decent deals on award travel with Southwest.

Planning a trip? Check out these articles for more inspiration and advice:
Find the best travel credit card for you
Which Southwest Airlines credit card should I get?
Southwest Rapid Rewards Plus review: Solid rewards for less 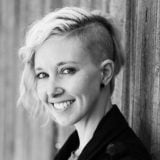 Alisha McDarris is a freelance travel writer and photographer. She is the creator of Terradrift.com. Read more