More than 16 million Americans with subprime credit scores — below 600 — are carrying credit cards. Many of them do so in the hope of improving their credit and unlocking the benefits that come with a higher score. But the cards they’re carrying may be costing them billions of dollars a year in unnecessary fees — and the subprime credit card market isn’t helping them get ahead.

Last year, NerdWallet looked at predatory practices in the subprime credit card market, such as lengthy, hard-to-understand card agreements and the targeting of offers to less-educated Americans. In 2017, we’re shining the spotlight on the costs of subprime credit cards and how they impede credit building.

NerdWallet’s annual Consumer Credit Card Report is an in-depth analysis of the credit card landscape aimed at spotting the trends that are most important for consumers. We examined internal and external data to determine the aggregate cost of subprime credit cards, the ways consumers with subprime credit may be held back from improving their credit, and the direction the subprime market is going.

We also commissioned an online survey of more than 2,000 U.S. adults, conducted by Harris Poll in July 2017. We asked Americans about their credit card habits and attitudes, as well as what inspires them to improve their credit.

We’ll offer consumers better alternatives to costly subprime products and help them work to improve their credit within a difficult system.

Most credit cards are unsecured, meaning they require no collateral. The card issuer extends credit based only on the cardholder’s promise to pay the bill. The alternative is a secured card — one that requires a refundable cash deposit, usually equal to the card’s limit but sometimes less. The deposit reduces the risk to the issuer, so secured cards are an option for people with bad credit.

Generally, unsecured cards are available only to those with fair to excellent credit, but several issuers specialize in unsecured cards for those with bad credit. Many cards from these subprime specialist issuers charge a variety of fees that secured cards or regular unsecured cards don’t. They include application fees, processing fees, maintenance fees and authorized user fees. These cards also tend to charge annual fees of as much as 25% of a card’s credit limit and annual percentage rates, or APRs, near or exceeding 30%. [4] Meanwhile, secured cards often have lower annual fees and APRs — an average of less than $20 a year and less than 20% for the cards we considered.

Although secured cards require a deposit upon account opening, this cost is refunded to the cardholder when the account is upgraded or closed in good standing. All costs on SSI cards are nonrefundable.

These differences affect millions of Americans. According to the TransUnion credit bureau, there are more than 16 million Americans with access to a bank credit card who have subprime credit. If every subprime cardholder had one SSI card, the fees on those cards would collectively cost more than $2.5 billion per year. [2] This doesn’t include applicable interest charges or late payment fees.

“Subprime credit cards are the fake metal jewelry of the credit card world: They might look like the real thing, but in the end, they can end up hurting you,” says Kimberly Palmer, NerdWallet’s credit card expert.

We can’t know for sure how many consumers have SSI cards or how many SSI cards each consumer has. SSI issuers have not disclosed such figures publicly. Even so, it’s likely that these cards can be found in the wallets of a significant number of Americans with subprime credit. According to TransUnion, the average subprime cardholder has 2.48 credit cards, as of the first quarter of 2017. And according to the Federal Reserve Bank of Philadelphia, secured cards make up less than 1% of the total consumer credit card market.

What you can do: “While the allure of subprime credit cards can be tempting to consumers who have struggled to stay on top of their bills in the past, the good news is that there are other, less expensive options that allow you to build your credit over time,” Palmer says. “Secured credit cards, becoming an authorized user on a family member’s card, or taking out a credit-builder loan all offer cheaper pathways to building credit. Most important, make on-time monthly payments over time to demonstrate your creditworthiness. Then, once you have rebuilt your credit, you can apply for prime or even superprime credit cards, which generally carry fewer fees and lower interest rates.”

Subprime cards can actually make it harder to improve credit

Having subprime credit can cut off consumers’ ability to borrow money at affordable interest rates, or to borrow at all. It can also make it harder to find a job, rent an apartment or get affordable car insurance. But the subprime industry doesn’t seem to be doing much to help those consumers move up to fair, good or excellent credit. SSIs are less likely than mainstream credit card issuers to offer free credit scores. And credit limits for subprime cardholders are decreasing, which affects the second-most important factor in a credit score: utilization.

According to our poll, 15% of Americans surveyed say they would be inspired to improve their credit if they had regular access to their credit score. Of the 10 SSI cards we looked at, only one provided a free monthly credit score. [6]

This is a bigger issue for the largest generational group of Americans with subprime credit — millennials. Almost a quarter of 18- to 34-year-olds surveyed (24%) would be inspired to improve their credit if they had regular access to their credit score. According to TransUnion, almost 2 in 5 millennials (38%) have subprime credit, so this lack of credit score transparency could be holding many back. It’s hard for consumers to know whether and how they can improve their credit if they aren’t sure where they’re starting.

What you can do: For Americans of all age groups, we recommend looking for credit cards that offer free scores. If that’s not an option, many reputable websites offer free credit scores. They probably won’t be FICO scores — the most popular scoring model used by lenders — but they’re calculated using the same basic factors, so you’ll know how your credit is doing.

Most credit scoring models take into account five common factors: payment history, credit utilization, length of credit history, mix of account types and new credit. Credit utilization, the second-most important factor, refers to the amount of debt you have as a percentage of your credit limit. In other words, how much of your available credit are you using?

Experts recommend that you keep utilization below 30% for good credit health. So, if you have a credit card limit of $1,000, try to keep the balance below $300. The higher your limit, the easier it is to maintain low utilization. But limits on subprime cards have decreased dramatically in recent years, making this more of a challenge.

We found that utilization on the average subprime credit card was 94%, far above what’s recommended. Meanwhile, superprime consumers, with higher average limits on their cards, had average utilization of 11%. [3] Simply put, cardholders who need to improve their credit are effectively penalized with low limits, while those with great credit scores have access to additional credit they don’t use.

There are two ways to look at decreasing limits for subprime users. On one hand, they limit the amount of debt that consumers can accrue, which theoretically is good. On the other, they increase overall credit utilization, which can keep users from improving their credit scores.

“Credit utilization as high as 90% will hurt your score because it signals an overreliance on credit, which lenders might interpret as high-risk,” says Heather Battison, vice president of TransUnion.

What you should do: We asked Battison how Americans should deal with increasing credit card utilization.

“My suggestion for subprime consumers, or consumers in any risk tier with a low credit limit, is to work with what they have – don’t spend more than they can afford, pay all their bills on time and in full, and try to maintain about 30% credit utilization until they build enough credit to expand their credit line responsibly,” she says.

The subprime credit card market is inching toward pre-recession levels

The subprime credit card market isn’t done growing. According to the credit rating agency DBRS, subprime account openings were the fastest-growing segment of the credit card market between the third quarters of 2015 and 2016. As of 2015, 50% of Americans with credit scores below 620 had credit cards, according to the Federal Reserve Bank of New York. This isn’t quite at the pre-recession level of more than 60%, but it’s been trending up over the past few years.

According to Palmer, “A strong economy means we’re seeing credit card issuers increase the number of their subprime credit card accounts — but it also means that other, less expensive options are more easily available, too. Subprime credit cards might be easy to get, but they are not good to have.”

What you should do: According to our poll, 1 in 4 Americans surveyed (25%) feel much more or somewhat more negative about credit cards since the most recent recession. However, 40% of those surveyed say they didn’t change their credit card habits after the recession. The recession ended some time ago, but don’t forget it as you decide what to do with your money.

Paying off credit card debt and saving may not be the most exciting ways to use your cash, but it’s highly unlikely you’ll regret it, especially if another recession leads to job loss in the future. Even those who feel secure in their careers would do well to have a financial safety net.

Improving your credit can be an overwhelming endeavor, but your priority should be improving your finances. Paying your bills on time and making a plan to pay off your debt makes good financial sense, and as a happy bonus, these actions will elevate your credit score.

The survey was conducted online within the United States by Harris Poll on behalf of NerdWallet from July 17-19, 2017, among 2,117 U.S. adults ages 18 and older. This online survey is not based on a probability sample and therefore no estimate of theoretical sampling error can be calculated. For complete survey methodology, including weighting variables, please contact [email protected].

[1] We took the average fees of 10 popular SSI cards to determine the annual costs. The average total fees were $154.32 in the first year, and $165.52 in subsequent years. Fees included are annual, processing, maintenance and authorized user fees. We assumed that each cardholder had a second card for the account; without the authorized user fee, the cost would be decreased by an average of $22.20 annually or only during the first year, depending on if the fee is annual or one-time.

[5] We looked at 10 SSI cards identified in NerdWallet’s roundup of credit cards for bad credit and nine secured cards recommended by NerdWallet. Fee averages are rounded. 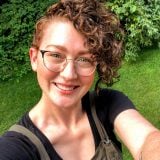 Erin El Issa is a credit cards expert and studies writer at NerdWallet. Her work has been featured by USA Today, U.S. News and MarketWatch. Read more