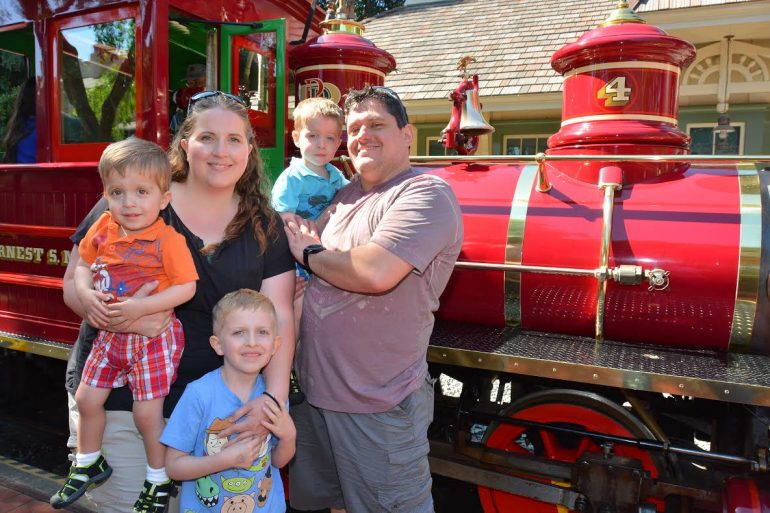 Becca Robins, founder of travel blog This Crazy Adventure Called Life, and her family in front of the Disneyland Railroad Train. Photo by the Disney PhotoPass Service, courtesy of Robins.

Taking a Disney vacation can be pure magic.

That’s what it feels like for Becca Robins of Boise, Idaho. She travels to Disneyland in Anaheim, California, about twice a year with her husband and three sons — one 7-year-old and 3-year-old twins.

“We really fell in love with it when we had our first son,” says Robins, who runs the travel blog This Crazy Adventure Called Life. She and her husband first took their oldest son there when he was 10 months old. “You’d see his eyes light up when he saw his favorite characters and the rides, and the whole experience was magical.”

» MORE: 7 Ways to save at Disneyland — no magic required

But going on these trips isn’t cheap, Robins acknowledges. That’s why she’s always looking for ways to trim costs for tickets, food, transportation and accommodations. If you’re planning to visit a Disney park — such as Disneyland in Anaheim or Walt Disney World Resort in Orlando, Florida — you can cut costs, too. Here’s how. 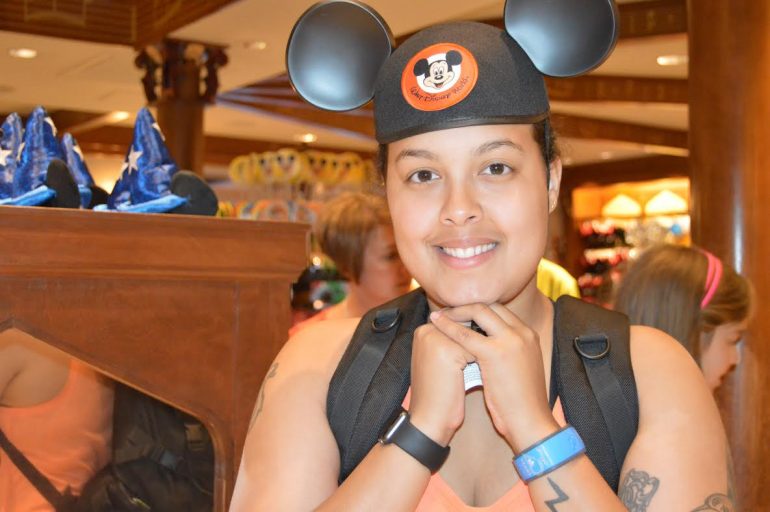 Visit on a ‘value day’

If you’re visiting Disneyland or Disney World for just one day, you’ll pay more on peak days and less on value days. And those price differences, posted on the park websites, can be significant. Consider the cost of a standard one-day ticket for someone age 10 or older, as of this writing, for example:

Kids ages 3 to 9 can get in for less, and you don’t need to buy tickets for kids under age 3. Although multiday tickets and annual passes are cheaper on a per-day basis and aren’t priced according to demand, they’re more expensive overall.

If you’re pinching pennies, don’t get the more expensive Park Hopper tickets that allow you to visit multiple parks in the same day.

“I’ve never actually gotten a Park Hopper [ticket] because usually I just pick a park and stick to that park for the day,” says Krystel Seijo, founder of the Disney budgeting blog Planning the Magic. “It’s not like I get bored or there’s nothing for me to do.”

Seijo first became interested in finding ways to save at Disney World in college when she was planning a visit with her little sister, who was 10 at the time.

Buy tickets at a discount

It’s hard to find huge markdowns on Disney tickets. But you might be able to get a more modest discount. For example, consider these deals:

Or look for discounted Disney gift cards before you go to the park, Seijo suggests, and use those to cover tickets.

Watch out for scams

Don’t buy tickets on eBay or other similar websites, Seijo warns. It might seem like a smart money-saving move in the short term, but you risk purchasing tickets that aren’t valid. 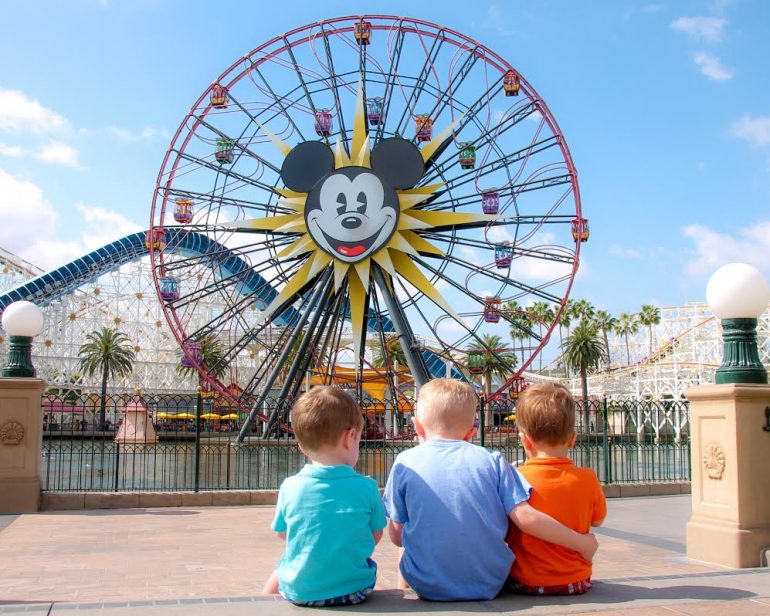 Disney parks offer onsite hotels, but those are often quite expensive. “It is very difficult to find rooms for under $100 a night in Disney World; it’s pretty much impossible at Disneyland,” says Robert Niles, editor of the ThemeParkInsider.com blog and former attractions host at Disney World’s Magic Kingdom. Go to a nearby offsite hotel to find lower rates, Niles advises.

For Robins, driving is the most cost-effective way for her family of five to get from Boise to Anaheim. Even though the trip takes about 14 hours, it’s worth it, she says.

“We can drive round trip for the same price as one round-trip [plane] ticket,” Robins says.

To trim spending, Robins brings sandwich-making supplies and keeps them in a locker she rents near the picnic area, near the main entrance of Disneyland. You can bring food to the park, as long as it follows certain guidelines listed on the park’s website. The cost of renting lockers is relatively low:

If your credit card earns points or miles, you may be able to redeem them for travel. That’s how Seijo, of Edison, New Jersey, has paid for some of her flights to Disney World.

“People spend, like, $1,000 a month on child care. Right there, that’s 12,000 points” per year, assuming you earn 1 point per dollar spent on those transactions, Seijo says.

Save money in the park 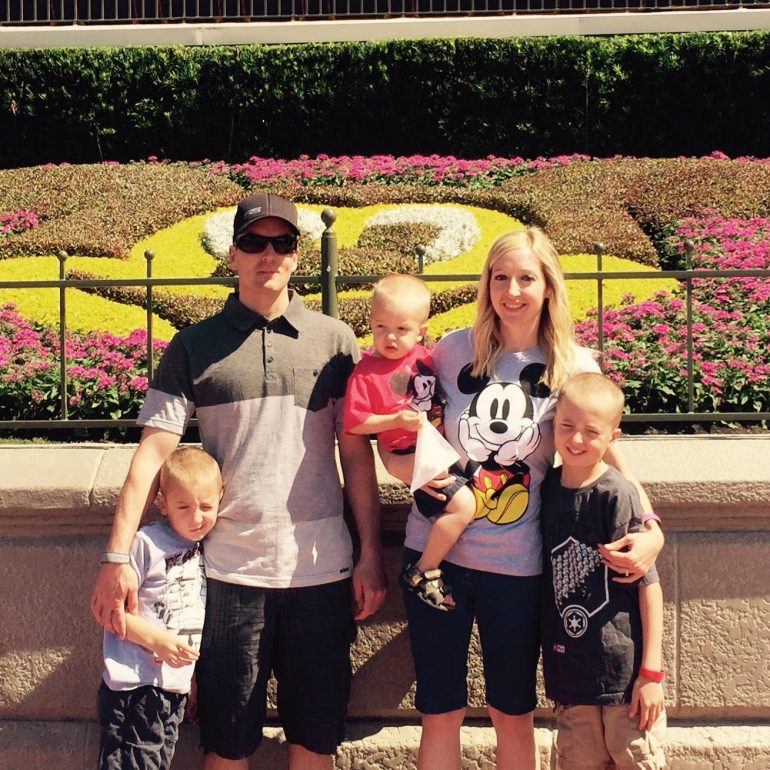 Mindy Moser, founder of the Disney blog The Mommy Mouse Clubhouse, and her family at Disneyland. Photo courtesy of Moser.

Buy Disney-branded items before YOUR VISIT

For Mindy Moser of Salt Lake City, limiting in-park spending is key to saving on trips to Disneyland and Disney World with her husband and three sons, ages 10, 8 and 3. That means shopping for Disney-branded items ahead of time.

“I’ll usually get Disney shirts at Target or Walmart before we go, because they’re a whole lot cheaper” than buying clothing in the park stores, says Moser, founder of the lifestyle blog The Mommy Mouse Clubhouse.

Give your kids a budget

Moser usually gives each of her kids $25 before the vacation to limit in-park spending on souvenirs, too. For her kids, it’s an opportunity to make shopping decisions and learn about budgeting.

“They usually buy something the last day, when they know what they want and they’ve thought about it for few days,” she says.

Dine out for less

Even if you pack most of your meals, you might want to visit one of Disney’s restaurants during your trip — and you can find ways to do so inexpensively. For starters, split your meals among family members or order smaller portions when possible.

“If it turns out you’re still hungry, you can always go someplace and order more food,” says Niles, of Pasadena, California. “They’ll always sell you more food, but they won’t refund you food you didn’t eat.”

You can also visit the parks’ websites to browse dining options, sort by price range and make reservations.