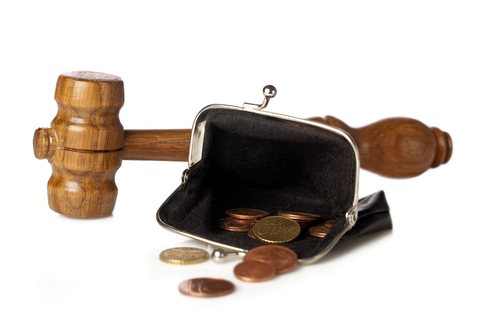 Losing a job or facing a medical crisis can mean tough financial times. Getting back on your feet may mean letting a credit card bill linger in favor of paying other necessities. Although this might be the right choice in the short term, failing to deal with debt could come back to bite you.

Eventually, you could have your wages garnished if you don’t pay your credit card debt. What does this mean, and how can you avoid it? Take a look at the details below.

What is wage garnishment?

Most people are familiar with wage-garnishment measures taken by the government if you don’t pay your taxes. If you owe Uncle Sam money, a portion of your paycheck will be withheld and sent to the Feds until your tax bill is settled.

Wage garnishment works similarly with creditors. If you borrowed money that you can’t or won’t pay back, the lender or debt collector can get a court order to garnish your wages. Again, this will mean that a slice of your paycheck is sent to your creditor until the debt is paid.

Your wages can be garnished for unpaid credit card debt

A common misconception about credit card debt is that there’s nothing your issuer can do if you don’t pay your bill. It’s true that credit card debt is unsecured, but that doesn’t mean the bank won’t pursue every option to get its money back. Unpaid credit card bills can eventually result in wage garnishment.

But the key word there is eventually. A lot has to happen between your first unpaid bill and your wages getting garnished. First, the bank that issued the credit card will try to get the money from you. If that doesn’t work, the bank will sell the debt to a collector. The collector will hound you for the money, but if they can’t get the cash, they’ll sue you for it. If the collector wins, the judge can order your wages to be garnished.

All this takes months or even years to accomplish – that’s a lot of time during which you could be taking action to prevent a garnishment from happening.

Nerd note: At the time this article was written there were four states that only allow wage garnishments for child support and tax obligations. If you live in Pennsylvania, North Carolina, South Carolina or Texas, your wages can’t be garnished to pay a creditor.

Don’t let garnishment happen to you

If you were unable to pay a credit card bill in the past, don’t assume that a wage garnishment is in your future. There are a lot of steps you can take to prevent this fate.

If your debt hasn’t yet been sold to a collector, you should try to work out a payment plan with your bank. Stay in contact with them as your financial situation evolves – the worst thing you can do is ignore the problem.

For debts that have been sent to a collector, the same advice holds. Answer the collector’s calls and try to agree on a payment plan. This might also be a good time to consider credit counseling. If your debt is out of control and you can’t manage it on your own, a reputable credit counseling agency can get you back on track.

If a debt collector has already sued you for the money you owe, it’s time to hire a lawyer. Again, don’t ignore the lawsuit. If you don’t respond, the collector has a better chance of winning — this means it’s likely your wages will be garnished.

In short, the best thing you can do if you’ve failed to pay a creditor is face the music and work out a plan with whoever owns the debt. It might not be pleasant, but it could mean avoiding an expensive and embarrassing wage garnishment.