When Brian and Lindsey Baldwin moved from Hawaii to Milwaukee in 2012, they paradoxically found themselves facing a much higher cost of living.

In Hawaii, the couple’s expenses were minimal. They lived in a tiny studio apartment. Their car was supplied by Lindsey’s employer, which also covered her cellphone and internet.

Lindsey was a wilderness therapy clinician. Clients in the residential program “came for three months and learned about organic gardening, yoga, mind-body-emotion connection … it was a very cool job,” Lindsey says. But it was also extremely demanding, and she didn’t want to do it when she became a parent.

Brian freelanced in web design and geographic interface systems. But career opportunities matching his expertise in geography and crime analysis were limited in Hawaii, so they moved to Milwaukee.

There, Brian worked three jobs — as a crime analyst, teaching at a local college and conducting disaster-preparedness workshops across the country. Lindsey worked part-time in a therapy practice. They thought the $50,000 they had saved would be a house down payment but quickly reconsidered. Yes, they had savings — but they owed $130,000 in student loans. In addition, their mainland salaries were a lot lower, dropping their annual income from $130,000 to $80,000.

They hopscotched across the country, while both acquiring and shedding debt — graduate school in New Orleans, then jobs in Hawaii, Wisconsin and California.

In less than four years, they were debt-free. The Baldwins now live with their son, 5, and daughter, 3, north of Boston, within driving distance of one set of grandparents.

Lindsey and Brian recently connected with NerdWallet to share their story, which may inspire your own journey to paying off debt.

What was your debt when you started?

Brian: We owed $130,000, for both graduate and undergraduate loans.

What triggered your decision to ditch debt?

Brian: [After looking at houses], when we sat down and looked on paper, we had this realization of, “OK, we need to tackle this. It’s just going to keep snowballing in the wrong direction. Let’s use the bulk of [their $50,000 savings] to pay off one or two of these loans, and then we’ll start throwing as much money as we can at the rest of them.” That was the start. [They held about $5,000 back as an emergency fund.]

What steps did you take?

Lindsey: We went on a budget. When we were in Hawaii, we never budgeted. The biggest lesson was learning to say no. We stuck to our budget pretty strictly for those four years.

Brian: We stopped buying clothes and eating out. … We built spreadsheets that broke down loans and listed what the payments were. We began to pay off the smallest loans. One of the larger principals was a 9% interest rate graduate PLUS loan, where the minimum payment was $350 and that was literally just basically interest. We refinanced through SoFi… rather than make payments that felt fruitless … Lindsey: … and saved a ton of money!

Lindsey: Brian biked to work, and he had his bike stolen and then he took the bus to work. For his birthday, his parents, my parents and work colleagues pitched in to help buy him a new bike. We just had one car. We didn’t have a TV and we didn’t have cable. We had the Tracfone, where you paid for minutes ahead of time. We went extremely frugal.

While in Milwaukee, we realized that we weren’t going to get [significant] raises, so we began to apply for other jobs. When Brian’s dream job came open … it was in California. We knew it was a lateral move for salary but knew long term it would be worth it.

Brian: Lindsey would put together a budget every month, and there was no excess. The one story Lindsey always tells is when we got to California, finally, the one extravagance we had was $5 every week we’d use to go buy one doughnut and two cups of coffee on a Sunday. Another small splurge to celebrate a milestone might be getting take-out from a high-end Thai restaurant.

Lindsey: We always had one car. We sold all we could, anything we didn’t use. If we wanted things, we looked for either free on Marketplace on Facebook or Craigslist, or I would wait until there was a huge sale.

Brian: Sometimes we would feel the frustration — that it was just a never-ending treadmill. One of Lindsey’s mantras was “Debt free by 33!” — which we missed — but that had been a target. So, the slogan was altered slightly to “34, ain’t got debt no more!”

Lindsey: We talked to each other about long term. Like, “We will be able to do those things.” The final year, it was motivating to think of having enough money to go visit Hawaii again. It would be like, “Well, when we pay this off.” We also wanted to live closer to family, where there were seasons.

We did little splurges, like when we paid off a loan. We did go to Disney. We opened a [Disney] credit card to get the rewards and make it affordable. When we wanted to do something, especially for the kids, we would ask, “How can we be creative and do this?” 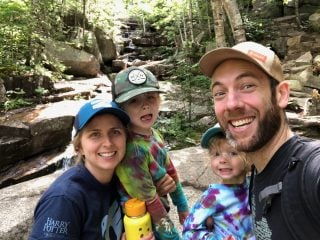 Brian: We had three different big Tupperware bins that had all of the toys and changed them every week. So each week, our son would be super excited and waiting for me to go to the garage to get the next bin. One of my favorite memories was also the “ice” activity … freezing a bunch of toys, animals, cars in a bucket of ice and then letting our son chip away at it with a wooden hammer. It provided a lot of entertainment for him and certainly didn’t cost too much. We also heavily used local parks, libraries and searched for other events and activities in the community that could provide some entertainment at no cost.

What would you do differently?

Brian: We would not have borrowed as much. I think we had literally just signed up for our next loans and I learned I was getting paid, kind of out of nowhere, this windfall of $4,000 from a nonprofit. Rather than paying it back to take out less money, we bought tickets and went backpacking in Nicaragua for three weeks. And both of us were in graduate school in New Orleans at the same time. We ate out all the time and paid for everything with student loans. I was uncomfortable borrowing so much and knew at some level it was not good.

Lindsey: I was in more denial because it was student loans. I told Brian, “But it’s good debt!”

Brian: And Lindsey won the day.

Brian: Now I have a car [a 2005 Sentra with low miles]. It’s nice to be able to reflect on what is truly needed. My son got in the back seat and said, “Oh, Papa, look!” He thought it was an enhancement feature that it had manual windows [operated with a crank] … he’d never seen those before.

Lindsey: We travel and we see family more. We still don’t really eat out. We did buy a house. I still keep us on a budget. Now we pay for preschool and kindergarten.

HOW TO TACKLE YOUR OWN DEBT

If the Baldwins’ story has inspired you to take a look at your own debt, they have some tips:

Photos courtesy of the Baldwins

Bev O'Shea writes about credit for NerdWallet. Her work has appeared in the New York Times, Washington Post, MarketWatch and elsewhere. Read more