Time is no friend to the car owner. Unlike many assets, a car’s value generally decreases over time. This is called depreciation.

While it’s an expensive part of the total cost of owning a car, you only feel the effect when you sell or trade it in. Here’s a primer on what depreciation means for you as a car owner and how you can manage it.

Depreciation begins as soon as you drive off the lot. 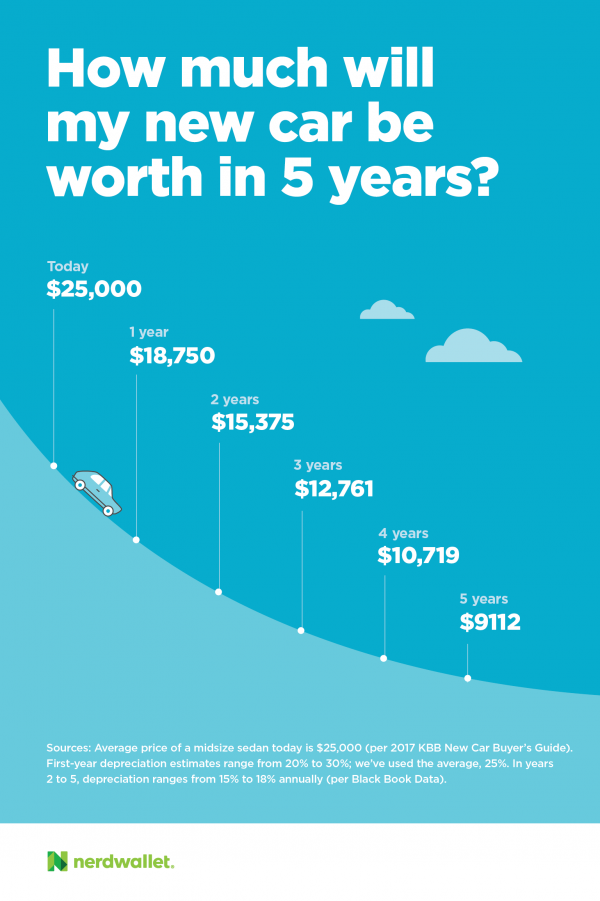 Your car’s value decreases around 20% to 30% by the end of the first year. From years two to six, depreciation ranges from 15% to 18% per year, according to recent data from Black Book, which tracks used-car pricing. As a rule of thumb, in five years, cars lose 60% or more of their initial value.

However, not all vehicles depreciate at the same rate, meaning certain makes or models hold their value better than others. And depreciation rates can also change over time.

For instance, when gas prices spike, the value of large SUVs or pickup trucks may plummet, because fewer buyers are willing to pay for a gas guzzler. Or, when returned lease vehicles flood the market, depreciation rates on those models can accelerate because there’s such a large supply of them.

In fact, leasing offers another helpful way to think about depreciation. When you lease a car, the price is based on the portion of the car’s value that you’ll use, which is essentially the depreciation.

The residual value is what the car will be worth when you’ve finished your lease term. After three years, cars generally have residual values of around 40% to 60% of their original price (though the market value may be higher).

This decline in the value of vehicles may seem dramatic, but there are strategies to reduce or manage depreciation on the cars you drive.

A brand-new car will depreciate the most because of the steep first-year drop. Buying a car that is just one year old avoids this first hit from depreciation and saves you a significant amount of money on a nearly new car. And, of course, waiting past the three-year mark could save the owner around half of the car’s original price.

MORE >> Compare the costs: Buying a new car vs. used

Savvy new-car shoppers can find exceptions to the depreciation curve. For instance, the Chevrolet Colorado lost only 7% of value in the first year in 2016, according to an analysis by iSeeCars, which aggregates used-car listings. Or used-car shoppers can look for steep discounts, like the Volvo S60, which had a 34.4% first-year depreciation drop in 2016, shaving off around $14,000 in just one year.

You can use tools like Kelley Blue Book’s five-year cost to own or Edmunds.com’s true cost to own calculators to research how much specific models typically depreciate.

You don’t have to buy a car to drive one. When you lease, you basically pay for the car’s depreciation, plus tax and interest. At the end of the lease term, you can simply turn the car in — you don’t have to worry about selling it at a loss if your vehicle’s value has unexpectedly plummeted.

But leasing may not be your preferred option if you like the stability of owning and don’t want to return a car every few years. Consider whether leasing makes sense for you, and use NerdWallet’s lease calculator to help you estimate payments and negotiate confidently.

Creative add-ons — like noisy mufflers for race enthusiasts or black aftermarket rims — may be fun, but they can reduce your car’s value. Customization shrinks the pool of prospective buyers to those with your exact tastes. Furthermore, potential buyers might worry about whether the modifications were correctly performed or if they could signal potential mechanical issues.

Your car’s color can also affect the resale value. Flashy yellows, reds and purples may show off your personality and stand out on the road, but are harder to resell. If you anticipate selling or trading in later, stick with colors that are more widely popular.

MAINTAINING YOUR CAR — AND KEEPING THE RECORDS

Regularly servicing your car and keeping all records can prevent your car from depreciating as quickly as a haphazardly maintained car of the same model and year. These two steps move you to the head of the class when it’s time to sell. They demonstrate to prospective buyers that you were a responsible owner, increasing your car’s resale value.

There are two main ways to sell your car: trading it in to a dealership, or selling it to a private buyer. If you trade in, you’ll be offered a below-market price, since dealers take on the costs of reconditioning and then reselling your car. There are steps you can take to maximize the value of your trade-in, but you’ll often get the best price by selling your car privately. If you don’t mind the extra work and time it takes to prep your car and meet with buyers, this can take a significant bite out of your depreciation hit.

Should you ever buy a new car?

Despite that 20% to 30% drop in a car’s value in the first year, there are still reasons to consider buying new.

As opposed to buying used, it’s often easier to negotiate the initial purchase price, and new car loans tend to get the best rates. Plus, to get new models out the door, automakers may provide car-buying incentives that can significantly cut the sticker price. Finally, you don’t have to worry about a new car’s condition, and new cars come with warranties, making them potentially easier and cheaper to maintain.

And ultimately, if you plan to drive your car until the wheels fall off, you’ll have used all of the car’s value, and depreciation won’t be as much of an issue.