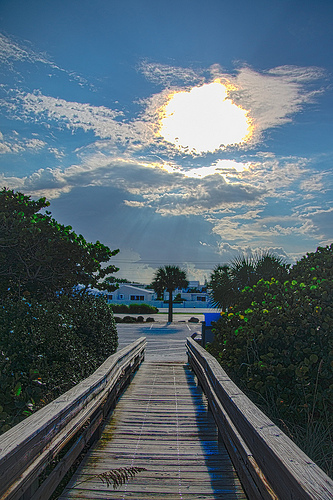 Beginning in 2005, hurricanes and the housing bust depressed homeownership rates in Florida, and they’ve stayed down ever since.

But the scores of foreclosures have kept housing prices low, so there are plenty of opportunities to become a new Florida homeowner without breaking the bank. NerdWallet has compiled a list of the best areas for homeownership in the sun-kissed state of Florida. We analyzed 179 places in the state to determine which have characteristics that are favorable to homebuyers. Our analysis answers three main questions:

2. Can you afford to live there? We looked at median household income and monthly homeowner costs to assess whether residents could live comfortably in the area. We used monthly homeowner costs to measure cost of living. Areas with high median incomes and a low cost of living scored higher. Thinking of buying a home yourself? Check out our mortgage tool to find the best rate.

Less than 20 miles from Jacksonville, this relatively new residential community, with the earliest homes built in 2009, has the third-highest population growth rate in our top 10 list at 16.2%. With amenities including two multimillion-dollar athletic centers, state-of-the-art waterparks and private function spaces, it is no surprise to see people choosing to move here. Also, the town has been designed to be incredibly family friendly. Everything is within walking distance in this tight-knit community, and the easy accessibility to five schools, shopping centers, and a public library means that most things you’ll need will be right in your neighborhood.

With the highest homeownership rate on our list at 93.8% and homeowner costs accounting for just 26.7% of monthly household income, Keystone’s numbers show it’s easy to be a homeowner in the area. Just north of Tampa’s metropolitan area, Keystone provides the getaway feeling without ever being too far away. Close by are Keystone Park and Keystone Lake, both areas of easily accessible recreation for the entire family. It’s also a great access point for higher education with 33 colleges within 50 miles of Keystone.

This fast-growing “upscale area with a small town feel” attracts people who want to leave the hustle and bustle of the city behind. Locally known as “Northwest St. Johns,” it has a homeownership rate of 90%, and homeowner costs take up 26.1% of the median monthly household income. It is located within 20 miles of Jacksonville, which provides a wide range of employment from law enforcement to education. It is also a great place for families as it has some of the highest-rated schools both in Florida and in the nation.

This community, part of the Tampa metro area, is only a 25-minute commute north of the city. It has a homeownership rate of 75.4%, and its population grew at a rate of 10.1% between 2010 and 2012. It has a 120-acre park and will see expansion of State Road 56 in the next few years, which will make commutes easier. Wesley Chapel also has its own chamber of commerce and center for the arts. And if it’s a place of leisure you’re seeking, look no further. Wesley Chapel is home to Saddlebrook Resort, which provides a relaxing getaway without having to leave your own community.

The unincorporated area within Santa Rosa County is one of west Florida’s fastest growing areas, according to data crunched by NerdWallet. Highly rated schools, recreation areas, law enforcement, and its close proximity to Pensacola make Pace a highly desirable place to live. Though many commute to the bigger cities for work, employment can be found locally through Wal-Mart Super-Center, Home Depot, Office Depot, Publix, Lowes, Sears, Target and many other local businesses. It is home to the “picturesque community” of Stonebrook Golf and Country Club, which offers a public 18-hole course. It is also home to many military personnel and civilian employees from NAS Whiting Field and NAS Pensacola. The airfields in Pensacola are considered the “Cradle of Naval Aviation” and are home to the famous Blue Angels naval pilots.

With a population of 35,765 in the 2012 census, Valrico grew 3.3% between 2010 and 2012 and has a high ownership rate of 86%. It is located less than 20 minutes east of Tampa right off FL 60-E, which means easy access to the amenities of the city. Its schools scored highly on standardized tests and earned a 7 out of 10 ranking from GreatSchools.org.

Cooper City has a high ownership rate of 88%, and its population grew 3.2% between 2010 and 2012. It has 22 neighborhood parks, a community center, a pool and tennis center, and tennis pro shop. It is also home to the Optimist Club, which offers eight sports leagues for members of the community. The city also has a comprehensive plan for the expansion of the city and population. It is in close proximity to both Ft. Lauderdale and Hollywood, which offer activities for the entire family. Class I crimes (homicide, robbery, assault, larceny, etc.) are lower in Cooper City than in the surrounding cities of Davie, Pembroke Pines or Plantation. It also prides itself in hurricane and flood disaster preparedness.

Just south of Jacksonville, Fleming Island is not actually an island but a wetland that has been developed into several golf courses and suburbs. It has a population of 28,493 with a homeownership rate of 81.3%. It prides itself in having a great school system, and its properties are valued higher than the state and national average. Its location offers short commutes to Jacksonville, which provides both higher education opportunities and job opportunities.

Oviedo is located in Seminole County, just north of Orlando. With a population of 32,894, the homeownership rate is 81%. Besides commuting to the city of Orlando for work, local employers are Publix Supermarkets, A. Duda and Sons Inc., a major sod-grower, the Oviedo Marketplace shopping mall, Seminole County College, and the City of Oviedo itself. Oviedo is currently growing and expects to expand its downtown by 50 acres. Also, its recently opened ER room has seen so much traffic that it is looking to expand, which could mean better health care closer to home. It is a tight-knit community with 12 community organizations, three fire stations, sports facilities and many parks.

Located on Florida’s southern Gulf Coast, Estero offers a beach lifestyle at an affordable price. This growing city has a homeownership rate of 86.3% and homeowner costs take up 35.5% of the median monthly household income, according to data crunched by NerdWallet. The city is home to Florida Gulf Coast University and offers loads of outdoor activities, including ocean kayaking, protected beaches, fishing and boating.

179 towns and cities with a population higher than 20,000 in Florida were included in this analysis. Communities with age restrictions and public health problems were excluded.