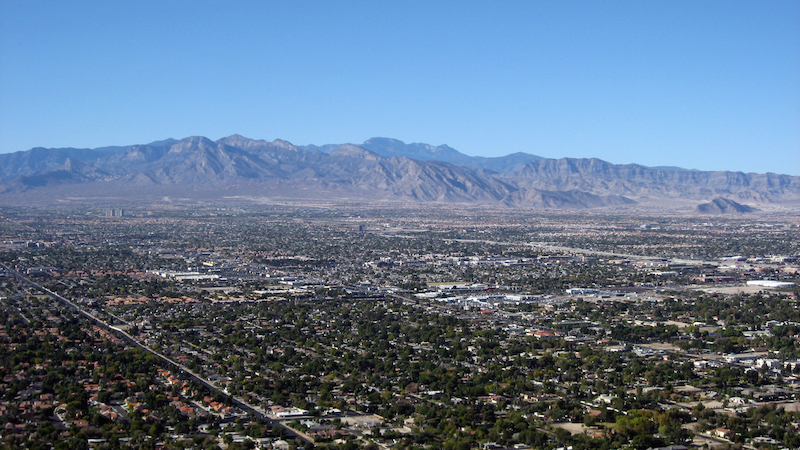 Nevada was one of the hardest-hit states during the foreclosure crisis in the late 2000s, and the housing market is still in recovery. But in 2013, home values headed up while foreclosure rates headed down, according to a report from the Lied Institute for Real Estate Studies at the University of Nevada Las Vegas. The state is also an attractive place for both residents and businesses because Nevada collects neither individual nor corporate income taxes. And for potential homebuyers, the Nevada Housing Division and the Nevada Rural Housing Authority offer homebuyer education classes, budgeting help and even financial assistance.

NerdWallet looked at the 34 Nevada communities with more than 5,000 residents to determine which are the best for homebuyers. Our analysis answers three main questions:

Silver Springs has a population just under 6,000, according to the U.S. Census Bureau, but that small number is significantly increasing. In fact, this community tops our list for population growth because of its 18.8% population increase between 2010 and 2012. While the town boasts low median selected monthly homeowner costs of $1,176 and a low median home value of $114,300, its homeowners use a significant amount of their income – 42.3%­ – to pay homeowner costs. Steeped in history, Silver Springs features Fort Churchill and Pony Express trails, which were used to ferry mail across the country.

This community of more than 15,000 residents near the Pah Rah Mountains in western Nevada provides some gorgeous views, as well as opportunities for hiking and other mountain activities. Since homeowners in Spanish Springs use only 29.1% of their household income to pay homeowner costs, it’s no surprise that 85% of homes here are owned rather than rented. The several colleges and universities in nearby Reno and Sparks, including the University of Nevada Reno, help maintain the area’s educated workforce: 22.3% of residents have at least a bachelor’s degree, which is slightly higher than the state average, according to the U.S. Census Bureau.

Spring Creek’s GreatSchools rating of 7 out of 10, which is based on standardized test scores, indicates that this rural community, located near Elko in the northeastern part of the state, is a great place to raise a family. The town’s residents earn a median monthly household income of $7,575, the highest on our list, and homeowners pay only 20.2% of that toward homeowner costs, the lowest on our list. Spring Creek’s location near the base of the Ruby Mountains also provides residents with plenty of opportunities for outdoor recreational activities, including camping, hiking at Ruby Dome and Griswold Lake, and fishing and canoeing at the 32-acre stocked private marina.

This small community of less than 7,000 is made up of the towns of Overton, Logandale and Moapa. Moapa Valley’s population grew 7.3% between 2010 and 2012, and area homeowners spend 35.2% of their median monthly household income on homeowner costs. Residents have the opportunity to spend their spare time in vastly different environments: they can experience the great outdoors at Valley of Fire State Park and Lake Mead National Recreation Area, or they can explore the wilds of Las Vegas, which is just an hour’s drive south.

The “friendliest town in Nevada,” as Winnemucca calls itself, is the county seat of Humboldt County, located in northwest Nevada on the Oregon border. Notably, the 6.8% unemployment rate in February 2014 for the county is one of the lowest in Nevada, according to the Nevada Department of Employment, Training and Rehabilitation. Winnemucca’s major industries include cattle and sheep ranching, gold and silver mining, and agriculture. The median home value in Winnemucca is $173,900, and median selected monthly homeowner costs are $1,368. Homeowner costs take up only 24.3% of homeowners’ household incomes, making Winnemucca an affordable place to live.

Enterprise is part of the Las Vegas metro area, and while proximity to Sin City could be a drawback for some potential residents, the high population growth rate doesn’t show it. The census-designated place’s population grew 13.7% between 2010 and 2012, making Enterprise the second highest area on our list for population growth. Other than gambling and shopping on the Vegas Strip, outdoor recreational activities are also accessible to residents as Lake Mead National Recreation Area and Red Rock National Conservation Area are just a short drive away. Business owners are attracted to the area because of the tax advantages, including no corporate income tax and no chain store tax.

The small community of Lemmon Valley has a population that barely breaks 5,000, according to the U.S. Census Bureau, and it is just minutes away from Reno and Sparks. The census-designated place is an affordable area to call home, since its median selected monthly homeowner costs are $1,490, and median household income tops $5,328 per month. Peavine Peak is positioned just south of Lemmon Valley, so its residents have access to hiking trails and bird watching close to home. Lake Tahoe is just an hour away for skiing, camping and other outdoor activities.

Summerlin South is an extension of the master-planned community of Summerlin. It’s a fast-growing, highly educated community where 45.8% of residents have a bachelor’s degree or higher, and poverty is low with just 3.6% of residents living below the poverty line, according to the U.S. Census Bureau. The census-designated place’s median monthly household income is $7,226, which is among the highest household incomes on our list. Summerlin South is located adjacent to Red Rock Canyon National Conservation Area, one of the top five climbing destinations in the U.S. This community also features a massive trail network that connects each of the villages in Summerlin.

This city of more than 18,000 in northeast Nevada boasts affordable homes, low taxes and city programs for kids. Plus, Elko County’s 6.5% unemployment rate is one of the lowest in the state, according to the Nevada Department of Employment, Training and Rehabilitation. Owning a home here is affordable because the median selected homeowner costs take up just 25.1% of median monthly household income. The economy is supported by diverse industries including hard rock mining, manufacturing, cattle ranching, tourism and gaming. In addition to Elko’s 120 acres of public parks, the area offers a myriad of recreational activities including hiking, camping, climbing, horseback riding and skiing.

A whopping 87.9% of residents own their homes in Cold Springs, which puts the area near the top of our list in the homeownership rate category. This census-designated place sits on the California border and has low median selected monthly homeowner costs of just $1,596 per month. Cold Springs is just outside of Reno, so Reno’s casinos, jobs, universities and colleges are easy to access, and Lake Tahoe is a just an hour’s drive south. Back in the days of the Old West, Cold Springs was a famous stop on the Pony Express.

Only places with populations greater than 5,000 were included.