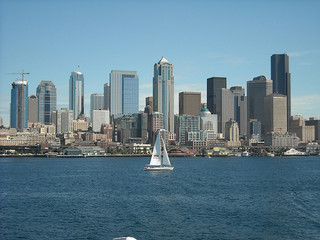 Washington is a great state for job seekers – its unemployment rate has dropped from 7.5 percent in January to 7.0 percent in August. As many young professionals seek jobs, NerdWallet crunched the numbers to find the best places for job seekers in Washington.

NerdWallet analyzed the best cities for job seekers by asking the following questions:

The Best Places in Washington for Job Seekers

Located 17 miles east of Seattle, Issaquah is located on the south banks of Lake Sammamish in King County. Issaquah saw a large population growth of 23.6 percent between 2009 and 2012, and households earn a median income of $87,038. Additionally, the city has a very low unemployment rate of 3.5 percent. The top employers in Issaquah include Costco, Microsoft, Issaquah School District and Spacelabs Healthcare. Costco Wholesale’s corporate offices are also located in Issaquah. The city is focused on going green, with plenty of information and incentives for businesses to adopt green initiatives.

The Strawberry City is located in Snohomish County, six miles north of Everett. Marysville’s population has grown 43.5 percent from 2009 to 2012, and its unemployment rate has stayed low, at only 4.8 percent. Marysville’s top employers include Marysville School District, Zodiac Aerospace and Fred Meyer. In 2001, 2003 and 2005, the Greater Marysville Tulalip Chamber of Commerce was awarded the Community Service Award in the “Projects to Mobilize People into Action” category by the Association of Washington Business. The chamber has worked consistently to bring communities together, share resources and focus on economic development in the region. Marysville’s local Columbia College offers military members a special start-and-stop degree flexibility to help them work around their schedule and obtain the education they need.

Sammamish is located on the east bank of Lake Sammamish, approximately 20 miles east of Seattle. Sammamish saw a 13.7 percent population growth between 2009 and 2012, while its median household income is the highest on our list at $135,432. Sammamish also boasts a low unemployment rate of 4.2 percent. Sammamish’s city government is focused on becoming an environmentally-friendly community by focusing on five main goals, including helping local businesses be more sustainable. Sammamish’s top employers includes the Issaquah School District and the Lake Washington School District.

Renton, the home of the Seahawks, is located on the southeastern shore of Lake Washington, approximately 11 miles southeast of Seattle. Renton saw a 35.0 percent population growth between 2009 and 2012 while maintaining a low unemployment rate of 4.4 percent. Top employers in Renton include The Boeing Company, PACCAR and Valley Medical Center. Renton’s government provides a good guide to many local resources for job seekers. Renton Technical College has a worker-retraining program to help job seekers pick up new skills while still receiving unemployment benefits.

Located 15 miles west of Seattle, Redmond is a hub of technology and home to the headquarters of Microsoft and Nintendo of America. Redmond’s median household income is $92,851, the second highest on our list. Additionally, Redmond’s unemployment rate is a low 3.9 percent. The top employers in Redmond include Microsoft, AT&T and Volt Technical Services. The city government supports many programs to help job seekers from all walks of life, including the AtWork! program to help those with disablities find careers and the HopeLink program to help families and adults obtain further education.

Kent is located in King County, 18 miles south of Seattle and 18 miles north of Tacoma. Kent had a population growth of 30.5 percent between 2009 and 2012, and the city’s unemployment rate is only 5.0 percent. The top employers in Kent are the Boeing Company, Kent School District and REI. Additionally, REI and Oberto Sausage are both headquartered in Kent. The local Green River Community College helps students and community members find jobs with online resources such as its Job Search Web Center.

Located on the eastern shores of Lake Washington, Kirkland is situated eleven miles northeast of Seattle and six miles north of Bellevue. Kirkland’s households earn a median income of $88,756, and its unemployment rate is 4.3 percent. The city’s top employers are Evergreen Healthcare, Lake Washington School District and Google. Young people can get help finding job opportunities with the [email protected] initiative from the Workforce Development Council of Seattle-King County.

Bothell is a city located 12 miles north of Bellevue and 15 miles northeast of Seattle. Bothell’s households earn a median income of $70,935 while the city’s unemployment rate is 4.7 percent. Principal employers in Bothell are Northshore School District, AT&T and Philips Ultrasound, and other major employers include technology companies such as SonoSite and Panasonic Avionics. Bothell’s city government teamed up with the Washington State Department of Commerce and the Washington Biotechnology & Biomedical Association to create a Biomedical Manufacturing Innovation Partnership Zone that fosters the growth of the biomedical device industry. The University of Washington Bothell has The Entrepreneur Center that provides local businesses with resources such as market research, business models and networking to help them succeed and expand.

43 Washington communities designated as places by the U.S. Census were included in this analysis. Only places with a population greater than 25,000 were considered.