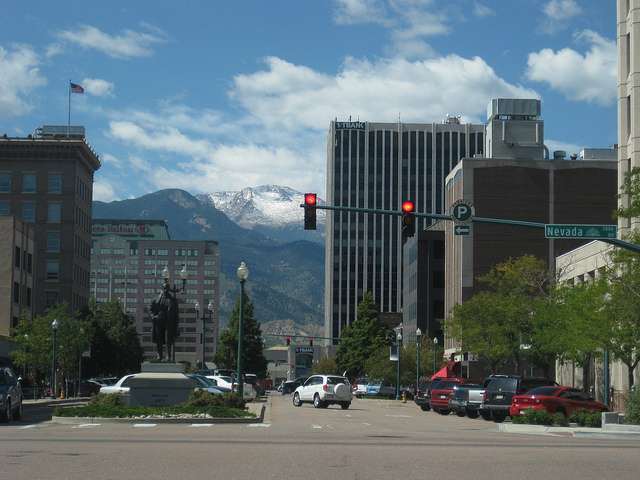 Over the past decade, Colorado has been practically synonymous with growth as more people and businesses migrate to the Centennial State. The state gained 70,500 jobs across all industries from May 2013 to May 2014, according to the Colorado Department of Labor and Employment.

New residents are flocking to the state to take those jobs: Colorado was the fourth-fastest growing state from 2012 to 2013, according to recently released U.S. Census Bureau data. The growth has made Colorado’s economy one of the strongest in the nation.

The state had the sixth-fastest growing GDP, or real gross domestic product, in the U.S. in 2013, according to new numbers from the Bureau of Economic Analysis. Real estate and scientific and technical services were the largest growth industries in the state’s economy last year, the report found.

NerdWallet crunched the numbers to find Colorado cities with more than 20,000 residents demonstrating growth in jobs, income and population. Here’s what the top 10 cities had in common:

Our analysis examines the following growth metrics from census data:

2. Employment growth. We evaluated growth in the percentage of employed residents from 2009 to 2012 relative to the statewide employment growth over the same period.

Cities on the Rise in Colorado

The city, located south of Colorado Springs, saw a 17.2% increase in median income, the state’s biggest rise, for full-time workers from 2009 to 2012. This increase is likely because of the construction boom in the area: new restaurants and retail centers have popped up to serve local residents who previously had to drive to Colorado Springs for shopping and recreation. Economic development officials expect the growth to continue and hope to attract higher-end retail stores to the area, which has a customer base of nearly 100,000. More growth is expected at Fort Carson, a nearby Army base, which over the next five years will add 1,800 soldiers to become home to nearly 25,000 soldiers and their families.

Just north of Fountain on Interstate 25, Security-Widefield, a census-designated place, is experiencing the same rapid growth that put Fountain at the top of our list. Along with an income increase, Security-Widefield’s working-age population grew 16.1% to 41,221 in 2012. Most residents work in management, business or sales, and many make the 10-mile drive north to jobs in Colorado Springs, according to census data. New residents are moving to the Security-Widefield area for its surplus of newly constructed homes, low cost of living and proximity to outdoor playgrounds such as Pikes Peak and Garden of the Gods. Growth in Security-Widefield helped make El Paso County the most populous in the state.

Income in this southwestern Denver suburb increased 15.8% from 2009 to 2012, earning this census-designated place a top spot on our list. The median income for full-time workers in Columbine was $62,398 in 2012, making it one of the top- earning places in the state. Columbine is surrounded by the prosperous suburbs of Littleton and Centennial, and residents commute to jobs in Denver and nearby areas. Residents work in management, business, science and arts, according to census data. Columbine’s working-age population grew modestly during this period, topping out at 19,442 residents at the end of 2012.

On the opposite side of the Denver metro area, Northglenn experienced similarly strong income and population growth from 2009 to 2012, according to census data crunched by NerdWallet. At least 34 new storefronts have opened in the past year in the city that is home to 871 businesses, according to economic development officials. Many businesses are choosing Northglenn because of the incentives from the Northglenn Urban Renewal Authority, which offers opportunities for businesses to move into abandoned or blighted property, such as old shopping centers or abandoned malls. In one case, Wal-Mart recently purchased a formerly blighted shopping center to build a new neighborhood market, a store about a third of the size of the retailer’s traditional supercenters.

Denver, the state’s capital and largest city, is booming. Income for full-time, nonseasonal workers increased 14.3% from 2009 to 2012, and the population grew to 497,431 working-age adults. The Denver metro area is home to about 2.7 million people, but planners estimate that the region will grow to nearly 4 million residents by 2030, and gain 800,000 jobs. With its close connection to the outdoors, entrepreneurial spirit and moderate cost of living, Denver is a destination for young urbanites and seasoned professionals. The city is also the hub for the state’s marijuana industry, which has created at least 1,000 new jobs, and generated more than $2 million in tax revenue since recreational marijuana use became legal this year.

Wheat Ridge, which is slightly west of downtown Denver, saw the state’s second-fastest income increase, up 17% to $45,025, from 2009 to 2012. In addition to jobs in Denver, the largest employers in Wheat Ridge are Exempla Healthcare, Rocky Mountain Bottle Co. and UTI Star Guide Corp., a manufacturer of wire and tubing for medical devices and electronics. Interestingly, almost half of residents in Wheat Ridge were born outside Colorado, according to census data. The city has more than 20 parks and a greenbelt trail system.

Castle Rock, which straddles the stretch of Interstate 25 south of Denver and north of Colorado Springs, saw its working-age population increase 13.4% to reach 35,953 residents in 2012. The county seat of Douglas County is named for the castle-shaped rock formation that looms over the town. Douglas County was the nation’s fastest-growing county from 2000 to 2010, and although the growth has slowed, Castle Rock still attracts hundreds of new residents each year. Planners estimate Castle Rock will be home to 100,000 residents by 2060, and the town is doing all it can to encourage growth. The Castle Rock Chamber of Commerce sends welcome bags to every new resident and business to make them feel at home.

Littleton is just five miles east of Columbine and another thriving metro Denver suburb. Income for full-time workers grew 12.4% to $50,431 from 2009 to 2012. The city, which focuses on sustainable growth, is working to recruit businesses, so residents can live and work in town. Littleton promotes conservation by implementing environmental initiatives such as tree-planting campaigns, hazardous waste recycling and Christmas tree recycling services. The city also loves to celebrate with its year-round slate of festivals, races and community walks.

Just like the other Denver metro areas on our list, Aurora saw gains in population and median income, according to census data crunched by NerdWallet. Aurora, on the east side of the Denver metro area, is the state’s third-largest city, with 251,072 working-age residents in 2012. City officials reported that economic development efforts in Aurora since 2001 have created and sustained 21,225 jobs. Aurora is home to offices of aerospace companies such as the Boeing Co., Lockheed Martin, Northrop Grumman and Raytheon. Health care and bioscience are also important industries in Aurora. Construction is still ongoing at the Anschutz Medical Campus and Fitzsimons Life Science District, home to the University of Colorado Hospital, Children’s Hospital Colorado and the future site of a Department of Veterans Affairs hospital.

Fort Collins, about an hour north of Denver, is a vibrant college town and home to Colorado State University. One of the largest cities in the state, the working-age population in Fort Collins increased 7% to 120,197 from 2009 to 2012 . The city is committed to helping small businesses grow by working with Colorado State University’s Institute for Entrepreneurship to support early-stage startups and encourage students to start businesses in Fort Collins. Also, the Rocky Mountain Innosphere, a business incubator based in Fort Collins, specifically supports science and technology startups pursuing innovations in clean, renewable and efficient products.

To view the full ranking of all 31 cities evaluated for this study and to download the data, click here.

2. Employment growth from 2009 to 2012 made up 33.3% of the total score. We evaluated growth in the percentage of employed residents from 2009 to 2012 relative to the statewide employment growth over the same period. Data for the percent of employed residents comes from the 2009 and 2012 U.S. Census American Community Survey 3-year estimates for all places in the state, Table CP 03.

We evaluated the 31 cities, towns and census-designated places in Colorado with more than 20,000 residents for this study.