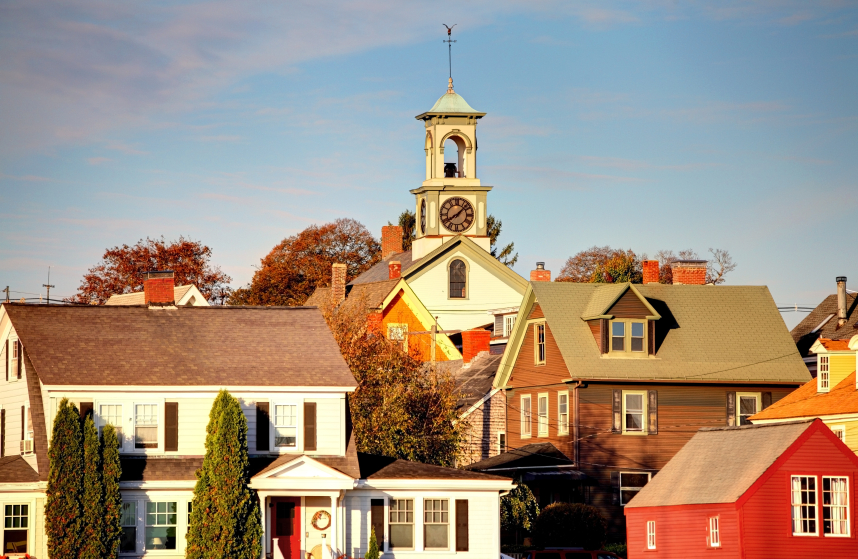 Like its neighbors in New England, New Hampshire is a beautiful state with nearly limitless recreational and cultural opportunities. Whether it’s exploring downtown Portsmouth in the summer, hiking through forests of vibrant orange and red leaves in the fall or hitting the slopes at Bretton Woods in the winter, New Hampshire provides an ideal setting for active young families.

In New Hampshire, the median home value is about 3.70 years of a median family’s income — that means a family would have to save 3.70 years of their entire income to outright purchase a median home. In the region, only Maine’s housing values are lower, with 3.60 years of income needed to purchase a home. New Hampshire stacks up particularly well against Massachusetts, its neighbor to the south, where a median family would have to save nearly five years of income to purchase a home.

When NerdWallet crunched the data to find the best cities for young families in New Hampshire, we found an excellent place for families looking to settle in the northeast corner of the country. The affordable state is home to good schools and it isn’t far to drive to Boston, the de facto capital of New England.

Affordable and amenity laden. The average median home price in the top 10 cities is $235,140, which is below the statewide average of $241,964. Residents can find plenty of value for their housing dollar, including excellent schools and some of the more family-oriented communities in the state.

Quality schools. Three of the four places with the highest-ranked school systems in the state (Exeter, Plymouth, Portsmouth and Newmarket) are in the top 10, so families have their choice of several top-notch options. Newmarket is just outside the top 10, ranking No. 12.

Families abound. Cities in the top 10 have an average of 20.7% of households with at least one child under age 18, including the cities with the four-highest marks in the state (Henniker, Plymouth, Exeter and Londonderry).

Prosperity and growth. Looking at current and past family incomes, we calculated the income of residents, as well as the projected long-term growth of each city.

Quality of education. We looked at ratings at GreatSchools.org to find the best schools.

Family friendliness. This year, we added a new component to our methodology: the percentage of families with school-age children and the poverty rate for young children. This measure helps determine if an area is not only affordable for families, but if it is also a healthy one for children.

NerdWallet crunched the data for 25 places in New Hampshire — cities, towns and census-designated places. Only places with over 2,000 residents were analyzed. To see the full data set, click here.

Henniker may be a town of only 2,019, but it has enough options to keep a family’s social calendar filled year-round. Henniker is home to New England College, Pat’s Peak ski resort and a summer concert series at Henniker Community Park’s gazebo. Young families are attracted to Henniker, as 40.5% of the town’s residents are families with at least one child under 18, which is by far the highest mark in the state. The town has been exceptionally successful in recent years, with median family income growing 172% since 1999, the third-highest level in the state.

With an idyllic setting in the White Mountains area of the state, Plymouth offers families a combination of affordability and excellent schools. Median home values in Plymouth of $229,600 are below the statewide median of $232,400 and the town earned an average GreatSchools score of 8 out of 10, which tied for the second-highest mark in the state. Active families will love canoeing on the Baker River or hiking along the New Hampshire Heritage trail, which runs through Plymouth and extends from the Massachusetts border all the way to Canada.

Exeter is the home to Phillips Exeter Academy, which is often ranked as the top preparatory school in the country. Yet even those who eschew the school’s $47,000 tuition (for boarding students) can find the best public schools in the state, according to a composite of rankings from GreatSchools.org. Exeter also benefits from excellent recent economic success, as family median incomes since 1999 have grown 105%, one of the best performances in the state. Exeter is full of small-town New England charm — one of the most popular annual events is the Exeter Brass Band concert series, which is held every Monday in the summer at the downtown bandstand.

Littleton is one of the most affordable places in the state, with median home values of $161,100, and it is one of the most community-oriented places in the state. Local residents and business owners have played an important role with the Littleton River District Commission, a group dedicated to revitalizing the town’s Ammonoosuc River waterfront. A number of local restaurants dot Main Street, perfect for grabbing a bite to eat after hitting the slopes on Mt. Eustis Ski Hill, Littleton’s volunteer-run ski mountain.

With a population of just under 11,000, this southern New Hampshire community offers young families an array of amenities. Londonderry has the second-highest percentage, 29.5%, of households with children younger than 18 in the state, and residents can expect to pay the lowest in the top 10, or 24.87% of their median monthly income on select homeowner costs. Londonderry residents can also tap into the job market and culture in Boston, which is only 44 miles south.

Jaffrey is the most affordable place in the top 10, with a median home value of $160,000, but don’t be misled by the price: Residents here will find good schools (with a GreatSchools rating of 7 out of 10) and excellent recent economic growth (median family income growth of 104.15% since 1999). Active families will love exploring the hiking trails on Mount Monadnock, a favorite destination of Henry David Thoreau.

Of the three Merrimack towns in the top 10 (Henniker, Hooksett and Concord), Hooksett is the most affordable, with median home values of $200,000, and it also has the best GreatSchools rating among its county peers. Hooksett is adjacent to Bear Brook State Park, which offers 40 miles of hiking and mountain-biking trails through beautiful New England forest.

New Hampshire’s capital is the largest city in the top 10 and it offers an excellent balance of affordability and economic opportunity. Concord’s median home value of $218,300 is below the state median of $232,400, and median family incomes have grown 75% since 1999, topping the statewide median of 64%. Concord also has a bustling arts scene, featuring the Granite State Symphony Orchestra and the SNOB (Somewhat North of Boston) Film Festival.

Portsmouth, right across the Great Bay from Durham and on the Atlantic coast of the state, is a city with many unique qualities that make it such a great place for young families. Its walkable downtown is full of boutiques, brewpubs and ice cream shops (try the New Hampshire Pure Maple Walnut at Annabelle’s), and the public schools have an average rank of 8 out of 10, the second-highest mark in the state. Unsurprisingly, families have taken notice, and the number of family households since 2000 has grown 26.12%.

On the map below, click on an icon to see more details about each place on the top 10 list.

Home affordability. Home affordability, 30% of the total score, was calculated by averaging index scores for median home value and median selected monthly owner costs. The lower the costs, the higher the score.

Educational quality. Using data from GreatSchools, every place was assigned a ranking from 1 to 10 for the quality of schools. Education is 20% of the total score.