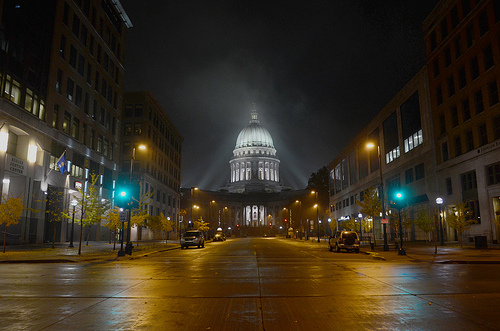 It’s been a tough few years for Wisconsin job seekers. The state continues to rank in the bottom half of states for job creation, with a 1% growth rate in civilian jobs from October 2012 to October 2013, according to employment data from the U.S. Department of Labor.

But there’s help available for job-seeking Wisconsinites. There are economic development public-private partnerships or job-training centers in almost every city, plus online resources provided by state agencies. The state’s network of workforce development centers places a heavy emphasis on training for manufacturing, construction trades and health care jobs, which are three of the state’s largest industries. NerdWallet crunched the numbers to find the best places for job seekers in Wisconsin.

This community is located in Wisconsin’s picturesque lake country, about halfway between the larger cities of Milwaukee and Madison. The working-age population grew by 9.3% from 2009 to 2012, which was the fastest growth rate for any community in the state.  And at $72,201 per year, it has one of the highest median household incomes in the state, according to data crunched by NerdWallet. That’s due in part to jobs at the Target distribution center and jobs created by retail and industrial companies moving into the new mixed-use development Pabst Farms, which opened in 2011. Oconomowoc residents are smart: more than 25% have bachelor’s degrees, compared with just 17% of their Wisconsin peers. Residents put those degrees to use at Oconomowoc Memorial Hospital and Rogers Memorial Hospital, two of the city’s largest employers. Job seekers in Oconomowoc can turn to the Workforce Development Center of Waukesha County, a public-private partnership that provides free or low-cost worker training and services such as resume development, computer classes and career counseling. Located in nearby Pewaukee, it’s part of a network of worker-training centers spread across the state.

Our second pick has the second-fastest-growing working-age population in the state and one of the lowest unemployment rates at just 4.7%. This south Madison suburb’s largest employer is Promega, an international biotechnology firm that manufactures lab instruments for the life sciences. Promega’s Fitchburg campus is also home to the BioPharmaceutical Technology Center, which partners with the biotechnology certificate program at nearby Madison Area Technical College and offers workshops for scientists, the general public and K-12 students in the community. Other large Fitchburg employers include ThermoFisher Scientific, Placon and Wolf Appliances. Job seekers can also get help at the nearby Dane County Job Center where career counselors offer free help with resume building, mock interviews, civil service tests and job fairs.

This expanding north Madison suburb has lower monthly homeowner costs than Fitchburg, which is also a Madison suburb. The top employer, the insurance company QBE North America, employs more than 900 people in the community. The city is also home to the Sun Prairie Business Park and a large retail space anchored by Costco and Target. Job seekers here can lean on the Dane County Job Center for help with interviews, resumes and civil service tests for jobs with the state government in Madison.  Job seekers also can enroll in classes and continuing education programs at the Sun Prairie campus of Madison Area Technical College.

Job seekers in this northeast Wisconsin city have ample opportunities in manufacturing. Workers can post resumes and create personal-skills profiles through the NEW Manufacturing Alliance, a partnership between northeast Wisconsin schools, workforce development boards, chambers of commerce and state organizations to train workers for careers in precision manufacturing. The median household income in Menasha is lower than our other top picks ($47,131), but so are the monthly homeowner costs ($1,188). Job seekers can also get help and connect with employers through the Fox Cities Workforce Development Center.

Located next to Green Bay, Howard has just over 17,500 residents and the working-age population grew by 6.7% between 2009 and 2012, according to NerdWallet’s analysis. Howard is home to the corporate offices of UnitedHealth Care, N-Sight Communication and the regional corporate office of WIPFLI CPA & Consulting. Job seekers here can tap the resources of nearby Green Bay, including the adult bachelor’s degree program at the University of Wisconsin-Green Bay and Northeast Wisconsin Technical College’s online career center. Residents can also take a break and make the pilgrimage to Lambeau Field to watch the Green Bay Packers play football.

This northern Milwaukee suburb is home to the Harley Davidson powertrain operations center and the corporate offices for the Kohl’s department store chain. The median household income and monthly homeowner expenses are among the highest of our cities, but jobseekers can get help earning a top salary from the career development specialists at Waukesha County Technical College in nearby Pewaukee, where students can access career counseling, skills workshops and mock interviews. Residents can also seek help from the Workforce Development Center, also in Pewaukee.

This town of more than 26,000 residents is located in the center of the state and is home to University of Wisconsin-Stevens Point and a satellite campus of Mid-State Technical College. Delta Dental of Wisconsin, Noel Group, Sentry Insurance and Travel Guard all have corporate headquarters in town, and job seekers can get help from the North Central Wisconsin Workforce Development Board, a public-private partnership that helps job seekers prepare for and find work both in Stevens Point and in the surrounding area. The median household income is the lowest of our top 10 cities ($38,934), but so are the monthly homeowner costs ($1,124).

Like Howard, De Pere is contiguous to Green Bay, but on the south end of the city. The median household income in De Pere is slightly lower than in Howard ($56,368 versus $61,327), but so are the monthly homeowner costs ($1,440 versus $1,508). Job seekers in De Pere have a lot of opportunities for help. New North is a Green Bay-area nonprofit that aims to attract businesses to northern Wisconsin by training workers in manufacturing, sales, management and health care professions. Green Bay’s campus of the Wisconsin Job Center also offers lots of online resources for people looking for jobs.

Wisconsin’s capital is home to the state government and the main campus of the University of Wisconsin, a major research university. It’s also the largest of NerdWallet’s top 10 Wisconsin cities for job seekers with 234,586 people living in the city in 2012. Additionally, it boasts the lowest unemployment rate of NerdWallet’s top 10 Wisconsin cities for job seekers at just 4.1%. Those looking for work in Madison can get help from training programs in health care administration and construction trades from the Workforce Development Board of South Central Wisconsin or through the board’s online resources. Madison Area Technical College also offers apprenticeship programs in fields ranging from cosmetology to ironworking, along with traditional associate degree programs. The University of Wisconsin’s adult education program has a wealth of online resources for local job seekers and offers support groups for unemployed adults looking for work. Advisors from the university routinely schedule outreach events at public libraries, community centers and festivals to offer one-on-one career counseling.