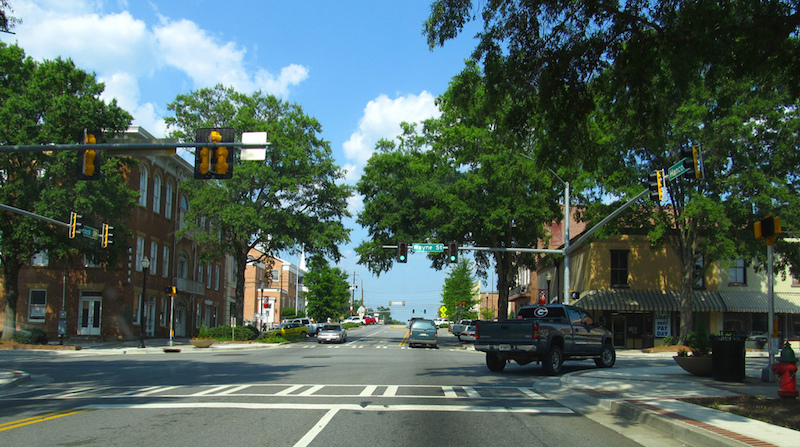 With its stunning parks, cosmopolitan cities, and beautiful coastline, the Peach State is an amazing place to live. It’s no wonder that thousands flock to the state each year in search of new opportunity. Nationally, home values went up 10% between this year and last year. Georgia’s real estate agents are interpreting that trend as a signal to potential homebuyers to take a second look.

“It’s a good time for folks to reassess their situation,” wrote the Georgia Association of Realtors in a February press release. “Getting a fresh comparative market analysis might be a good idea.”

With that in mind, NerdWallet analyzed the 68 cities in Georgia with more than 15,000 residents to determine which have characteristics most favorable to homebuyers. Our analysis answers three main questions:

Topping our list of best places for homeownership is the city of Pooler. Pooler is experiencing the most rapid population growth of the cities included in our study with a 13.4% increase between 2010-2012. Monthly homeownership costs here take up just 26.6% of the median monthly household income. Located just inland from the coastal jewel of Savannah, Pooler has a rich historical past, dating back to the Civil War. General William Sherman chose to camp here before launching the siege of Savannah near the end of the war. The city is home to The Fun Zone Amusement & Sports Park, which features a water park, go-karts, mini golf and more. The Mighty 8th Air Force Museum, a World War II museum featuring vintage aircraft and war memorabilia, is just one of several museums in Pooler.

Evans sits in the northeastern part of Georgia, along the South Carolina state line, and has the second highest homeownership rate on our top 10 list at 85.9%.  Made up of just 25.27 square miles, Evans is a small town with big opportunities. Augusta is just 10 miles away and features employment opportunities like U.S. Army center Fort Gordon and Georgia Regents University. Water lovers enjoy Lake Strom Thurmond, which encompasses 70,000 acres of water in the Savannah River Basin less than 20 miles away. Evans is also centrally located between two leading Southern cosmopolitan areas, just a two-hour drive from Atlanta and two hours and forty five minutes to Charleston, S.C.

Very close to Atlanta and the Chattahoochee River, with median monthly home costs of just $1,576, Sugar Hill is a slightly more affordable option than many other Atlanta suburbs. The median home value is $172,800, and 83.1% of the homes are owned rather than rented. The city is home to the 67-acre Gary Pirkle Park, which features five multi-purpose fields, 1.7 miles of paved, lighted walking trails, and a community garden. Golf lovers will enjoy the picturesque Sugar Hill Golf Club at the foothills of the North Georgia Mountains.

Woodstock ranks fourth on our list of best places for homeownership in Georgia. Located in the northwest part of the state, Woodstock is considered part of the greater metropolitan area of Atlanta. The city features a quaint downtown shopping area that includes 25 locally owned shops, antique stores and art galleries.  Woodstock is also home to the historic Dixie Speedway, a 3/8-mile clay oval track that hosts stock car racing Saturday nights from May through October. The city has a homeownership rate of 71.5%, with residents spending a monthly average of 27.4% of their income on homeowner costs. Woodstock is also near Lake Allatoona and Red Top Mountain State Park, big perks for outdoor enthusiasts.

Mableton is just a 15-minute drive west from the sprawling metropolis of Atlanta. The city features a homeownership rate of 74.9%, and homeowners here spend 31.5% of their monthly income on homeowner costs. The city features a plethora of parks that offer hiking trails, baseball fields, tennis courts and even an amphitheater. Mableton features the lowest median home value of our top 10 at just $159,500. The community of Mableton includes more than 30,000 residents and 20 square miles. Mableton is also popular for its tax rate, which is lower than neighboring Fulton County and Atlanta, and its proximity to I-285.

Less than 30 miles from the big city, Johns Creek is home to Atlanta’s only part-time, fully professional orchestra, the Johns Creek Symphony Orchestra. There are also six golf courses including the prestigious Atlanta Athletic Club.  If you’re interested in river life, the nearby Chattahoochee River offers boating and fishing. With a median home value of $336,000, homeowners who live here spend an median of 25% of their household income on homeowner costs.

Snellville features the lowest media monthly homeowner costs in our top 10 at $1,471 per month and the highest homeownership rate of any place on our top 10 list at 87.4%. A northeastern suburb of Atlanta, Snellville offers the lure of the city and the charms of the countryside. Stone Mountain Park and Stone Mountain Golf Club are just 10 miles away.

Work in Atlanta, enjoy life in Milton. Just 30 miles north, homeowners in the affluent city of Milton enjoy a median monthly household income of $9,741 and spend 28.5% of their monthly income on homeowner costs.  The median home value is $462,700, the highest on our top 10 list. With the Chattahoochee River National Recreation Area just a stone’s throw away, there are many parks and outdoor activities to keep residents happy and active in the Georgia sun.

Suwanee residents are heavily invested in their city–literally. In 2007, residents voted to double their property tax and acquire an additional 230 acres of green space and also created a new vibrant town center.  A suburb of Atlanta, Suwanee homeowners spend 28.1% of their monthly income on homeowner costs, which average $2,000 per month. Suwanee public school test scores are top-notch.

Completing our top 10 is the city of Fayetteville, located just 30 minutes south of Atlanta. Surrounded by greenery, homeowners in this city spend 30.8% of their monthly income on homeowner costs, which average $1,660 per month. History buffs will appreciate that the town features the oldest surviving courthouse in Georgia. The city is also a quick 15-mile jaunt from the world’s busiest airport, Hartsfield-Jackson International Airport, which makes traveling and picking up visitors a breeze.

All 68 Georgia places with 15,000 or more residents were included in this analysis.