American Airlines is the only North American airline to offer first class on long-haul international flights as well as its transcontinental flying between major markets like New York and Los Angeles or San Francisco. American calls its first class product Flagship First.

When it comes to widebody aircraft, American Flagship First is available only on the Boeing 777-300ER aircraft that it operates on a handful of routes like Dallas-Fort Worth to Sao Paulo, Hong Kong and London Heathrow. The Airbus A321s that operate on transcontinental routes between New York JFK and Los Angeles or San Francisco also feature Flagship First.

But, first, we give you a quick rundown of domestic first class, since it is referred to as “first” on North and Central American flights.

All American and American Eagle aircraft feature first class with the exception of the CRJ-200 and ERJ-135/140/145 regional jets. First class is available on domestic flights and those around North America, the Caribbean and Central America. Domestic travelers will find this to be the standard product with larger seats providing more space to work or relax.

The seats are nothing exotic, but on some planes they feature adjustable headrests. American is far behind other airlines when it comes to having power outlets at every seat; many of its Airbus planes still do not have them, making it hard to stay productive on longer flights. Luckily, American does feature Wi-Fi on all of its mainline planes and regional jets with more than 50 seats.

Domestic first class passengers can use the priority check-in and boarding lanes, but they do not get access to any lounges before their flight (unless they are an Admirals Club member or have a relevant credit card that provides access). They can also check two bags free of charge, which come with priority tags. On regional jets, first class passengers receive a dedicated tag for carry-on bags that have to be checked at the gate so they are delivered first at the gate upon arrival.

Prior to takeoff, flight attendants are supposed to hang jackets and offer pre-departure beverages. On American, this advertised perk is very hit or miss in reality.

In-flight service includes meals on flights of over 900 miles. There are several shorter “exception” flights where meals are still served, however.

Customers can pre-select their meal 30 days before departure via the airline’s website. In addition to the standard menu choices, there is a choice of special meals like vegetarian, diabetic and kosher options. All meals must be ordered at least 24 hours before departure; otherwise, passengers can choose a selection from the flight’s standard menu.

Before the meal, American serves warm nuts in ramekins with a beverage. On longer transcontinental flights, there might be a snack basket or additional refreshment before landing. On flights without a meal, American offers first class a selection of snacks from a basket.

Flights outside of traditional meal windows or on flights between 700 and 899 miles during meal times receive snacks (Lite Bites) served on a tray. These include things like sandwiches, fruit and cheese, or crudite and dips.

Flagship First perks at the airport

First class passengers can use priority check-in lines and accelerated security queues at some airports. Airports like Los Angeles, New York JFK and Miami have Flagship First check-in areas where passengers can check in before being escorted to the front of the security line by a staffer.

Travelers can check two bags without charge, and these carry priority bag tags so they are delivered first upon landing. During boarding, first class passengers have priority boarding through a dedicated lane.

Flagship First passengers can access American’s Admirals Clubs on their day of travel, as well as the Flagship Lounge, which American operates in select gateway airports. Flagship Lounges have large buffets of food dishes and snacks like sushi, soups and salads. Self-serve bars offer a wide range of cocktails, wines, beers and champagne, and refrigerators stock bottled water, juices and sodas.

Travelers flying into London Heathrow are treated to another special perk: an arrivals lounge. Unique to London, it features a place to relax with a cup of coffee, refreshments, breakfast and showers. The lounge also offers clothes pressing services so travelers can go straight to work.

For starters, American’s Flagship First seats are all 180-degree lie-flat. They all offer direct aisle access, which is a huge plus since travelers never have to step over anyone to get out. 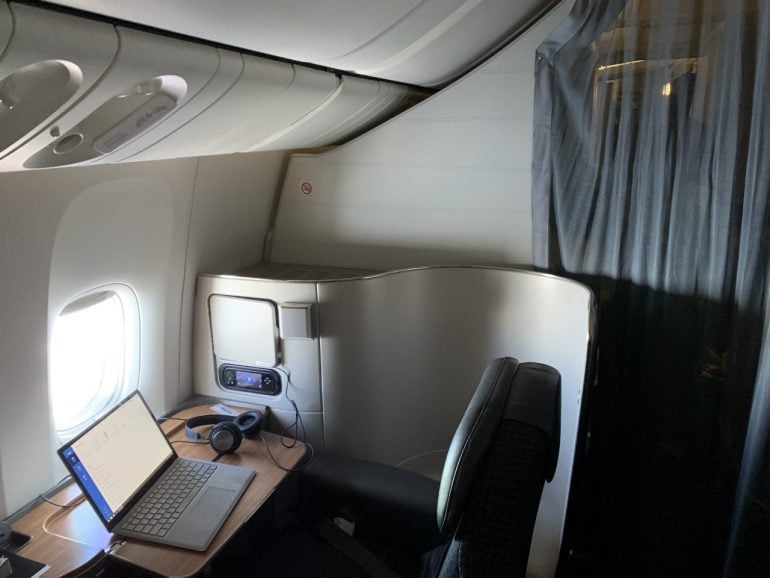 On the Boeing 777-300ER, there are only eight seats, and each swivels to the side so that it can be set up like a desk or small office. This is great if you want to look out the window while you work. 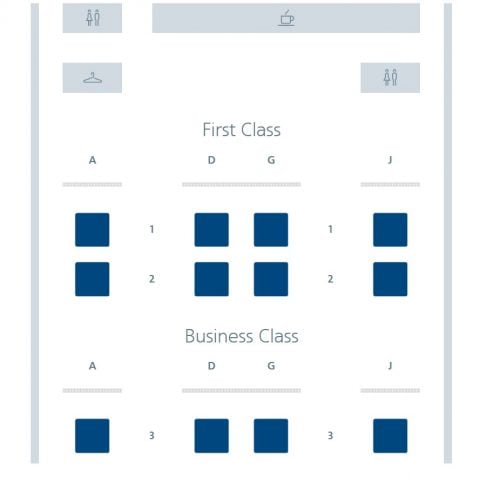 The seats are in a 1-2-1 configuration in a separate cabin away from business class, and there are two flight attendants to take care of eight passengers. The seats offer ample storage space with nooks for smaller items and side pockets to store tablets or your phone. Power outlets and USB ports are at every seat and generally within easy reach.

On board, passengers will find a bottle of water waiting at their seat as well as an amenity kit. There is also a comfy duvet and oversized pillow, which are part of American’s partnership with Casper bedding. Amenity kits feature a coupon for Casper bedding should you wish to buy these products at home.

A variety of movies, TV shows, audio programming and often live TV is available on large screens at each seat. American also gives passengers access to Apple Music while they are flying.

Before takeoff, American Airlines flight attendants offer trays of orange juice, water and sparkling wine. Printed menus are delivered to each passenger (or are waiting at each seat) to explain what is on offer. Multi-course meals begin with an aperitif service with warm nuts and a tablecloth on the tray table.

American’s first class service on long flights is customizable with side dishes that can be added upon request. Everything is plated on the table rather than served on a tray as in business class. Drink refills are plentiful, and while service can vary depending upon the crew, it is generally exceptionally attentive given that there are two flight attendants to serve eight people.

American is the official airline partner of the James Beard Foundation, and some of the menu choices have been designed by talented chefs. Travelers can choose from one of several main courses, which usually include a beef, poultry, seafood and pasta option. Dessert usually includes a cheese plate or ice cream sundae with toppings that are added upon request.

Customers can also pre-select their meal 30 days before departure via the airline’s website.

Travelers receive bonus elite qualifying miles (EQMs) when buying tickets for American’s domestic first class or Flagship First products. Sitting in a premium cabin is always a treat, and American’s Flagship First is the last remaining international first class still operating by a North American airline. Service can vary wildly depending upon the crew, but the seat (especially when transitioned into an office setup) is a favorite among business travelers.

Planning a trip? Check out these articles for more inspiration and advice:
Find the best travel credit card for you
How to use travel rewards to afford first class
34 ways to earn American Airlines AAdvantage miles 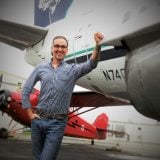 Ramsey Qubein is a freelance writer and editor who travels more than 450,000 miles a year. With 166 countries under his belt and counting, he has a wealth of knowledge about loyalty programs and credit card perks to help people travel more efficiently and in style without breaking the bank. Read more