This page is out of date

Justin Gorrell, who works on the marketing team at NerdWallet, knows a good deal when he sees one.

That’s why he applied for the Starwood Preferred Guest® Credit Card from American Express four years ago, when AmEx offered him a 40,000-point sign-up bonus worth roughly $920, according to NerdWallet valuations. The usual bonus is more modest: Earn 75,000 Bonus Points after you use your new Card to make $3,000 in purchases within the first 3 months. Terms Apply.

Since getting the card, Gorrell has used it as his primary credit card all over the U.S., and in Puerto Rico, Italy, China and Thailand.

NerdWallet values Starpoints at an impressive 2.3 cents each, more than double the industry average. They can be transferred to several other loyalty programs at a 1:1 ratio, making them among the most valuable and flexible rewards on the market. The card’s annual fee is $0 for the first year, then $95.

Here’s what Gorrell has to say about his experiences with the card.

“I rented a lot of cars in the last few years, and [the card has] added protection. Outside of the 1:1 transfers, that’s probably my favorite feature.” 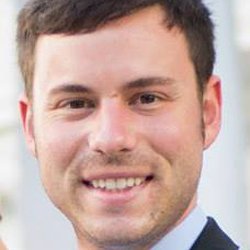 The Starwood Preferred Guest® Credit Card from American Express comes with secondary car-rental coverage. That means your card would cover any damage that your regular car insurance didn’t cover first. However, you can upgrade to AmEx’s primary coverage by paying a flat daily fee.

Gorrell adds that he has transferred Starpoints to American Airlines AAdvantage miles at a 1:1 ratio a few times, too.

He notes that the card no longer charges foreign transaction fees — a good thing, since he uses it abroad. Despite American Express’ relatively low acceptance rates abroad, retailers in major foreign cities Gorrell has visited generally take the card, he says.

What was the most memorable trip you’ve paid for with your card?

Gorrell recounts his trip to Italy, where he met members of his extended family for the first time. The meeting came about in an unexpected way.

“Six years ago, this guy hit me up on Facebook with this family tree tracing back to the 1700s. It was like this 90-page document about my family. This guy was my 18th cousin twice removed, or something,” Gorrell says. Through that document, he learned more about the village near Naples, Italy, where his great-grandfather lived before immigrating to the United States in the 1920s and becoming a prominent politician in Chicago a couple of decades later.

A few years ago, when Gorrell used his Starwood Preferred Guest® Credit Card from American Express to book a flight to Italy, he remembered what his distant cousin had told him about his relatives in Italy. Before leaving, he asked his cousin, “‘Hey, is there anyone still in that village who’s related to me?’ And he was like, ‘Yeah, actually your great-grandfather’s sister’s kids are there.'”

After spending five days in Rome, he rented a car and drove down to the village where his great-grandfather was born.

“I met my great-grandfather’s sister’s son, who would be my grandfather’s age, about 85. And then we met my parents’ generation, and then we met the ones who were our age,” Gorrell says. “We talked about a lot of the same people. Through my mom, and through my grandparents, I had heard so much about the village and where they came from, so I felt an immediate connection there.

“It’s kind of crazy that these people you’re related to are living in what appears to be a parallel universe to your own,” he says. “You can’t see it, and you don’t really understand it until you actually go there.”

How do you redeem your points?

Mostly for hotel stays and airline upgrades, he says.

“How I’ve used them, from an airline perspective, is not to book flights, but to upgrade on flights,” Gorrell says. The upgrades he’s gotten so far have been modest but worthwhile, he says. “It was incredible in the sense that I felt very well-rested when I got off the plane. That, to me, was worth it.”

A few years ago, Gorrell also used his rewards to book a luxurious Starwood hotel in Bangkok, Thailand — six nights for 19,000 Starpoints. “I definitely got 6 cents per point” when he divided the cash price listed by Starwood Preferred Guest online by the points price, he says.

He remembers arriving in Bangkok at 2 a.m. in a cab. “It was smoggy, but the city was so lit up,” he says. At the ground level, “it was a concrete jungle. Vendors all over the place. Neon lights everywhere.”

After staying in Bangkok, he and his girlfriend at the time spent the rest of their 15-day trip exploring Ko Pha Ngan, a small island, and Chiang Mai, a major city in northern Thailand.

In Chiang Mai, “We got to ride the elephants at sunrise, which was incredible.”

“Just the annual fee,” he says, but he adds that he’s careful to get the most value out of each point he earns. “I think over the course of time, I’ll stay at enough Starwood properties that it will be worth it.”

If he manages to get 6 cents out of each point, that should be easy.