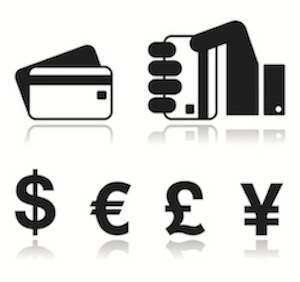 For most Americans, using credit cards is such an everyday occurrence that we don’t often stop to think about how our charge-happy lifestyle compares to the spending habits found in other countries. After all, who has time to question cultural norms when we’re busy racking up credit card rewards?

But now that we’ve brought it up, you may be wondering if people in other countries use credit cards as much as Americans. Let’s take a look at the details to see how our plastic habits stack up to the rest of the world’s.

Born in the USA? You probably use a credit card regularly

Before digging into credit card usage data from around the world, it’s important to be clear about how often and how much Americans are charging.

In short, people in the United States love their credit cards: in 2009, 156 million of us had credit card – this represents about half of the country’s population. That same year, the total credit card purchase volume was $1.94 trillion. That’s a whole lot of swiping!

Unfortunately, Americans aren’t great about paying off their balances every month. Exact statistics are hard to obtain, but experts estimate that the average U.S. household is carrying somewhere between $9,000 and $15,000.

These numbers clearly show that Americans use credit cards frequently – for purchases large and small, we’re always ready to swipe. And, as the average household credit card debt statistic shows, Americans are willing to use their cards even when we don’t have the cash to pay the bill within 30 days.

Credit card use is growing worldwide

An uptick in consumer spending is often seen as a sign of economic development, which means that as countries become wealthier, credit card use increases.

For instance, China’s economy has been growing at a break-neck pace for years – and so has the use of credit cards. In 2011, Chinese citizens charged an average of $297 to their cards. That might not seem like much, but it’s a 67.7% jump from 2005. Interestingly, the Chinese are also using their credit cards to buy specific products – large purchases like electronics and appliances are most likely to go on plastic.

Another example of a developing country that has significantly increased its credit card usage recently is Brazil. In the past five years, the availability of consumer credit has increased substantially in South America’s largest nation; the average Brazilian is now spending 20% of her monthly income on debt repayment. Like Americans, many Brazilians have begun carrying a monthly balance on their cards, and a spate of recent defaults has caused some economists to worry that credit has become a little too easy to obtain.

But in other countries, more charging doesn’t necessarily mean greater debt levels. For instance, Canadians charge a lot to their credit cards each year -$7,406. However, the majority of our neighbors to the north – 64% – pay off their balances in full every month. This is a perfect example of how using credit cards isn’t necessarily dangerous as long as you’re willing to pay up when the bill comes due.

Another interesting worldwide trend to consider is the relationship between credit card usage and savings rate. It seems that the more a country’s citizens use their credit cards, the less they save.

For example, the average Frenchman only charges $267 per year to his credit card and saves over 10% of his income. The average American charges $4,236 and saves only about 4% of her earnings.

Partially, this has to do with cultural values – it’s much more socially acceptable to carry debt in the U.S. than it is in other countries. But on the other hand, structural differences in America make it easier to fall into the red in the first place. For instance, many people in the U.S. use credit cards to pay for big medical expenses that are covered by government health care programs in other countries.

The takeaway: the society you’re a part of has a big influence on how much and how often you’re likely to use your credit card. Just remember that there’s no need to replicate any of the bad credit customs of the country that you live in for the sake of fitting in. Why not show off how cultured you are by imitating the credit card payoff habits of the Canadians and the savings traditions of the French?