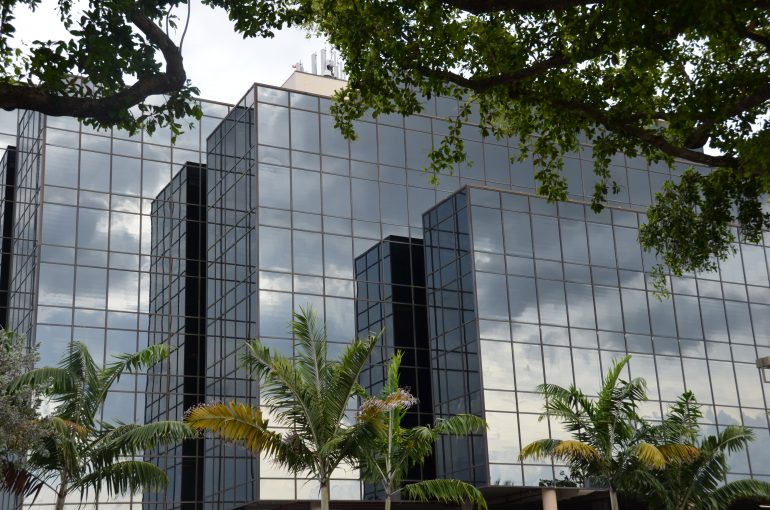 After Consumer Assistance Project LLC was evicted from other quarters, its call center operated from a Coral Gables, Florida, structure known as the Darth Vader building for its hulking black-glass exterior. Richard Read/NerdWallet

Yet Academic Debt Alliance LLC, which charges borrowers to prepare loan-reduction applications they could file for free online, continues operating everywhere else from its call center in Florida’s Palm Beaches, a region where national debt relief scams sprout like kudzu.

Like many penalized student loan adjusters, managing partner Richard Eyring II can speak from experience in counseling debtors. He filed Chapter 7 bankruptcy in 2007, according to Maryland public records.

Eyring and his business partner, Blaine Burdette, say that among many competitors, their company stands out for truly helping borrowers.

“There’s a black cloud over this industry, but we’re a shining light,” Burdette said. “We feel like what we do is worthwhile because a lot of the people who get to us are on their last breath” financially.

Setting aside Burdette’s claims of good work, his view of the industry’s reputation is beyond dispute. Companies promising debt relief are siphoning millions of dollars from  financially distressed borrowers as student loans soar to nearly $1.4 trillion, a NerdWallet investigation has found.

Scammers profit by luring struggling borrowers with promises to lower or forgive debt.

At best, phony debt relief companies sign up debtors for government programs they could access for free online. At worst, companies get permission from borrowers to access their loan accounts, then change passwords and let payments lapse, leading to seized tax refunds, garnished wages and ruined credit.

To warn consumers, a new NerdWallet Student Loan Watch List flags more than 130 businesses investigated, sued or penalized by officials or judges, or rated D or F by the Better Business Bureau. Others are listed for amassing significant tax liens, for having owners who haven’t managed their own debts or who own separate companies with such issues.

Federal regulators have failed to crack down on fraudulent companies operating nationwide, NerdWallet found in a nationwide review of public documents. State attorneys general have banned businesses, but as with Academic Debt Alliance, companies often remain free to do business in other states.

Deanne Theodore, a 50-year-old National Louis University alumnus in Chicago’s western suburbs, had about $100,000 in loans from her MBA degree when a relative told her about First American Tax Defense LLC, a Delaware company offering debt help.

“That company promised the world,” said Theodore, who said a First American rep told her he could halve her monthly payments. First American charged about $1,000, she said, before she realized the company provided nothing she couldn’t do herself by applying for U.S. Education Department loan programs.

A private detective, Theodore felt humiliated at being duped. She filed a complaint with Illinois Attorney General Lisa Madigan’s office and received a refund. “It’s horrible,” she said, “what we as humans do to each other.”

Madigan, one of the nation’s most aggressive prosecutors of student loan fraud, obtained a 2015 court settlement banning First American in her state. But as with Academic Debt Alliance, the agreement signed by company representatives admitted no wrongdoing and left the venture free to operate in all 49 other states.

Washington’s attorney general has imposed similar agreements on 15 out-of-state companies in the last year. Bob Ferguson has ordered $1.2 million in restitution — to Washington residents only.

“We’ve been struggling doing it, but we didn’t have any problem complying,” said Eyring, the managing partner.

Eyring, Burdette and Melissa Burns, a third Academic Debt Alliance co-owner, must pay monthly installments through October to return a total of $27,000 to Georgia customers.

Under terms of the compliance agreement, each page of the company’s website proclaims in at least 12-point boldface type: “These services are not available to Georgia residents.”

Academic Debt’s co-owners describe their venture, founded in 2014, as a startup with furniture bought at Ikea. It’s small compared to competitors that field 100 or more telemarketers.

Eyring, billed on LinkedIn as a former mortgage banker, supervises about eight call-center employees in three adjoining offices overlooking a parking lot. “This is a great service for people who are really busy,” he said.

The business is a second act for Eyring, who listed assets of just $3,000 — clothing, a laptop and two watches — and liabilities of $93,000 in his bankruptcy proceeding. As a condition of the filing, Eyring signed a sworn statement saying he’d been briefed on opportunities to receive credit counseling.

According to Georgia’s attorney general, Eyring and his partners offered budget counseling, debt management or other services, illegally and falsely representing products and overcharging consumers.

The partners didn’t dispute the prosecutor’s statements. Eyring says his financial history is irrelevant because he doesn’t personally talk to customers or advise them.

“People that I hire, none of them have bankruptcies,” Eyring said. “They’re all licensed, they have telemarketing licensing” by the Florida Department of Agriculture and Consumer Services, he said.

Burns said she’s known Eyring since they attended Ohio Wesleyan University. She worked on a recent day in a fourth office at a desk topped by a sheaf of manila file folders. Divorced with a daughter in college, Burns said she met Burdette through his wife, who kept a horse on her property.

“We have people call in tears” concerning their student loans, Burns said recently. She said the company had landed 14 new clients the previous day.

“All I know is we pay them and they get people,” Eyring said.

Burns said she wished the company could afford expertise on search-engine optimization. The company could land more customers by using the digital alchemy that pushes sites higher in web-search results, she said.

“We target teachers, nurses, people that qualify for public-servant repayment plans,” he said. “You can do it on your own for free. We tell our clients that.”

A fraudulent student loan debt-adjustment company can rake in more than $1 million a year, judging by restitution figures and court depositions involving other companies that NerdWallet reviewed.

Restitution figures provide another window on the scale of fraud.

San Diego-based Libre Technologies Inc. must return $370,000 obtained from 323 Washington residents under terms of a consent decree. Massachusetts is forcing $160,000 in refunds by Libre to more than 400 state residents.

“Our representatives are helpful, trustworthy and highly trained in document processing,” the Libre/Student Loan website says. “We’d like to add you to the list of satisfied clients.”

With no licensing requirements in many states, the industry is open to anyone. Public records reveal that many company owners have checkered histories, racking up tax liens and filing for bankruptcy.

Borrowers who gave personal financial details to Student Debt Relief LLC, a St. Petersburg, Florida, company whose website has shut down, might be surprised to know of its owner’s background.

Florida court records show that Toron “Tory” Larkins has multiple felony convictions for cocaine dealing and possession and a conviction for failure to redeliver leased property. Larkins served 15 months for six of the cocaine convictions before being released in 2012, according to Florida Department of Corrections records.

California debt adjusters Consolifi Inc. and Performance Settlement LLC and their owner, Daniel Crenshaw, have incurred tax liens, some in the tens of thousands of dollars, public records show.

The Illinois lawsuit accuses Broadsword of charging consumers for debt relief services available for free. Company agents got customers to give them loan-account access and then limited communication between consumers and debt servicers, the 2014 complaint asserted.

In an interview, Talbert denied charges that the company conducted debt settlement. “All the company did was fill out forms for people,” said Talbert, claiming the suit killed Broadsword.

The only entities Broadsword hurt were loan-servicing companies, by removing borrowers from expensive payment plans profitable for the servicers, he said. “Now there are some crooks,” he said.

On Capitol Hill, members of Congress are deadlocked along party lines.

Democrats on the U.S. House Committee on Oversight and Government Reform say they want to call company managers to testify at a hearing. Republicans voice skepticism amid partisan bickering.

At a House Oversight Committee hearing May 3, lawmakers condemned predatory practices and pushed a top Education Department official to explain the lack of enforcement.

“Something about this, it just tears at my heart,” Rep. Elijah Cummings, D-Md., said at the hearing. “It would be legislative malpractice for us not to protect these students.”

Runcie said some companies have changed account settings to block communications between debt servicers and borrowers, and then pocketed money that customers gave them for loan payments.

“The questionable nature and value of those services is not something that we police,” said Runcie, who subsequently resigned from the agency. “We don’t have any control over those entities.”

Rep. Jamie Raskin, D-Md., asked Runcie whether the appointment of a federal student loan ombudsman could protect borrowers from rip-offs.

“The overall institutional sense that I get is one of basic passivity and reactivity to events rather than getting on top of it,” Raskin said.

“The Education Department needs to do more to hold legitimate loan servicers accountable for helping students so they don’t fall into the waiting arms of scammers charging for assistance that students are supposed to receive for free,” said Warren, a Massachusetts Democrat.

The U.S. Consumer Financial Protection Bureau is pursuing another angle, trying to get major online companies to block advertising by phony student loan debt relief firms. But two years after sending a letter to Google, Facebook, Yahoo and Bing, the agency hasn’t gotten ads pulled down the way some search engines have blocked advertising for payday loans.

“Deceptive and misleading ads are not acceptable, including those for fraudulent student loan debt relief,” said a Yahoo spokesman, who declined to be identified.

But Yahoo had no details on steps taken to block such ads. A spokesman for Microsoft, Bing’s owner, declined to comment. Google and Facebook did not respond to interview requests.

This updated story clarifies that Academic Debt Alliance LLC and its owners entered a settlement with the Georgia attorney general, agreeing to stop providing debt adjustment services to consumers in the state, and to pay a fine and restitution to former customers. The agreement was filed with a court, not ordered by the attorney general or the court.