The Creative Sound Blaster Roar SR20 is a portable Bluetooth speaker that promises killer audio and a killer design. But is it really as powerful as its name claims?

We took a close look at the Roar SR20 to help you decide if it’s worth your investment. Users report that it really does roar, as its name suggests, but that it’s not as portable as some of its competitors. 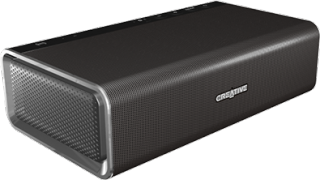 The Sound Blaster Roar SR20 is a rectangular speaker with a metallic finish and what the manufacturer calls an “industrial chic” design.

It weighs 2.5 pounds. It’s also cordless, which bodes well for mobility, as it’s not restricted to a spot in your house next to a power outlet. The speaker’s battery lasts for eight hours on a single charge.

Techies will want to know that the Roar SR20 is built with two performance amplifiers and five speaker drivers. For ordinary listeners, that means the relatively compact speaker can deliver loud, striking sound that fills large spaces.

It has three different connector types for audio input: aux-in, Bluetooth and USB. It doesn’t discriminate against your preferred technology, either; it works with both iPhone and Android devices. Plus, you can connect it to tablets, computers and even the PlayStation 4.

So what else can it do? We rounded up some of the most compelling features:

To get a more comprehensive sense of the Roar SR20’s strengths and weaknesses, we analyzed expert opinions about the speaker from review sites such as CNET and The Sweethome. Then we studied reviews by actual users.

Some reviewers described its sound as crisp, clear and powerful, earning a 9.5 score in clarity/quality. They also praised the bass, especially when activating the TeraBass feature, an on/off setting designed to compensate for the lack of bass typical in low-volume playback.

Something certain users didn’t like so much? The speaker’s weight, which was rated at just 6.5. Although the 2.5-pound speaker is lightweight enough to tote from room to room, some users found that it’s not as convenient for bringing along on hikes, backpacking trips or prolonged outdoor activities.

The Roar regularly retails for $199.99 from Creative, but it’s been marked down to $109.99. At the time of this writing, the speaker is out of stock from the manufacturer’s website, but consumers can sign up for a notification when it becomes available.

The speaker is also sold by third-party retailers such as Dell and Amazon, where it’s eligible for free two-day shipping for Prime members.

So is the Creative Sound Blaster Roar SR20 the speaker that you’ll want roaring through your home?

If you’re looking for a speaker that can become your home’s personal sound system, the answer is yes. The Roar SR20 delivers big sound in a small package. Plus, it can charge your phone, record your favorite songs for later and sing you to sleep.

Creative sells other Sound Blaster speakers, too, including the Sound Blaster Roar 2 — a smaller, lighter (2.2 pounds) and more expensive version of the original Roar.

But if you’re looking for a rough and tough speaker that’s more inclined to outdoor adventures, take a look at the ultra-portable Amazon Tap or the waterproof UE Megaboom.