Drones accompany you on unforgettable adventures and capture priceless memories along the way. Drones themselves, however, are far from priceless.

The Parrot Bebop 2 and the DJI Phantom 4 are both camera-equipped quadcopter drones built for indoor and outdoor use.

Each has four arms branching out of the center, with raised propellers attached. However, the Bebop 2 is more streamlined; it has small feet below the propellers and its camera is built into the body. The bulkier Phantom 4’s camera hangs below the drone and is framed by two U-shaped landing gear bars on the sides. The Bebop 2 has an LED light on the back; the Phantom 4 has both front and rear LED lights.

The 1.1-pound Bebop 2 is lighter and more portable than the 3-pound Phantom 4. The Bebop 2 is sold in white and red colors, while the Phantom 4 is available in white.

The Bebop 2 covers the basic drone necessities. It has a built-in camera with a 180-degree “fish eye” lens that captures 14-megapixel images and 1080p full HD videos from an aerial perspective. A stabilizer steadies the camera while the drone is in flight. The Bebop 2 offers 8GB of internal storage for your pictures and videos.

It flies as fast as 37 miles per hour but can’t travel too far from you; the signal range is less than a quarter mile. The Bebop 2 takes off and lands with the touch of a button and hovers in place when you stop controlling it. The drone flies for up to 25 minutes on a full battery.

Additional features, like “Follow me” GPS and visual tracking for hands-free use, can be purchased through the FreeFlight Pro app. The app is free to download on your phone or tablet from the App Store and Google Play Store.

The Phantom 4 outperforms the Bebop 2 across the board. It boasts a 12-megapixel camera that records higher-quality 4K videos and 1080p slow-motion footage. The camera is attached to a component called a gimbal, which stabilizes it and keeps your footage from blurring. The Phantom 4 stores up to 64GB of photos and videos with a micro SD card. 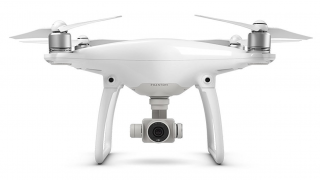 The drone offers up to 28 minutes of flying time on a full charge, a few minutes longer than the Bebop 2. It’s also faster — reaching up to 44 miles per hour — and can travel significantly farther from you, with a signal distance of up to 3.1 miles.

The Phantom 4 comes with a remote control unit, but you can also download the free DJI GO app to control the drone from your phone or tablet. Tap the screen with your finger and the drone will fly in the direction of your choice. Equipped with smart sensors, the Phantom 4 detects and responds to surrounding objects to help it avoid collisions. And unlike the Bebop 2, the Phantom 4 includes visual object tracking — the ability to automatically follow you or another subject — at no extra cost.

The cost discrepancy between the two drones is noteworthy; The Bebop 2 is listed at $549.99 and the Phantom 4 is more than double that price, at $1,199. However, we’ve seen the drones sell for less on Amazon. At the time of this writing, for example, the Phantom 4 is $997.99 on Amazon.

The high-end DJI Phantom 4 costs more than twice as much as the Bebop 2, but the price tag comes with some advantages for hardcore enthusiasts. Its camera, distance, speed, storage, battery life and smart features are all superior.

The Parrot Bebop 2 isn’t as advanced as the Phantom 4, but for $650 less it still offers the key features. It has an impressive camera, speed and battery life, and is simple to control. Plus, it’s lighter and easy to transport, and you can purchase additional features in the app if desired. If you’re not a frequent drone user, it’s probably worth saving money and picking the basic option.

Fitbit comparison: Which Fitbit activity tracker is best for you?
Kindle Fire HD8 vs. iPad mini 4
What is Amazon Prime? The benefits, the cost, and whether it’s worth it