Weddings can cost an arm and a leg. But if you’re strategic about how you pay for yours — and which credit cards you use — you could end up saving a lot on your honeymoon.

That was the case for Brittani Conley, a freelance brand strategist and aspiring author, and her husband, Stephen Archer, a senior project engineer. The couple used their credit card points on first-class, round-trip flights to St. Lucia for their tropical honeymoon.

“We knew we were going to use points,” Conley says. “My family would always use points to get an upgrade or go on an extra trip, so I’ve been doing this for a long time.”

Collecting points for their honeymoon

Conley met Archer at Santa Clara University, and they got engaged at Big Sur in September 2014. The couple each immediately opened a credit card after their engagement.

After Stephen proposed, they spent the next 21 months planning their Sacramento wedding.

In addition to putting day-to-day expenses such as food and gas on their cards, they also used them to pay for larger wedding expenses, including a custom flower wall (in lieu of an altarpiece), table rentals and a cigar bar with cigars rolled on-site. Fortunately, they worked with a wedding planner who helped them understand all the costs from the get-go. 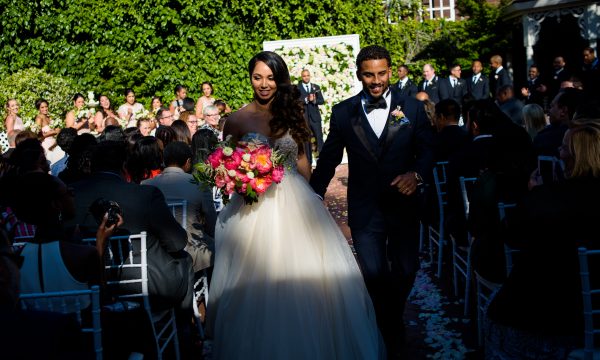 After discovering that flying first-class to the Caribbean required fewer points than other destinations, the couple settled on St. Lucia. With points, their round-trip flights ended up costing about $100 with taxes.

“Having that first-class experience was really cool,” Conley says. “We like to travel a lot, but usually do so on a budget, so it felt like splurging in an economical way.”

Using their points for flights helped them enjoy their honeymoon even more, Conley says. They used the money they saved on airfare — Conley estimates it was about $1,500-$2,000 — on luxurious living quarters.

They splurged on a two-story condo with butler service, which meant someone picked them up from the airport, unpacked their luggage, made dinner reservations and brought them wine, desserts and more.

“Butler service doubled the price of the room, but it was totally worth it,” Conley says. “After our wedding, it was really nice to sit back and have someone take care of us.”

Use points for flights. “Using points for travel is the best way to use them, and you get so much more bang for your points when you use them for flights instead of hotels,” Conley says.

Be loyal to one airline (most of the time). “We try to be brand loyal if it makes sense financially, but if we find a great deal with another airline, we’ll try it,” Conley says. “Otherwise, we’ll stick to United Airlines because their point system is one of the best.”

More ways to save on your honeymoon: