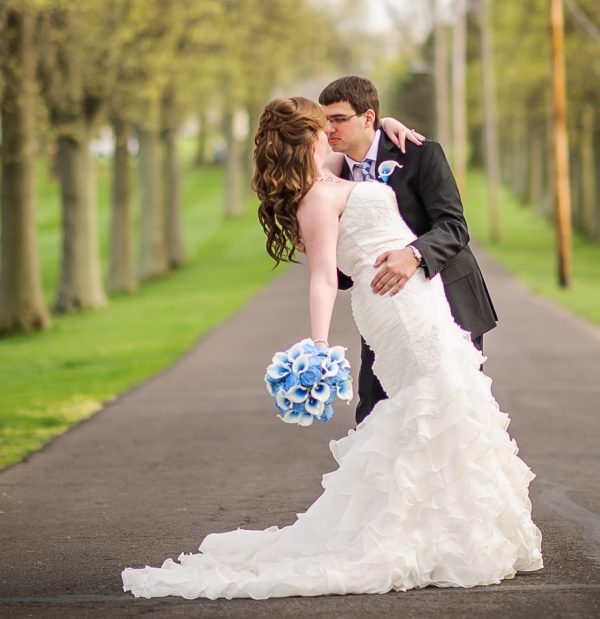 Sara and Mike at their April wedding.

How people choose to handle their money is a personal experience — one that’s often hard to discuss. In this series, NerdWallet talks with people from various walks of life to discover how they budget, in hopes that the lessons they’ve learned can help you.

Mike Holmstrom, 28, and Sara Chobert, 27, meticulously monitored — and stuck to — the budget for their April 2017 wedding. They’ve worked hard to carry that methodical approach over into their postnuptial life.

Despite having a mortgage and more than $20,000 in student debt, and encountering a few financial obstacles, the Philadelphia newlyweds describe their current state as stable and comfortable. Budgeting plays a huge role.

Here’s how they budget and what their experience can teach you.

Sara, who does administrative work for a home security company, and Mike, a consultant at a computer software company, say communication is their strong suit. The couple were together for four years before their engagement, and the money talks began long before they agreed to tie the knot.

“I think after nine months of dating we started looking at apartments, so we talked about our finances right then and there — what we could afford in an apartment, who was going to pay what. We divvied all that out ahead of time and I knew what he made, he knew what I made,” Sara says.

The pair have remained upfront about their income, debts — Mike brought a mortgage into the marriage and Sara brought student loans — credit scores, goals and expectations throughout their relationship. Open discussions were particularly important when they made major decisions, such as setting a wedding budget, purchasing new cars and updating their home.

So they could hold each other accountable for their wedding budget, Mike created a series of Google Drive spreadsheets, which both could easily access. They recorded every wedding-related purchase and categorized them all in a master spreadsheet.

Sara and Mike still use spreadsheets to budget. They’ve replaced wedding costs with expenses such as home improvement projects and everyday purchases, “down to a dollar spool of ribbon,” Sara says. To set their monthly budget, they total their fixed and estimated variable expenses and subtract this number from their income. They split the remaining amount between savings and other goals.

NerdWallet recommends allocating 50% of your monthly income for necessities, 30% for wants and 20% for savings and debt repayment.

Paying off student loans within the next five years and saving for retirement are the twosome’s top concerns. Extra funds go toward those goals first. When Mike received a small raise earlier this year, he put it all into his 401(k).

“We’re living comfortably with our current income level. I might as well start planning a little more towards the future,” he says.

The couple aim to be debt-free in retirement so they can travel. But making payments and setting aside savings means making the occasional trade-off, such as sidelining home renovations, vacations and eating out.

“We’ll sit down together and say, ‘We have X number of dollars that we can spend on this project,’ and there’s been cases where we just didn’t have the money to do the things we wanted to do,” Mike says.

He and Sara usually take a comprehensive look at their budget during tax season or when there’s a change in income. They fund an annual vacation with their tax refund, so if they don’t receive one or need the money for other expenses, they’ll skip traveling that year.

Use the debt avalanche method

Mike and Sara use a debt repayment technique known as the debt avalanche. They review all of their debts — including student debt and their mortgage and auto loans — and prioritize their payments based on which has the highest interest rate.

“The student loans have the highest interest rate, so we’re working the hardest to get them down, whereas the car loans are less than a percent, so we have no real incentive to pay them off early,” Mike says.

By attacking higher rate debts first, they’ll pay off their balances faster and save money over time. So far, they’ve whittled their student debt down from $64,000 to a little more than $20,000. Watching this number drop keeps them motivated.

“It started out as a 30-year loan. I’m six years into it and have less than five years left. Every extra little bit that I’ve gotten I’ve put toward the loan, so I’ve actually cut off a good 19 years on my loan,” Sara says.

As the couple can attest, it’s not always smooth sailing financially, but they make it a point to plan for the unexpected. They’ve built an emergency fund that can cover several months’ worth of expenses in case of an event like a job loss. The reserve has saved the day multiple times, including when they needed to replace their home’s heater in the middle of winter and when their refrigerator broke.

The newlyweds don’t take all the credit for their healthy financial practices. Their upbringings and family relationships shaped their approach. Mike says his father, who had a 35-year career in accounting, taught him the basics and importance of budgeting.

“From his hammering it in my head from a young age and also school I’ve kind of just picked up a lot,” he says.

When Sara was in college, her mother retired. This got her thinking about her own retirement strategy.

“Seeing what [my parents] were going through, just kind of how they were managing without my mom working all of a sudden kind of instilled that ‘yeah, you need to save money for retirement now,’ because I’m well aware that by the time we retire, there’s going to be no Social Security left,” she says.

Whether that transpires or not, the earlier retirement saving begins, the better.

Sara’s family is also a driving force behind her aggressive student debt repayment, because she borrowed her loans against her parents’ home equity.

“They consolidated all my student loans for me, so I pay that off. And that’s kind of a guiding factor as well for paying it off early. If I don’t pay my student loan, my parents could lose their house,” Sara says.

Find your own system

Mike likes to make spreadsheets. But he and Sara know that not everyone is the same way. They suggest using a budgeting app or finding pre-made tools and templates online if you’re less hands-on.

Sara says using the template Mike built for them made budgeting easier for her. “Once everything was all figured out for me, it was easy to plug it in. It didn’t seem daunting at all because I was doing it as I was spending it,” she says.

You might not want to track every detail. Maybe you’d rather check your account balance, write down a few goals and automate your savings. Whether you’re budgeting for a wedding or your happily-ever-after, use whatever process works for you. 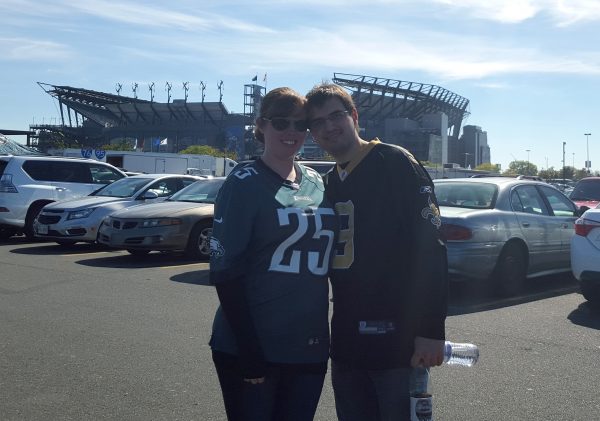 Sara and Mike at a football game in Philadelphia.