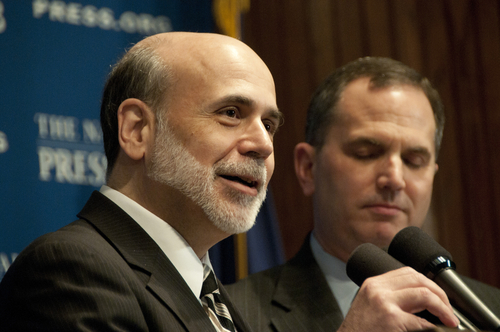 Update: The Fed released stress test results March 6th showing that all but one of 18 big banks (Ally Financial) tested has ‘passed the test,’ proving the capital and strength needed to weather a future economic shock.  The official March 2013 stress test results are available here.

In March, federal regulators will release the results of stress tests performed on big banks, designed to evaluate how well U.S. banks and the financial system could cope with a future economic shock.

The front pages of today’s newspapers no longer feature the daily threat of Greek default, an imminent bursting of the real estate bubble in China, or the pending implosion of the entire financial system. However, despite the change the media’s focus, many of these risks are still present. The upcoming bank stress tests will help us quantify the risk and magnitude of another financial crisis.

NerdWallet lays out what to expect come March 7th as well as how bank stress tests work.

The Dodd-Frank Act signed into law in 2010 mandated that all banks with over $50 billion in assets would undergo annual stress tests run by the Federal Reserve, and semi-annual tests run by the companies themselves. These tests essentially apply worst-case economic scenarios to the balance sheets of banks to determine whether the largest and most critical players in our financial system are properly equipped to survive an unanticipated crisis. For example, last year’s stress tests featured a fairly terrifying hypothetical situation in which unemployment hit 13%, equities dropped by 50%, and home prices declined 21%.

For the upcoming stress test results due to be released on March 7, 2013, some of these institutions that might be considered “too big to fail” will go through trial by fire. The results are important not only to the share prices of the specific banks, such as Citigroup, JP Morgan, and Bank of America, but also to general confidence in the financial system and, by extension, the economy.

According to the Federal Reserve, the extreme economic circumstances considered in the stress tests affect banks primarily through losses on loans that they have made, decreases in the value of securities held through trading activities or simply as investments, and provisions for lawsuits and mortgage repurchases. These fluctuations manifest themselves in the respective bank’s Tier 1 capital ratio, which is the ratio of Tier 1 capital to total risk-weighted assets.

Tier 1 capital is defined as a bank’s core capital, or its common stock and retained earnings. This excludes capital such as preferred stock or subordinated debt. Risk-weighted assets (RWA) are, as the name implies, the bank’s assets weighted by their respective risk. For example, a risky loan might be valued at 100% of its face value, whereas holdings in US treasuries might be considered riskless, and therefore be valued at a 0% weighting and add nothing to total RWA. Defined as Tier 1 capital divided by RWA, the Tier 1 capital ratio captures a bank’s ability to adequately cover the risks it’s exposed to. The Federal Reserve defines an adequate Tier 1 capital ratio as 5% and above, so any bank falling under 5% under the stress test is potentially in danger of undercapitalization and therefore insolvency. As shown in the chart above, three out of 19 banks (Ally Financial, Citigroup, and SunTrust Banks) failed to meet this benchmark in last year’s stress test, and were deemed to be in danger of undercapitalization. This had negative implications not only for the three banks, but also for general confidence in the economic recovery.

As the March 7 release date of this year’s stress test results rapidly approaches, all eyes are on the banks to see whether or not our battered financial system can regain the trust necessary for it to function.

This year, the “severely adverse scenario” tested is a recession in the United States that lasts about a year and a half, during which real GDP declines nearly 5%, unemployment rises to almost 12%, equity prices fall 50%, and home prices decline over 20%. While similar to last year’s scenario, this situation also incorporates a more substantial slowdown in Asia. Regardless, this is clearly a tail-risk scenario that is extremely difficult for the Federal Reserve to predict accurately, let alone us. However, using the somewhat simplistic method of extrapolating last year’s deterioration in Tier 1 capital ratios to the most recently reported Tier 1 capital ratios, we can get an idea of what to expect. Based on this extrapolation, Ally Financial and Keycorp will be in danger of undercapitalization this year. Of course, if the CEOs of these banks have done a good job over the last year in increasing the quality of their capital or their assets, we would expect smaller capital ratio drawdowns in general, and evidence of stronger capitalization even under stress.

Looking just at changes in Tier 1 capital ratios from last March to the present, we can see that most banks have increased their capitalization to a slight extent, with Bank of America, Morgan Stanley, and Regions Financial notably increasing their ratios. Among others, Ally Financial and Keycorp both saw their Tier 1 capital ratios decline: Overall, our financial system does seem to have strengthened over the last year despite frustratingly slow economic growth. My best guess is that the Fed’s bank stress tests will reflect that same slow grind upwards. Unless the Fed tells us otherwise on March 7, at least we can be reasonably certain that the next economic crisis won’t stem from the financial sector. That may be a small victory, but a victory nonetheless.