Yesterday, minutes from the Federal Reserve’s July meeting were released. They indicate that some members have concerns about raising interest rates while inflation stubbornly remains below 2%. While there were mixed opinions on whether now is the right time to increase the federal funds rate, there was consensus that the Fed will soon be ready to reduce its bond holdings.

The U.S. central bank meets again in late September, but at the moment, it appears unlikely that rates would be increased before the December meeting. 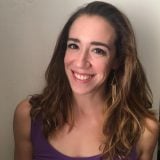 Emily Starbuck Crone is a former mortgage writer for NerdWallet. Her work has been featured by USA Today and MarketWatch. Read more