If you spend hundreds of dollars every eight weeks for highlights and upward of $50 per month on shampoo and conditioner, subjecting your tresses to a $12 drugstore hair dryer seems counterproductive and, frankly, a little cruel. To help you figure out whether a pricier model is right for your locks, we compared two very high-end blow-dryers head to head. 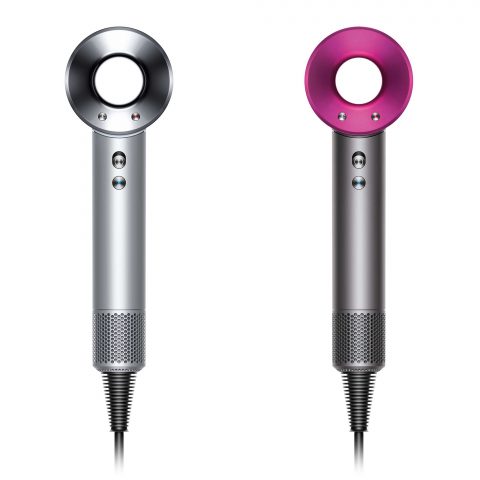 The Dyson Supersonic isn’t a normal blow-dryer: It looks more like a high-tech lollipop than a grooming aid. Traditional dryers are gun-shaped, but this sleek hair tool has a dark gray cylinder handle topped by a dark gray open blower tube. The tube interior is fuchsia, but you can also choose a silver/white model.

By comparison, the T3 PROi Professional hair dryer looks more like a traditional hair dryer with its sturdy, matte black exterior and shiny metal accents. But even with its faceted detailing, it looks, well … kind of boring next to the Dyson.

The T3 PROi Professional is built for hairstylists, who spend hours each day using a blow-dryer, so its weight is nearly as important as its efficiency. And the T3 doesn’t disappoint, weighing in at 1.3 pounds.

At 1.8 pounds, the Dyson is slightly heavier, but its digital motor weighs about half as much as a typical blow-dryer’s, according to the company. It’s also situated in the handle instead of the barrel, which changes the balance of the unit.

The one that feels best in the hand might depend on the individual. 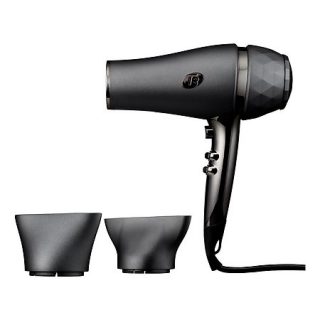 As any freshly showered person in a rush will attest, few things are as annoying as waiting for your hair to dry. Blow-dryers combine air velocity with heat — both elements dry hair on their own, but put together, they do so more efficiently. Both these dryers claim to be more efficient than cheaper dryers while inflicting less damage on hair.

It’s no surprise that Dyson, known for its vacuums and other air-moving devices, says it has mastered the blow-dryer. The machine blasts air — at an incredible 85 cubic feet per minute — through Dyson’s patented Air Multiplier, creating a concentrated, high-pressure stream of heat. And its Intelligent Heat Control system measures the air temperature 20 times per second so it can adjust the heating element and avoid frying your locks.

The T3 PROi Professional enriches air with negative ions, which the company says cause water molecules to disintegrate more quickly than air from a regular hair dryer. They also seal the hair cuticles, giving you shiny, silky hair. And the T3’s powerful motor makes for a very quick drying session.

Even if you’re used to spending $70 or $100 on a personal care appliance, you might find the Dyson Supersonic’s supersized starting price of $399.99 a bit rich. The comparable T3 PROi Professional is listed at $350. You can buy a leather carrying case for the Dyson if you pony up an extra $50.

According to reviewers, both of these dryers cut drying time by half or more — and the real miracle is that they do so quietly. An Allure magazine reviewer said the Dyson was “insanely quiet,” while a writer for InStyle called the T3 PROi “the quietest dryer we’ve ever tried.”

Both dryers come with attachments. The T3 PROi Professional has a 10-foot cord and two concentrators of differing widths that you can swap out according to your styling needs.

The Dyson, which has a 9-foot cord, has smoothing nozzle, diffuser and concentrator attachments equipped with heat shields, so, the maker says, you can switch from one to another while using the dryer without burning your fingers. The most revolutionary thing about these attachments is that they snap on magnetically, which causes less wear and tear on the dryer — the kind of design innovation Dyson is known for.

Which one should you buy?

The two dryers are roughly comparable in price and weight, and both are said to dry hair quickly, leaving it shiny and bouncy. Picking one is a difficult decision.

T3 is a trusted name in grooming aids and has been perfecting the art of blow-dryers for many years, while Dyson is better known for its revolutionary design sense. Its vacuums have a great reputation, but we don’t know how Dyson hair dryers will hold up in the long run.

If you’re a professional stylist or just someone who blow-dries his or her hair daily and is looking for a real workhorse, the T3 is probably the dryer for you. But if you’re a fan of design innovation and Dyson products, you might want to shell out an extra 40 or 50 bucks for this unique little machine.