Picking the perfect mixer for your home just got messier. That’s because KitchenAid has added a new model to its suite of kitchen products: the KitchenAid Artisan Mini.

Not sure if this appliance or one of its predecessors has everything you need? We’ll help you decide. See how the new Mini compares with the long popular KitchenAid Classic Series.

Let’s take a closer look at how these two measure up. 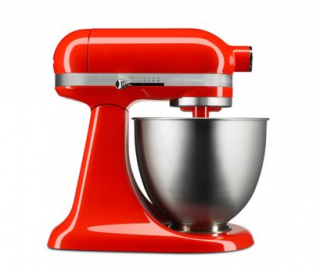 NerdWallet takes you shopping: As its name suggests, the 18-pound KitchenAid Artisan Mini 3.5-quart tilt-head stand mixer is smaller than its predecessors, but KitchenAid says it’s just as mighty.

The $399.99 mixer from KitchenAid has a 3.5-quart brushed stainless steel bowl and a tilting head for ease of pouring ingredients. It’s sold in 10 colors, including twilight blue and empire red. The mixer features 10 speed options and can mix dough for up to five dozen cookies in a single batch. It comes with a dough hook, flat beater and wire whip.

And it’s not just for baking. Like many KitchenAid mixers, the Artisan Mini has a power hub at its front. The hub is a connection center that allows Artisan Mini owners to use more than 10 optional attachments, sold separately, including a pasta maker and a zucchini spiralizer.

Good fit for: Those with limited kitchen space. The Artisan Mini delivers everything you need in a standard mixer without being bulky. Plus, its expanded color selection ensures you’ll find a match for your style. 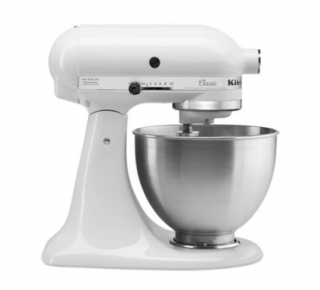 NerdWallet takes you shopping: For some, bigger may be better. The KitchenAid Classic Series 4.5-quart tilt-head stand mixer is $349.99 from KitchenAid. This Classic mixer weighs 25 pounds (7 pounds more than the Mini).

Like the Mini mixer, the Classic has 10 speed settings, a tilting head and a brushed stainless steel bowl. It’s sold in just two colors (onyx black and white), but its 4.5-quart bowl is a full quart bigger than the Mini’s, so it can fit more ingredients at once for bigger servings.

This Classic model also has a power hub, where users can connect more than 15 optional attachments, sold separately. It comes standard with a dough hook, flat beater and wire whip.

Good fit for: Bakers who want to stick to a tried and true kitchen appliance. The Classic Series has a bigger bowl — you can make six dozen cookies instead of five dozen in a single batch — and a smaller price tag. Its larger bowl is ideal if you’ll be baking for big groups.

Stir it all together

Regardless of which mixer you land on, you don’t have to buy it directly from KitchenAid. These mixers are also sold at stores like Amazon and Target, sometimes at a discounted price. KitchenAid products are also popular doorbuster deals during Black Friday sales at department stores.

And since either model will cost you several hundred dollars, consider putting your purchase on a rewards credit card to earn cash back.