Activity trackers motivate you to work on your fitness and monitor your progress along the way. When it comes to measuring the physical fruits of your labor, you may need the help of another device — a smart scale.

The Fitbit Aria and the Withings Body are smart scales that work alongside fitness trackers and apps to give readings on your performance and physique. While both measure factors like body fat and muscle mass, the Body tacks on a few extra features. But if you already have a Fitbit wearable, the Aria’s convenient pairing might win you over.

We’re weighing in on the two models to help you make the right pick.

The scales: At a glance

The Fitbit Aria and Withings Body don’t look much different from standard scales, save for their alternating screens. Both are sleek, square devices with rounded edges and glass surfaces. Each has a small digital display at the top that shows your various stats and measurements. The Aria’s display is round and the Body’s is rectangular.

Both models are sold in simple black and white colors.

» MORE: Fitbit Comparison: Which Fitbit Activity Tracker Is Best for You?

These two smart scales do more than weigh. They keep track of other important health and fitness stats, too.

The Aria tracks weight, body mass index, body fat percentage and lean mass — the measurement of your muscle, organs, bones and water — to shed light on how your weight is distributed. This can help you learn if you’re burning fat and gaining muscle.

Withings refers to the comparable Body scale as an “ideal weight loss companion.” Like the Aria, it provides an overview of your full body composition by measuring your body’s weight, fat mass, muscle mass, water and bone mass. The Body also displays the local weather and your previous day’s steps on its screen.

The Aria can measure up to 350 pounds of weight and the Body up to 396 pounds.

Each scale recognizes individual users and wirelessly (and privately) sends their data to their connected app. The Aria syncs your stats to your profile using a Wi-Fi connection, while the Body uses either Wi-Fi or Bluetooth. While you still have the option to manually log your data, you don’t have to — the smart scales do the work for you. 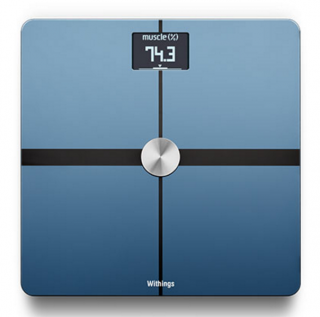 The Aria is compatible with Fitbit-family activity trackers and the Fitbit App, plus several third-party apps like the ones listed here. The Body works with more than 100 health and fitness apps, including Fitbit, in addition to Withings’ own Health Mate app. Information gathered from Withings activity trackers such as the Steel HR will appear in your profile as well.

The Aria compiles your records into charts and graphs that you can view in your Fitbit dashboard, allowing you to track your trends over time. The Body reveals your trends while you’re on the scale, showing the results of your last eight weigh-ins on the screen.

The scales are suitable for solo users and large households alike; each can remember up to eight different users and automatically recognize individuals as they step on the scale. Both smart scales are battery operated. Fitbit says the Aria’s batteries last approximately six months, while the Body’s last up to 18 months, according to Withings.

Still torn and hope the price tag will make the decision on your behalf? The Withings Body is the less expensive choice at $99.95. The Fitbit Aria retails for $129.95. They’re both often sold at discounts at other retailers like Amazon, so make sure to compare prices before you buy.

The Fitbit Aria and Withings Body are virtually the same when it comes to appearance and features. Each conveniently displays and records your stats so you can closely monitor the effects of your diet and exercise.

We recommend the Aria for those who already own a Fitbit tracker. The two will work seamlessly together to sync your stats, and you’ll already be familiar with the software.

However, the Body has broader appeal: It’s $30 cheaper, supports more weight, is compatible with more apps and has a longer battery life. Plus, it displays past weights, step count and the weather on-screen to help serious fitness buffs stay informed, which the Aria does not.