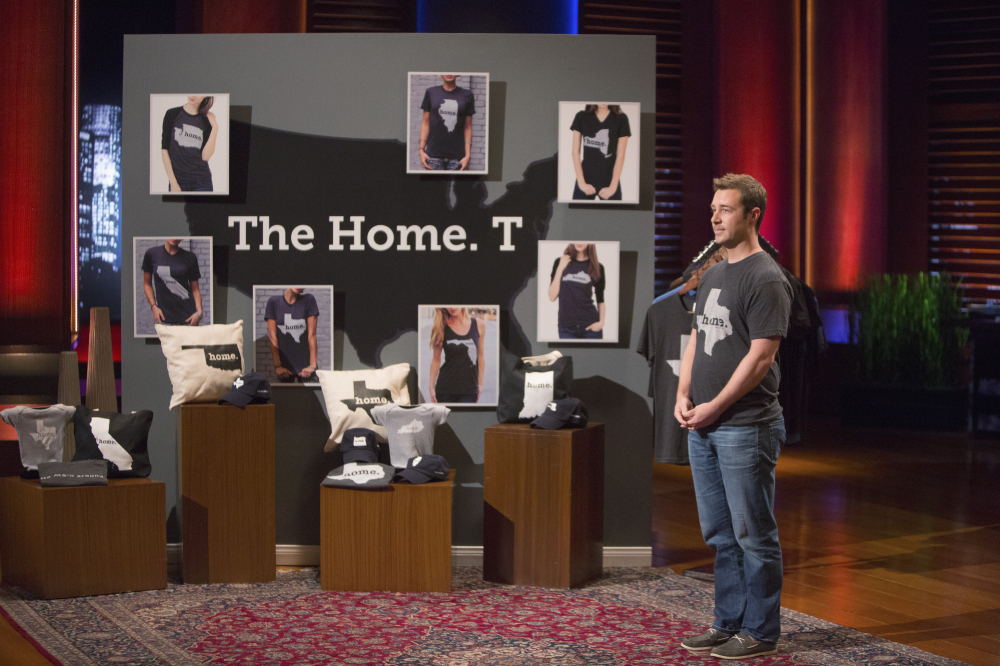 This week, we learned about the “Shark Tank gold digger.”

“One of the things we’re all very aware of is what we call the gold diggers — someone coming in not really looking for a deal, just looking for the PR,” said Mark Cuban on Friday’s episode of “Shark Tank.”

What the sharks couldn’t agree on, though, is whether the term applies to Ryan Shell, chief executive of The Home T.

Shell sells T-shirts, mostly online, bearing the image of a state, or even country, with the word “Home” printed on it. As a North Carolina native living in New York City, he said the image resonated with him personally.

“I miss the people, the accents, the sweet tea, and don’t even get me started on the barbecue,” he said. “Simply put, home is a place that makes you happy.”

Apparently, the image resonated with other folks, too.

After enduring the typical shark snark when he requested $250,000 for a mere 5% stake in the company, Shell said his one-man operation made $1.1 million in revenue in its first year.

“Well, you just shut me up,” Robert Herjavec quipped.

But — surprise, surprise — none of the sharks actually shut up.

And yet — $1.1 million in just one year? It was enough to keep most sharks sniffing.

Shell said grassroots marketing has been key to his success, that he’s spent less than $5,000 advertising on Facebook and that he saw big bumps in sales when celebrities like Hillary Duff and “Breaking Bad’s” Bryan Cranston were photographed wearing Home Ts.

But nobody liked his $5 million self valuation.

“Have you ever seen us take a deal for 5%?” asked Daymond. Shell said the figure was intended as a starting point for negotiations. But the FUBU founder thought he had a gold digger on his hands.

“Coming in here at 5%, you didn’t really want a deal, I don’t believe,” Daymond said, noting that Shell’s background is in the marketing industry.

Mark, despite going out, disagreed.

“I don’t think you’re a gold digger,” he said. “I think there are reasons for you to be here.”

He also stuck up for Shell when the offers started. Robert offered the $250,000 for 35% of the company and Lori Greiner came in with the same amount for 30%.

A perplexed-looking Shell noted that both offers value his company as worth less money than he made in a single year.

Mark cheered him on: “You didn’t walk out here to be stupid. You’re smart, Ryan. Stick to your guns.”

He turned down both offers and was walking off of the set when Daymond dramatically jumped back in, offering him $250,000 for 20% of the company.

“You didn’t want a deal, then, like I thought,” Daymond said.

Mark, again, to the rescue: “He would be the moron of the century if he sold $1 million in sales at a million-dollar valuation.”

For his part, Shell maintained all along that he really wanted a deal to help him grow his company.

“That went much different than I thought,” he said after leaving the tank. “Maybe I should have come in higher than 5%. Maybe I just completely screwed that up. I don’t know.”

Also Friday, Kevin showed that nobody’s immune to the Mr. Wonderful mean treatment, when he insulted 14-year-old Brooke Martin’s iCPooch, a stand that lets owners use a tablet to video chat and share a treat with their dogs while they’re away.

“I hate this very much as an idea … very much,” said Kevin, who, among other complaints, fixated briefly on whether dogs would think the plastic stand is a fire hydrant and pee on it.

iCPooch didn’t get a deal. But the sharks were kinder to another junior entrepreneur, 9-year-old Mikaila Ulmer from Austin, Texas.

Her BeeSweet Lemonade, made with honey and flaxseed, got a $60,000 deal from Daymond in exchange for 25% equity, contingent upon whether some convenience-store partners of his are able to get the product on shelves.

And age remained a hot topic when 26-year-old Patrick Ambron walked away from a $2 million offer from Robert for 25% of BrandYourself, an online-reputation management company.

(Of course, it helps when you’ve already been listed among the Top 100 Young Startups by the White House and named one of Inc. magazine’s Top 35 Entrepreneurs Under 35.)

“Hey,” a smiling Robert said, “At that age, to turn down two million bucks? That takes guts.”

For more related information, visit NerdWallet’s resources on how to start a business. For free, personalized answers to questions about starting and financing your business, visit the Small Business section of NerdWallet’s Ask an Advisor page.