For many Americans, smartphones have become much more than just phones. We use them throughout the day to check Facebook, get directions, watch videos, take photos, listen to music, order food and to do our banking.

There are now some 377 million wireless subscriber connections in the U.S., according to CTIA-The Wireless Association. Because many of us have multiple devices, that works out to about 56 million more connections than there are individual Americans.

More people are relying on cell phones as their main portal to the internet: 64% of U.S. adults own a smartphone and 10% have no other way of getting online, according to a 2015 Pew Research Center survey. And the Wireless Association notes that nearly half of U.S. households have wireless connections only.

NerdWallet set out to identify the nation’s top mobile-friendly cities in the 50 most populous locations. Our list includes the cities where customers are most likely to get the best connection and in-person customer service. The 10 best cities accommodate users with specially designed mobile websites.

Bigger doesn’t mean better. Of the top 10 U.S. cities by population, only Chicago, Houston and San Diego made our top 10 list for mobile friendliness. Chicago, the third-most populous city in the U.S. at 2.72 million, is the biggest to make the top 10. New York, the nation’s largest city with a population of 8.4 million, came in at No. 11 on our list. Los Angeles, the nation’s second-most populous city, is No. 25 in our analysis.

California dominates the top 10. The Golden State’s cities make up eight of the top 50 most populous U.S. cities, and half of those cities are in our top 10. Northern and Southern California are represented equally.

Customer service counts. A few of our top 10 mobile-friendly cities made up for lower performance in speed and coverage with stronger scores on key metrics such as the number of mobile phone sales and service centers per 10,000 people. By this measure, Atlanta, Sacramento and San Francisco did especially well.

Cities are joining the mobile revolution. The mobile-friendliness of a city’s website can show just how well the city government has moved to accommodate wireless adoption — all of our top 10 cities scored well here, with many launching wireless initiatives for residents. Mobile-adapted websites make it easier for residents to, say, pay a parking ticket, submit a service request through 311 or apply for city jobs from their wireless devices.

Georgia’s largest city and capital tops the list when it comes to mobile friendliness. The city ranked near the top in all of our metrics — it was No. 2 in carrier network coverage among all 50 cities we measured, and third for customer service, with 8.40 mobile phone stores for every 10,000 residents. It also has the second-lowest wireless tax rate — federal, state and local taxes combined — of the top 10 cities.

Upload speed and coverage are good in San Diego even though the city lags behind other top cities on these measures and on download speed. What elevated this city: an easy-to-use mobile site, which was redesigned in March 2016, and its density of mobile phone stores.

California’s capital ranks between Atlanta and San Diego for performance and is home to 6.86 mobile phone store branches for every 10,000 people. The city’s information technology department focused on mobile-readiness from 2013 to 2015 by redesigning its website and creating a suite of mobile apps for public services.

Washington’s biggest city excels in upload speed and download speed, ranking in the top five for each, and it had the best carrier network coverage among the cities analyzed. The city’s Information Technology office features mobile apps that cater to specific city services. Seattle also offers discounted smartphones to low-income residents. The city would have ranked higher on our list had it not been home to the nation’s highest wireless tax rate (25.15%), which includes national, state and local wireless taxes and fees. Compared with other cities, Seattle has a relatively low density of mobile phone stores.

With a population of 2.72 million, the Windy City is the largest city to make the top 10. Chicago scores big in performance — in the 50-city list, it ranks at No. 2 for upload speed, No. 4 for download speed and No. 6 for coverage — but it lags behind other cities because of higher wireless taxes and a lower density of mobile phone stores. The city’s website is mobile-friendly, and users have access to free Wi-Fi hotspots, called Wireless Internet Zones, when they are on the go.

The largest city in Texas ranks 16th on our list for network coverage, but it makes up for that in customer service, with 4.71 mobile phone stores per 10,000 residents, which is above the average of 3.83 stores per 10,000 residents in all 50 cities. The city website offers a range of services that can be accessed by smartphone — such as reporting a pothole, paying for a parking ticket or applying for city jobs.

The second Southern California city in the top 10 comes in at No. 7, and while many of its numbers are lower than those for other top cities, it boasts the sixth-fastest download speed of all 50 cities. Long Beach’s Department of Technology and Innovation recently updated the city’s website and provides free Wi-Fi in several local parks.

The City by the Bay is the fourth California city to make the top 10. In terms of performance, San Francisco’s upload and download speeds and coverage come in lower on the list, but it has 6.02 mobile phone stores per 10,000 residents — this is the fifth-highest concentration of branches of all 50 cities. Apart from its mobile-ready city site, San Francisco’s wireless initiatives include #SFWiFi, which provides free Wi-Fi in 32 parks and public places in the city.

This city scores well on performance and coverage, and has the third-lowest wireless taxes of all 50 cities. The city also has redesigned its website for mobile users. Virginia Beach earns its No. 9 spot for customer service, with 2.77 mobile phone stores per 10,000 residents, which is the fewest stores for a city in the top 10.

Austin, aided by Google Fiber Community Connections, ranks faster in upload speeds than many other of the 50 cities. The capital of Texas is home to an average wireless tax rate, but it’s No. 8 for all cities in the number mobile phone stores (4.6 per 10,000 residents). 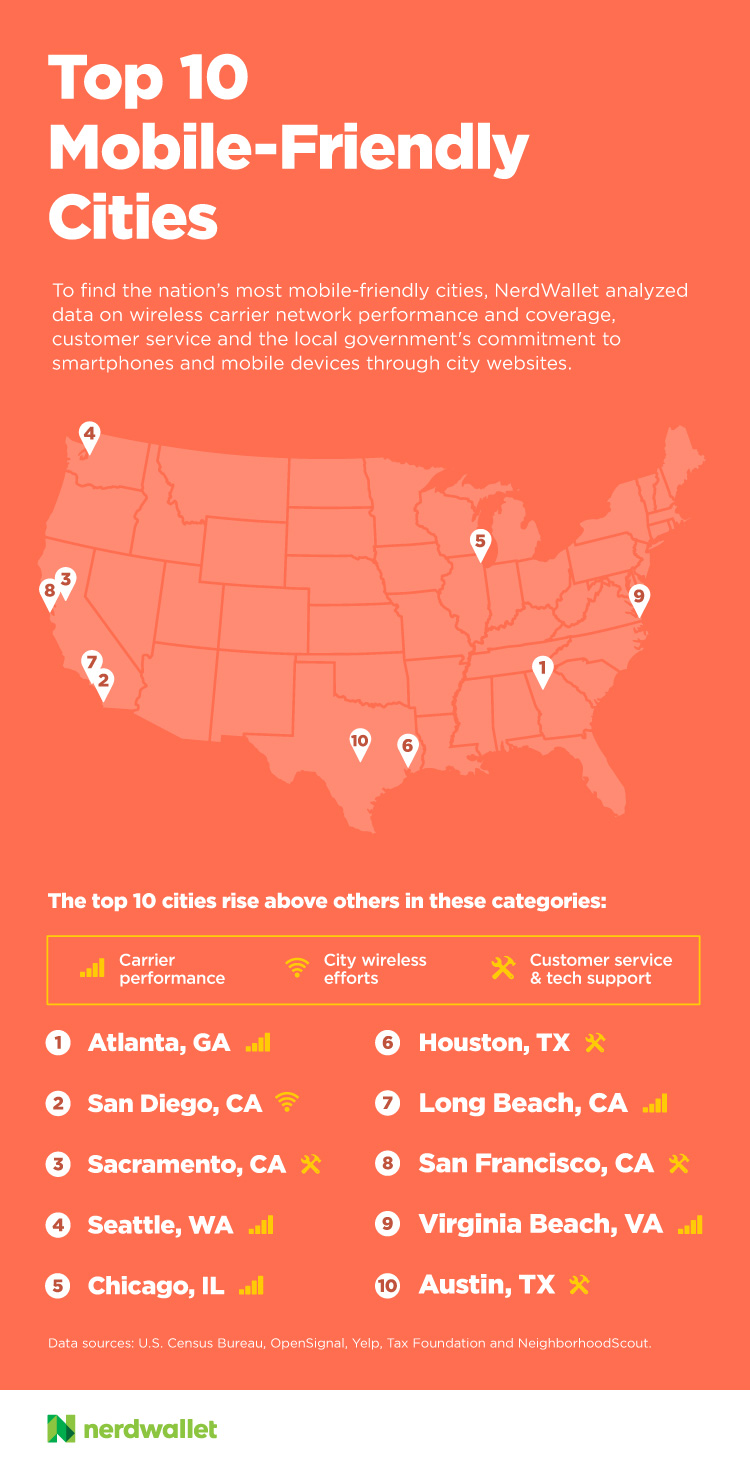 Scroll through the table below to see the data on the nation’s 50 most-populous cities.

We analyzed data from the 50 most populous cities in the U.S. as determined in 2014 by the U.S. Census Bureau. We calculated overall scores using four measures:

Performance. Upload and download speed were measured in megabits per second (mbps) to determine the speed of 2G, 3G and 4G carrier networks in every city, and are each 10% of the score. Coverage was measured by availability of carrier networks in a city, and is shown as a percentage above the national average of 81%. This is 20% of the score. Data, current as of June 2016, was obtained from OpenSignal.

Crime risk. We calculated an overall crime risk to determine how safe residents can feel when using their mobile devices in public places. The rating for each city was determined with proprietary data from NeighborhoodScout. We used the data to categorize each city as “most safe,” “safe,” “less safe”  and “least safe” for 10% of the score.