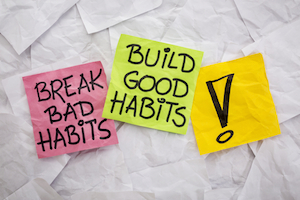 Let’s face it: Shaking off bad habits is tough. Most people don’t like change, especially when a new routine requires self-discipline and attention to detail.

For instance, transitioning from credit-card junkie to responsible plastic user is difficult. And, unfortunately, it looks like a lot of Americans are backsliding into one bad credit card habit – carrying debt. Not sure what’s going on, or how to keep from falling in line with this trend? Take a look at the details below for more information.

Before looking at the resurgence of credit card debt levels in the United States, let’s take a moment to reflect on the recent past, especially our financial behaviors surrounding the recession that began in 2008.

In the years leading up to the economic downturn, Americans can most aptly be described as swipe-happy. And who could blame us? Interest rates were low, and credit was easy to come by. Between January 2006 and January 2009, average indebted household credit card debt steadily rose, hitting a shocking $19,000 in January 2009. After that, indebtedness took a steep drop. The recession was in full swing, which caused credit to tighten up, defaults to ris, and Americans to start watching their pennies.

Benefits to bucking the debt trend

Although many economists interpret growing credit card debt levels as a sign that consumers are more confident about buying and spending, it’s important to recognize that there are individual benefits to bucking this trend. In other words, if you gritted your teeth and paid down your debt during the recession, there are good reasons not to backslide.

For one thing, credit card debt is expensive. As of September 2014, the average credit card interest rate is hovering around 15%. For the millions of Americans carrying thousands in debt, those finance charges are adding up fast.

Also, credit card debt can do damage to your credit score. If you’re utilizing more than 30% of the available credit on your cards, you’re hurting the 30% of your credit score that’s determined by amounts owed. Again, the folks racking up thousands in debt are very likely exceeding this threshold – and dinging their credit as a result.

How to hold on to new and improved plastic habits

Hopefully you’re now convinced that slipping back into the “buy now, pay sometime” mindset of the pre-recession years is a bad idea. But if you’ve been successful at re-tooling your credit card habits, how can you make them stick? The Nerds have a few ideas:

The bottom line: Americans are getting more comfortable with charging up their credit cards again, but you don’t have to be one of them. Keep the Nerds’ tips in mind to keep from backsliding into bad credit card habits!