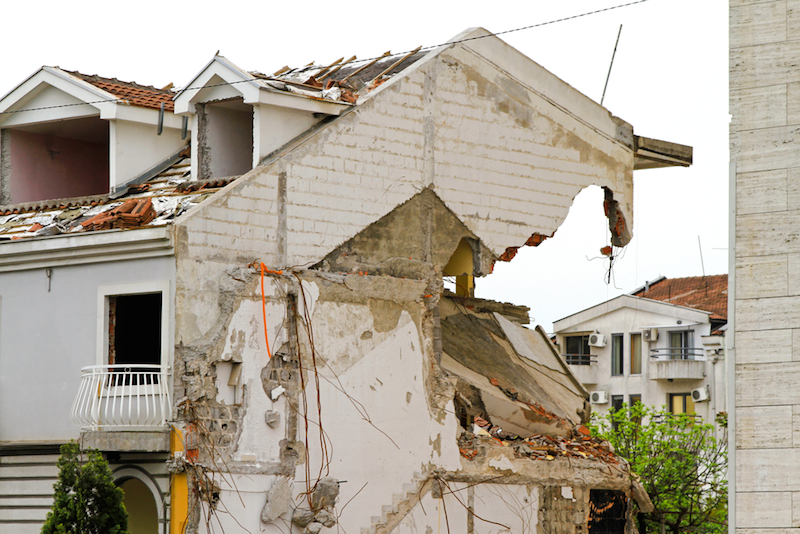 Homeowners insurance is vitally important, but after the recent earthquake in Northern California — where officials estimate losses could exceed $1 billion — homeowners might want to think about getting more coverage to protect their investment. Earthquake insurance is a policy or endorsement, separate from standard homeowners insurance, which many Americans need to be adequately protected. What do you need to know before signing up? NerdWallet contacted the experts to find out.

Californians live with a high risk of earthquakes — but they’re not the only ones. According to a recent report by the U.S. Geological Survey, 16 states are at a high risk for earthquakes and most of the rest of the nation also faces some risk.

“People should have insurance if they’re in the vicinity of earthquake activity,” said Scott Burns, professor of geology at Oregon’s Portland State University. “Western Washington, Western Oregon, most of California, Nevada and Utah are the most probable places. In the central and eastern parts of the country, it’s more unpredictable, but some of these states, like Illinois and South Carolina, have also experienced earthquakes.”

And you can’t depend on a lot of financial help from the government in the event of the Big One. “Usually state and federal disaster systems have specific criteria for emergency funds,” said Xiaoying Xie, a professor of finance at California State University-Fullerton. “They’re not always available to everybody. They may not have enough funds, and it takes longer for money to be available.”

2. Be careful where you buy it

Just in case, consumers should also understand their insurer’s obligations to them if the company runs out of money.

Many Californians purchase their earthquake coverage through the California Earthquake Authority, or CEA. Xie said the insurer is in a strong financial position. However, if the CEA does run out of money to pay claims, “then homeowners may only receive a proportion of the loss payment, or might receive their money in installments,” she said.

3. Coverage can be expensive

Just like your homeowners’ insurance premium, your earthquake premium will be based on your level of risk. This can depend on geography — California’s premiums are much higher than Virginia’s, for example — as well as other factors, like your home’s construction.

“A masonry home is typically more expensive to insure than a frame home,” said Chris Hackett, director of personal lines policy for the Property and Casualty Insurers Association of America. “In general, frame construction is better able to withstand damage from an earthquake.”

Burns adds that older houses, built before earthquake codes, are charged higher premiums — or might be rejected for coverage. “In order to get insurance, sometimes people will need to get their house retrofitted,” he said. This can represent a large upfront cost, though it will protect owners in the event of a disaster.

Policyholders also have other cheaper ways to prevent earthquake damage. “Minimize your risk of loss by securing bookshelves and other items that may fall during an earthquake,” Hackett said.

Even after you’re covered, you’ll still need a (sizable) emergency fund. Unlike those who have homeowners insurance deductibles, earthquake insurance deductibles are a percentage of your policy limit. “Usually deductibles range from 10-20%. The typical CEA policy has a 15% deductible,” Xie said. At 15%, owners of a $200,000 house would pay $30,000 for repairs before seeing a check.

4. Your coverage needs will be different

Earthquake policies typically include a personal property benefit, which can help homeowners replace belongings that are destroyed in a disaster. But those familiar with the personal property allowances in homeowners policies should still be careful. “The limit for personal property coverage under an earthquake endorsement or policy is usually lower than what is provided for under the homeowner policy,” Hackett said.

This doesn’t necessarily mean homeowners are on the hook for more of the bill. After all, earthquakes are unlikely to damage some kinds of property — like clothes — that could be lost in a flood or a fire.

Still, policyholders should weigh their personal property limits against their probable needs. “You may be able to purchase additional contents coverage for earthquake damage for a higher premium,” Hackett said.

Should you buy earthquake insurance?

That depends. But homeowners should be aware that most states are at some risk for earthquakes and damage is often expensive. California’s 1994 Northridge earthquake caused about $44 billion in property damage, with only about half of that insured.

Despite history — and geologists’ predictions — relatively few homeowners are protected against earthquakes. “Only about 10-11% of California homeowners carry earthquake coverage on their homes,” Hackett said.

Not everyone is unconcerned, though. “I’m a geologist and I live in earthquake country, and I have earthquake insurance on my house,” Burns said.

Homeowners who are interested in coverage should start by doing their research. Burns recommends homeowners consult earthquake hazard maps for their state. Xie advocates having your property’s earthquake damage risk assessed by a qualified contractor or engineer. “You also have to consider your own financial situation,” she said. “If you can’t afford to pay for likely damages on your own, you should choose insurance.”