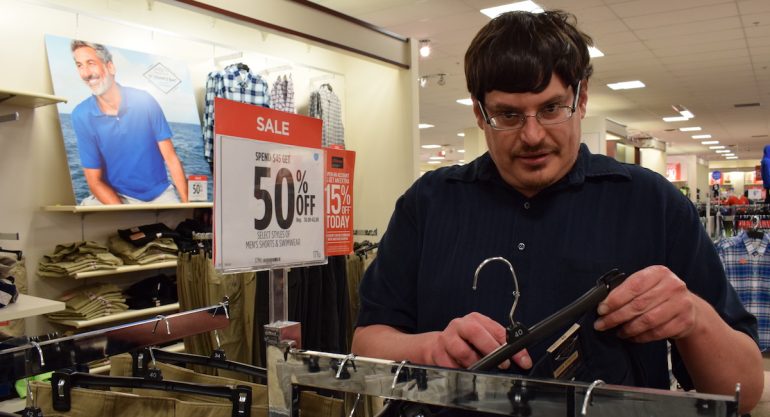 Social worker David Lynch recalls hearing a radio commercial a few years ago from a company that promised student loan forgiveness for people like him employed by nonprofits.

Lynch, 39, decided to check on the company’s credentials. “I did try to do a Google search,” he says, “but there really weren’t any warnings.”

Lynch says the friendly telemarketer at Broadsword Student Advantage LLC told him that he couldn’t get his debts of about $30,000 forgiven. But he says he was told that by switching his loan payments to Broadsword and adding a $100 monthly fee, he’d save money once the company refinanced his debts — and never have to worry again.

But some companies that claim to adjust student loans lure borrowers with offers too good to add up. It can seem terrific to stop paying a loan-servicing company and instead pay half the monthly amount to a debt adjuster — until a customer realizes that the adjuster is pocketing the money instead of keeping loans current and refinancing them.

Borrowers served by Broadsword ended up worse off, according to the Illinois attorney general, who sued the Texas company in 2014.

The suit, still underway, says Broadsword offered to cut student loan payments in half and exaggerated claims that public-service workers could get debt forgiveness. It accuses Broadsword of charging financially distressed borrowers for services available for free and placing consumers “at greater risk of serious financial harm.”

Broadsword and its owner, Kenneth Talbert, provided “nothing more than phantom help,” secretly channeling customers’ fees to a sister investment-advisory company, the suit says. Broadsword got customers to grant power of attorney and to divulge loan-account passwords and IDs, the attorney general said, limiting communications between borrowers and debt servicers.

“They strung me along for six months, but nothing was ever done,” said Lynch, who recalls paying Broadsword more than $300 upfront. “One of my loans went into default because they told me they had it taken care of, but they didn’t.

“I will never use any service like that again.”

Talbert denies the allegations by Illinois Attorney General Lisa Madigan, who accused him of failing to get a debt-settlement license. He tried to get the suit thrown out.

During an interview, Talbert declined to comment on individual customers. But he blasted the attorney general, a leader in targeting student loan companies, accusing her of filing the suit to enhance her re-election chances.

“It’s amazing how government puts its nose out there and takes down an industry,” Talbert said. He said Broadsword never engaged in debt settlement and merely filled out application forms for customers.

Lynch lives in New Hampshire’s White Mountains. He’s a Colorado College graduate with a master’s degree from the University of Michigan. He counsels children struggling with severe mental health afflictions.

Lynch says his loans were a mess when he called Broadsword, which split them into multiple accounts he didn’t know about.

After severing relations with the company, Lynch says he contacted the U.S. Education Department. The agency helped unsnarl his accounts for free, and put him on an income-based payment plan.

Now Lynch pays enough each month to keep his balance level. He expects his education debt to prevent him from ever buying a house — a growing national predicament, according to recent research by the Federal Reserve Bank of New York.

“You’ve got a whole lot of people like me in this situation who really don’t make much to begin with,” Lynch says. “I’ll keep paying what I have to pay every month. Then I’ll die one day, and then the joke’s on them.”

She suspected the deal was too good to be true.

Indeed, she says, it was.

First American performed none of those services, according to a suit filed in 2014 by Illinois’ state prosecutors. Attorney General Madigan accused the company and its owner, Gustavo Montes, of offering access to a fictitious “Obama Forgiveness Program” often ballyhooed on the web.

Madigan alleged that First American used high-pressure sales tactics, falsely claimed Education Department affiliation and charged upfront fees between $700 and $1,200. She accused the defendants of doing little more than completing federal loan-consolidation applications that consumers could fill out themselves for free.

Taylor-Little, 54, a Lewis University alumna, earned graduate degrees in nursing and health care administration from the University of Phoenix. She declines to disclose her loan amounts but says they’re substantial.

She recalls the First American representative she reached by phone. “It was convincing to me,” Taylor-Little said. “The lady was really nice and had a positive voice and enthusiasm.”

Taylor-Little says she was excited by the prospect of qualifying for loan forgiveness available to nurses, teachers and other public-service workers. She says she paid First American an amount equal to one-tenth of her loan balance and committed to monthly fees.

Taylor-Little says her daughter signed up, too. They got no results, the mom says.

In 2015, a Cook County judge issued a consent decree banning Montes and his employees from the student loan and debt-settlement businesses in Illinois. In the document signed by his lawyers, Montes denied liability and agreed his company would pay $40,000 in restitution.

The decree lists Taylor-Little as due for a refund of $781.77. She doesn’t recall receiving money.

The veteran nurse says she’s jobless after a corporate downsizing.

Applying to employers is difficult because, she says, “they check credit.”

Chrissy Cate boards and trains quarter horses, Tennessee walkers and paint horses on her family farm in Oregon’s lush Willamette Valley. She and her husband, who is disabled, are raising three children.

As the main breadwinner, Cate works full time at the U.S. Bureau of Land Management, helping to prepare timber sales.

In 2014, Cate, 38, sought to consolidate loans she took out to attend Oregon State University’s College of Forestry and to earn a graduate degree in rangeland management.

She filled out a form on a web page offering student loan help. “All of a sudden,” she says, “someone was calling me.”

Not only calling, she says, but assessing an upfront fee. “They charged me just to send me the paperwork,” Cate said.

But she decided not to go forward with the company after talking to friends. “They said, ‘Why don’t you go through the Department of Education? This company doesn’t sound very good.’”

Cate called back Debt Relief Pros. But she says the company refused to cancel her charges because the transaction had already been processed. She checked with a lawyer. He told her that upfront fees were illegal.

She lodged a complaint with the attorney general’s financial fraud and consumer protection unit. Her filing and others enabled Oregon authorities to act.

In 2015, without admitting he broke a law, Wordell signed a court-approved assurance of voluntary compliance agreement. Wordell and his company paid $5,000 and agreed to refund 22 consumers. He agreed never again to offer or provide debt-management services in Oregon.

Yet, as often happens, the enforcement actions by Oregon and Washington left the company free to conduct business in every other state.

Cate says she got her money back after disputing the charges through her credit card company.

She applied to the Education Department as a public servant and reduced her monthly loan payments to $69 a month — versus about $200 monthly that she says Debt Relief Pros told her she’d have to pay.

Cate has about nine years of payments to go. She advises people considering debt-relief offers to conduct careful research and to avoid being pressured to make immediate decisions.