The Atlantic in 2014 declared that the “most hipster thing” you can do is move to Des Moines, Iowa.

As one of the fastest-growing cities in the Midwest, Iowa’s capital is still where many of the cool kids — and techies — are heading. (Facebook and Microsoft both have data centers there.)

To explore what it’s like to settle there, we talked with Lindsey Beard, a 25-year-old training development specialist, about moving to Des Moines a few years ago and buying her first home there this year. We also asked her real estate agent, Paul Walter, to share homebuying tips. (This transcript was lightly edited for clarity and length.) 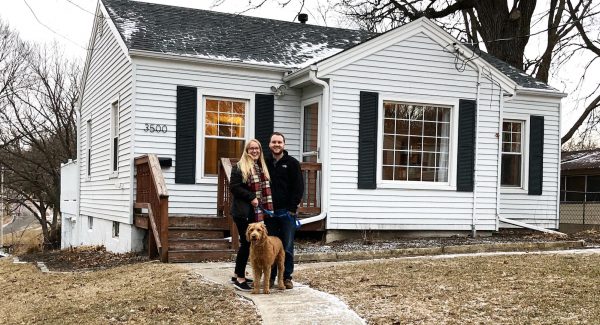 Lindsey Beard and her boyfriend, Nick, live in the three-bedroom home she purchased in Des Moines earlier this year.

What brought you to Des Moines?

I was born and raised in the Midwest. I grew up in the Quad Cities and went to the University of Northern Iowa for undergrad. I moved to Des Moines in 2015 from Cedar Falls, about two hours away, to work at John Deere.

Why did you decide to buy a home in Des Moines?

I didn’t start thinking about [buying] until a year ago when I realized that if I stayed within a certain price range, I’d be able to pay less for a mortgage than rent. Once I knew I was going to settle down in Des Moines, it was an economically smart decision to make. It’s nice knowing the money is going toward something.

I wanted an older house, something with character and charm. My boyfriend Nick and I were moving in together, so we wanted two bedrooms and two baths, an unfinished basement for his “man cave,” and a fenced backyard because we have a dog. We also wanted a big deck.

I drove through a lot of neighborhoods and drilled it down to the Beaverdale area, which is known for old, timeless brick houses and lots of trees and families.

Six months before our lease ended, I started looking at houses. I probably inquired about 10 to 15 houses in those six months, knowing I wasn’t going to buy yet.

We looked at one in Beaverdale which I thought for sure would be the one, but it didn’t feel right when we were touring it. Nick and I were excited about the next one we looked at. It had three bedrooms, two bathrooms, a basement and wooden floors.

We looked at two more, but I couldn’t stop thinking about that one, so we walked through it one more time. I put in an offer on January 21, 2018. I was bidding against two other couples, which was stressful. I went $2,500 over asking price and had to give $1,000 in earnest money. We moved in mid-February.

I love old wooden floors; they were restored and original to the property. The windows are huge and let in a lot of natural light, which I loved. The overall layout of the house is nice. It had a big, beautiful deck out back. But the best thing about the house is that the major items that would eventually need to be replaced — the roof, concrete slabs for the driveway, windows and plumbing — were all new and updated. 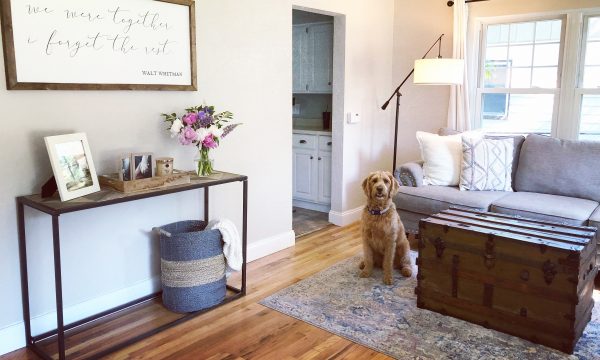 My big thing was figuring out how much I could spend on a home, which narrowed down the neighborhoods. I wanted to stay under $200,000 and ended up paying $162,000. We used the leftover money for furniture and home improvements.

I had been saving for a while, but especially in the last six months before my lease ended. I had a set amount transferred to savings from each paycheck right away and took leftover money from each pay period and put it toward my down payment. I also chose to buy right after I got a work bonus and tax return money.

I got a lot of guidance from my mom. She’s the main reason why I started saving so early to buy. She was upfront with me about expectations and challenges, and the biggest one she told me was that a lot can go wrong between putting down an offer and closing.

Now [my boyfriend] Nick lives with me and pays me rent. We’re able to split all bills like utilities and internet. We don’t have combined accounts, but we know our budget and what we expect to pay every month. We don’t go out to eat as much now that we have our own kitchen and make our own meals.

There were a lot of moving costs I didn’t anticipate: getting the locks changed, buying stuff for the house and replacing curtains left by the previous owner that were covered in black cat hair. Unexpected things come up, so you have to be financially ready to take that on.

I love my house and I know I made the right decision, but I should have looked a bit more just to solidify that decision.

What advice would you give to someone considering moving to Des Moines?

It’s a really good place to buy a starter home. The housing market is hot right now, so you have to act quickly. If you don’t jump on an opportunity, you’re not going to get it.

We spoke with Paul Walter, the real estate agent who helped Beard find her home, about the housing market in Des Moines and what first-time home buyers need to know.

Have your financing lined up. Des Moines is a seller’s market right now, so get your financials ready before you even start to look. “Some of these houses have five offers or more at once. You won’t win a multiple-offer situation if you don’t have a preapproval letter attached to your offer,” Walter says.

You don’t have to put down 20%. The traditional 20% down payment isn’t required for Des Moines. “You can get away with 3% or 3.5% — or even no down payment for some of the rural communities,” he says.

Beaverdale and Waukee are great areas for buyers who are looking for a home for less than $250,000.

If possible, opt for a shorter inspection period. It’s one way to stand out in a seller’s market. “Sellers want short inspection periods. Ten calendar days is better than 10 business days,” Walter says.

No matter what your savings goal is — a new business, a house, a wedding or big trip — NerdWallet can get you there faster. Sign up for free to see how.