“Portlandia” jokes aside, Portland, Oregon, has a lot going for it besides hipsterdom. It has microbreweries, a strong cycling culture, lush parks and more.

The city’s appeal was never lost on Portland natives Conners McMenamin, a restaurant manager, and his wife, Kayla, a public health researcher. Although the couple had lived in other cities — Kayla moved to Austin, Texas, for her master’s degree and then they lived together in Seattle — they always planned to end up back in their hometown someday.

However, their journey to homeownership in Portland came with unexpected challenges, like being outbid several times and discovering an unpleasant surprise after moving in. Here’s what the couple learned from buying their first home. 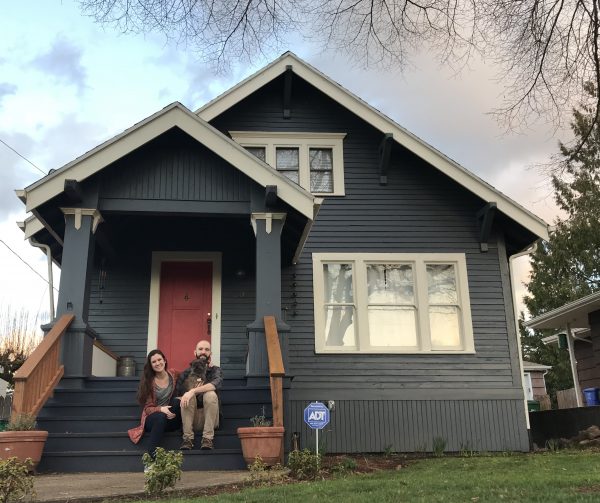 Kayla and Conners learned from their experience buying their first home, including the importance of being willing to compromise.

What brought you to Portland?

Kayla: We’re originally from Portland, and it was always the plan to get back there eventually. I wanted to spend time in other cities but knew we would put down roots there.

Conners: Portland is the perfect-sized city, and people are so friendly. Family played a big role as well. My sister’s having a baby, and we wanted to be there for that.

Why did you decide to buy a home in Portland?

Conners: We went back and forth on it, but I’ve always liked the idea of buying a home. The market was really hot, and people say not to buy when it’s hot, but we just wanted to be in a house and not pay rent anymore.

Kayla: Conners was more confident about the house buying process than I was. I’m more hesitant with big life moves. We actually started looking when we were living in Seattle and thought we wouldn’t move until we had a house locked down.

Kayla: There are a lot of surrounding suburbs that are easier to find a house in, but we both agreed to be in Portland proper. We both wanted an older house. I grew up in my grandparents’ beautiful 1910 house in Forest Grove, and I loved the creaky old floors and cozy feel. Conners’ family’s restaurants are also restored older buildings. At the same time, we wanted something that didn’t require so much work that it would overwhelm us as first-time buyers.

Conners: The eastside of Portland has older homes, so we were attracted to that area. I’ve always played around with the idea of a project house — something I could build and put love into. But when it came down it, we realized that we could find something we could be comfortable in and still have projects. In terms of rooms, we were set on two or three [bed]rooms to allow for future growth as a family.

Kayla: We started looking in the early spring of 2017, closed in May and moved into the home in June. We ended up putting in offers for eight different houses — almost one every weekend — over the course of two to three months. Our range ($300-$400K) rose after a few months of looking. In Portland, if a home was listed within our range, we knew it was probably going to be a bidding war.

Conners: We were in Seattle and driving down to Portland on the weekends. The market was so hot that there wasn’t a way for both of us to walk through all the houses, so we would tag-team it. Kayla would go down and then I would go down, and sometimes our parents would look for us. It was way harder than I thought it would be. Old Portland bungalows were flipping like mad, and I assume they still are. It became a frustrating experience at times. You had to add 15%-20% to the price you saw on Zillow or Redfin. We ended up blowing our budget range out of the water and found one for $465K.

Kayla: Every offer was like throwing darts. We would find out that we were one of 20 offers and not even near the top of the list. After each rejection, I was like, “We need to take a break.” But then we saw new homes go up on Redfin and we’d be driving down to Portland again. We were so lucky to have our Realtor, who was a family friend, and supportive parents. We always had someone to go to about mortgages and offers. It would be intimidating to go through this process without a support system.

How did you know it was the one for you?

Conners: My mom and sister walked through the house for us and told us to see it. It had architectural features that are typical in old bungalows, like old columns and nice woodworking. Kayla was still working, so I drove down on a Monday and walked through it with the Realtor. I liked the old bungalow feel and look, and the ceilings were tall enough for me! (I’m 6’4″.) The downstairs had an unfinished basement, and that was my dream. I had a project I could work on, but the entire house above it was livable. It did lack a few things; it didn’t have a fireplace and only had one bathroom, but we can fix that in the future.

Kayla: I saw a lot of photos and videos of it. It was built in 1913 and has a lot of history. I know open floor plans are popular, but ours is sectioned and we have a formal entryway. It had the feel that I was looking for, which is similar to my grandparents’ house.

Conners: We’re technically downtown but in a tree-lined neighborhood. I love that we can step outside of our door and take a quick walk to restaurants or the movie theater. 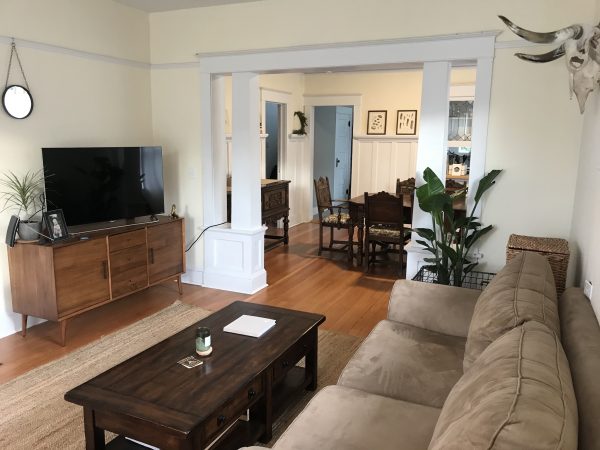 They loved their home’s architectural features, including the columns, high ceilings and quality woodwork.

What’s your approach to finances, and how did you save for the home?

Kayla: I think we’re both spenders. I had student loans from getting a bachelor’s and master’s degree. Conners’ savings allowed us to be able to do this. We’re not so thrifty that we don’t do things we enjoy. We are willing to spend money if it gets us what we want.

Conners: I’ve always lived in a way of not wanting to worry about money. Kayla spends more day-to-day, and I won’t spend for a month but then I’ll see a cool piece of furniture and have to have it. We always sit down as a couple and talk about budgeting, but we want to live the life we want to live. We’ve been fortunate to chase down some good jobs and have been OK.

Conners: The monthly payment wasn’t the problem; it was the upfront down payment. There was internal stress about paying the 20%.

Kayla: We definitely looked at our bank account and asked, “Can we do this?” Again, our support system was great and we weren’t going to drown, but you don’t always have that option and you don’t want to use it if you can help it.

Would you have done anything differently?

Kayla: We had a special situation where the people we bought from asked to rent it back so they could finish closing, and we agreed. The sellers were here for a month after we closed. Our parents and the Realtor drew up our terms, but we weren’t explicit about having them wipe it down or remove all furniture. We opened the door and they had left garbage and furniture. We should have put in the contract exactly what we expected, but nobody could have guessed that would happen.

Conners: It was upsetting. I think we also could have reduced stress if we really talked about our budget and had been more set on the price range.

What advice would you give to someone looking for a home?

Kayla: If you’re looking remotely like we were, make sure one of you has a job offer letter. I was going through the interview process as we were closing on the house. I got the job but it was a week too late, so I’m listed on the mortgage but didn’t have financial responsibility because I was a week too late in confirming employment in Oregon.

Conners: Be willing to compromise. I was so set on a fireplace or unfinished basement, which so many places didn’t have. Determine what your hard lines are. If you’re looking in Portland or another competitive market, get to know your Realtor and make sure you’re on the same page. There were a lot of tough conversations with her, but we relied on her a lot.