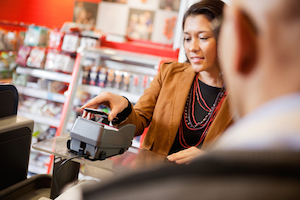 If you’re sick of having to swipe your credit card to buy your daily latte or public transit fare, you’re in luck. There are several exciting developments in credit card payment technology on the horizon that will make paying for your purchases much simpler.

Ready to learn more? Dig into the details below — there’s a lot to look forward to!

Apple is expected to release a mobile payment system

It’s never totally clear what the folks at Apple are up to, but credible sources believe that the company is planning to release a mobile payment system soon. According to a report in USA Today, the Cupertino innovators are hard at work with Visa (and possibly others) to develop a mobile payment system that will operate with its popular iPhone.

If rumors are to be believed, Apple’s new mobile payment system will allow the iPhone to operate in place of a credit card. How it will work remains a mystery – perhaps near field communication (NFC), perhaps Bluetooth, perhaps some other technology altogether.

Meanwhile, security experts are buzzing about how users’ payment information will be stored. According to an article in Apple Insider:

“… Sensitive customer information would likely be stored in an iPhone’s secure enclave, or alternatively in the cloud. Apple has illustrated similar arrangements in numerous patents …”

Multiple reports claim that Apple’s mobile payment system could become available as early as fall 2014. The Nerds are excited to see how things shape up!

The subway is one of the easiest and cheapest ways to get around in New York City, but the process of paying for your ride certainly isn’t streamlined. Currently, you have to pay for your MetroCard at a kiosk, then swipe it to enter the subway platform. Essentially, this is a two-swipe system – one to pay for your MetroCard with your credit or debit card, then another to actually get on the train.

It appears that there are plans in the works to eliminate the need for MetroCards altogether. The online magazine Slate reports that by 2019, MetroCards are expected to be phased out in favor of technology that will allow customers to pay for rides by tapping their payment-enabled smartphones (or perhaps credit cards) at subway entrance points. By eliminating the need to swipe any type of card, it’s expected that this new system will make boarding public transit much smoother.

The Big Apple will have to wait a while for tap-and-pay subway rides to go mainstream, but it seems promising. Plus, there’s always the possibility that what starts in America’s biggest city will become the norm nationwide in short order. This means that public transit customers all over the country could be in for a much better commute within the decade!

Wearable technology is all the rage, and Barclaycard is the latest company to get in on the action. The British credit card issuer is launching a wristband that allows customers to pay for their goods by scanning it over a payment terminal; it uses the same technology that’s embedded in Barclays credit and debit cards, some of which have allowed for contact-less payments since 2007.

Known as “bPay” bands, the wristbands are being distributed at special events hosted by Barclays throughout 2014, and will be released to the general public sometime in 2015. According to a story in The Telegraph:

“Barclaycard plans to make the bands free of charge and will allow them to be used by the majority of UK card users, not just its own customers.”

It doesn’t appear that there are plans for a similar product launch outside of the UK just yet, but the Nerds are hopeful that other credit card issuers will jump on the bandwagon!