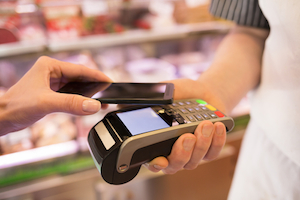 Technology has changed our lives dramatically in the past few decades. Between smartphones, high-speed Internet and 3-D televisions, we’re living in a gadget-saturated world.

But some old standbys are sticking around. For instance, despite the explosion in mobile wallet technology, most Americans are sticking to cash and credit cards. So why aren’t mobile wallets gaining popularity faster? Let’s take a look at the details.

What are mobile wallets?

If you’re not familiar with the concept of a mobile wallet, the name pretty much says it all. Basically, they’re systems that allow users to combine all of the stuff that would normally be carried in a regular wallet – like credit cards, debit cards, store loyalty cards, etc. – onto a mobile device. Usually, this is accomplished using a mobile app.

The idea is that you’ll use your smartphone (or another accompanying gadget) instead of your wallet, since it contains all your payment information. Most people are carrying around their smartphones anyway, so being able to leave our wallets behind is supposed to streamline our day-to-day lives. After all, the fewer things we need to schlep around, the better!

There are lots of mobile wallets to choose from, but they’re not very popular in the U.S.

On the surface, it seems like mobile wallets would be all the rage. But North American consumers just haven’t latched onto them the way entrepreneurs expected. According to an article in the New York Times:

In fact, this lack of interest is one of the reasons that a mobile payments pioneer pulled back on its mobile wallet ambitions. In May 2014, Square removed its Square Wallet app from the App Store and Google Play. Although existing users can still access it, it’s clear that the company was disappointed in its performance.

So why aren’t Americans more excited about mobile wallets? There are a few reasons:

Spotty acceptance – One of the big issues with some mobile wallets is that they aren’t widely accepted in the places people usually shop. In order for some mobile wallet systems to function, both the customer’s phone and the merchant’s terminal have to use compatible technology. This is a big obstacle that few developers have been able to overcome.

Lack of awareness – According to the Times article quoted above, many Americans simply don’t know what mobile wallets are or how they work.

Lack of enthusiasm – Even when people are made aware of the mobile wallet options on the market, many are uninterested. They simply don’t see the benefit to using these devices over their regular wallets. “I don’t see the point,” Elissa Lyons, a 28-year-old teacher in Fairfax, Va., said. “It’s not that hard to just pull out my credit card – plus, you can’t completely leave your wallet at home.”

Want to try a mobile wallet? Here are some options to consider

If you’re interested in trying a mobile wallet despite their lack of popularity, the Nerds have a few suggestions. Each has it’s own benefits and drawbacks, so be sure to consider them before making your choice:

Google Wallet – Google Wallet hit the scene in 2011. To use it, you download the free app, enter the information on all your payment and store loyalty cards, and you’re on your way. One of the best features of Google Wallet is the ease with which you can send money to friends or family using only your Gmail accounts.

However, the major drawback to Google Wallet is that in order to be able to pay for an item in a store with your phone, both your smartphone and the store’s payment terminal have to be compatible with tap-and-pay technology.

Loop – Loop became available in winter 2014. To use it, you purchase a Loop device (fob or smartphone case) from the company, download the free app, and scan in your payment and store loyalty cards. You can then use the fob or smartphone case to pay for your daily purchases, because both work at more than 90% of existing payment terminals. This is the major benefit Loop has over its competitors.

But 90% isn’t 100%. For example, Loop can’t be used to pay at the pump at gas stations because they require that you fully dip your card into the terminal. Once again, this means you can’t leave your wallet behind for good.

Coin – Coin is expected to be released in summer 2014. To use it, you swipe your payment and store loyalty cards into the Coin app, which then communicates via Bluetooth with the Coin device. The Coin device looks like a regular credit card, but it’s able to store up to eight payment and store loyalty cards; you can switch between them by pushing a button on it. Since Coin looks and functions like a regular credit card, it should be usable at any existing payment terminal.

But one downside is that the Coin device will only be able to hold eight cards at a time. Plus, you have to carry around the device and your phone, which doesn’t provide the convenience that a lot of people are looking for.

The takeaway: Mobile wallets might be nifty, but they’re not catching on in the United States in the way they were expected to. If you still want to try one out, consider one of the Nerds’ suggestions above!