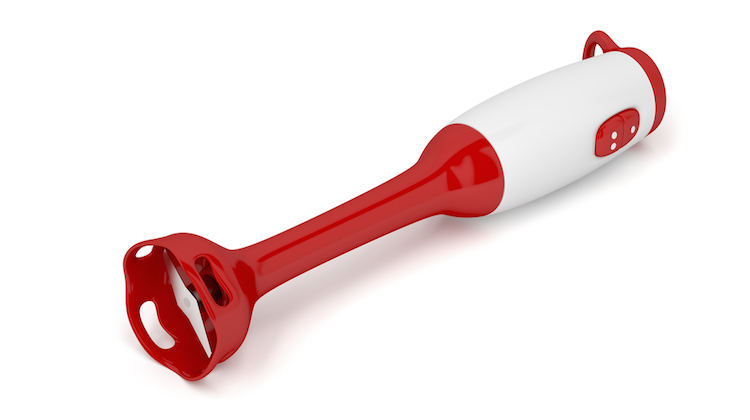 Blenders can be a big help in the kitchen to quickly help you puree soup, make a creamy vinaigrette, tasty smoothie, or mash white or sweet potatoes, but the question quickly becomes which kind of blender should you purchase?  A real blender or an immersion blender?

There are some major differences between an immersion blender and a real blender, such as the Ninja NJ600. For starters, one is hand-held and the other sits on your counter top.

An immersion blender is meant to be held and are made to be lightweight, easy to maneuver and store, according to Consumer Reports.  To use one, simply switch on the on switch and mix ingredients to make salad dressings, salsa, milkshakes, smoothies, and even scramble eggs.  Basically, you bring the blender to the food.

A real blender, like the Ninja NJ600 is also meant to mix up ingredients, turning vegetables into sauces and fruits into smoothies, however, the machine is much larger, more powerful and can do jobs that an immersion blender can’t do.

Clean up is always a chore and when it comes to cooking, but with a real blender, like the Ninja NJ600, you simply need to place the lid, 72-ounce pitcher and blade in the dishwasher. Just be sure to use the top rack for the blade and lid.  While some immersion blender parts are made to be cleaned in the dishwasher, most are designed to be cleaned with soap and water in your sink.

The price of an immersion blender vs. the cost of a blender such as the Ninja NJ600 varies widely. The cost of an immersion blender, on average runs about $50, but can be priced as high as $169. The price of a real blender can also fluctuate depending on the model you choose, but the Ninja NJ600, for example, retails between  $88.96 and $120 with a number of deals available, including a Best Buy coupon code, MOTHERSDAY20 that offers $20 off.