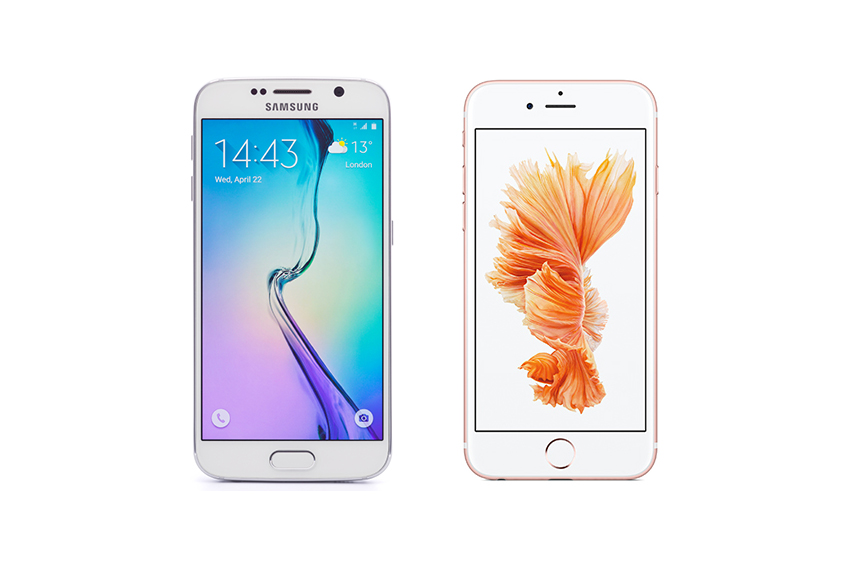 Apple’s newest smartphone, the iPhone 6S, hit stores in late September. On the surface it looks a lot like its predecessor, but with some improvements under the hood. If you’re in the market for a new phone, you might want to rush out and grab one right away.

But not so fast. There are other phones out there that could give the 6S a run for its money, such as Samsung’s Galaxy S6 Edge, which came out in April.

Before you purchase the iPhone 6S, see how it fares in a side-by-side comparison with the Samsung Galaxy S6 Edge.

The phones: Up-close and personal

The iPhone 6S looks pretty much exactly like the iPhone 6, with a 4.7-inch Retina Display. The 6S, however, has 3D Touch capability, allowing users to apply force to their phone to access different views of apps.

The Samsung Galaxy S6 Edge has a slightly larger screen than the iPhone 6S’. It boasts a 5.1-inch Dual Edge Super AMOLED display. Its screen is slightly curved.

And if you notice the dual edge of you Galaxy lighting up, you’re not seeing things. That’s the Edge Lighting feature. It allows you to assign colors to your important contacts — colors that will illuminate when that person calls you.

Under the hood, the iPhone 6S and the Galaxy each comes in several different storage capacities: Apple’s smartphone is available in 16GB, 64GB or 128GB; Samsung’s is offered in 32GB, 64GB or 128GB.

So, they both look slim and sleek on the outside, but what about the features on the inside?

In this selfie crazy day and age, smartphones are only as good as their cameras. The Galaxy S6 Edge features a 16-megapixel rear camera, a 5-megapixel front camera and a convenient double-tap feature that makes taking a picture as easy as two taps of the home button and as quick as 0.7 second. The Samsung phone also includes a 120-degree wide-angle lens, and it can record video at 4K resolution. It also has a bunch of picture-enhancing features built-in, such as one called Beauty Face, which claims to make your selfies a little better looking.

The iPhone 6S brings still photos to life with its Live Photos feature, which is capable of capturing the moments immediately before and after a photo is taken to create a short video. The phone has a 12-megapixel back camera and, like the Galaxy, is capable of recording 4K video. Its front-facing camera is 5 megapixels, and it has a flash.

Phones are made for more than making calls and taking pictures, though. Here’s a look at some of the other things these smartphones can do.

The most compelling functions of the iPhone 6S include:

The Galaxy S6 Edge’s most compelling functions include:

Appearance and features aside, most purchase decisions ultimately come down to price.

To buy the iPhone 6S 16GB outright, you’ll have to pay a starting price of $649. In the iPhone box you’ll find Apple EarPods with remote and mic, a lightning to USB cable and USB power adapter, all in addition to the phone itself.

As for the Samsung Galaxy S6 Edge, prices vary depending on retailer and location. At Sprint, for example, the full retail price starts at $672. At AT&T it’s $719.99, and at Best Buy it’s $819. The phone comes with a wall charger, USB cable, SIM ejector pin, Nano SIM card and headset.

Prices for both phones go up incrementally as storage capacity increases.

So which smartphone is right for you?

With all the buzz around Apple lately, you may want to spring for the iPhone 6S just to get your hands on the newest innovation from the tech giant (and so you don’t feel left out). Make this decision and you’ll enjoy lots of fancy new features that its Android counterpart lacks.

But, if you’d rather be a trendsetter and try out a smartphone with a slightly different look and optimal selfie functionality, we’d recommend the Samsung Galaxy S6.

Regardless of which one you choose, check with your phone carrier for pricing details and payment plans. And if you opt for the iPhone 6S, check out our guide for understanding your payment options.