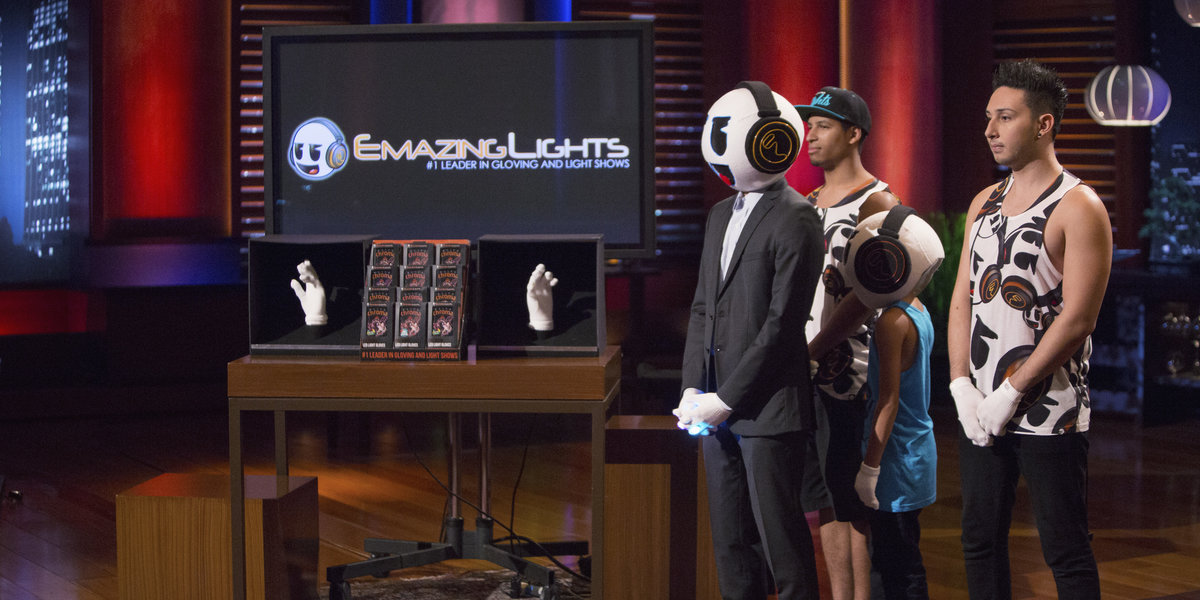 We’ve seen it before: An entrepreneur shows up on “Shark Tank” with a random niche product, offering the sharks a tiny percentage of a company that he or she thinks is worth millions of dollars.

Usually a recipe for a Kevin O’Leary “You’re dead to me,” right?

Well, not this time. On Friday, Brian Lim, chief executive of EmazingLights, was called possibly the best entrepreneur to ever walk onto the show.

EmazingLights makes gloves with fingertips that light up in a patent-pending series of patterns and colors. Lim came up with the idea in 2010, and with $100 started selling the gloves at raves and other dance festivals.

“Gloving,” it turns out, is a thing. Since then, Lim says, it’s branched out from the electronic dance music scene into hip-hop and other styles.

After a quick demonstration, Lim asked the sharks for $650,000 for 5% of the company, which got an immediate, skeptical “Wow” from Daymond John.

The numbers that followed had the sharks saying “wow” in a different tone of voice, though.

Lim said the company has grossed $13 million in about four years and is on target to do $5.5 million in sales this year.

He created a sister company, iHeartRaves, which offers a fuller line of fashion and accessories, and even an International Gloving Championship, a series of regional contests using the gloves which culminates in a final event each year in southern California.

Lim said his inspiration is his parents, who immigrated to the United States from China.

“Growing up and seeing them work 18-hour days really, really hurt me,” Lim said. “It just gave me a strong work ethic. I didn’t want to throw away what they had provided me in terms of an education in the U.S.”

He had an answer for every concern the sharks voiced, and they noticed.

“You are the real deal, man,” said Robert Herjavec. “You are probably one of, if not the best, entrepreneur we’ve ever had here.”

Kevin opened with something of a lowball offer — a $650,000 loan for 3% equity in the companies — which Lim quickly dismissed.

The remaining sharks teamed up in an effort to get their hands on the gloves.

Robert and Lori Greiner went head-to-head with Daymond and Mark Cuban with a flurry of offers.

Lim had said he was more interested in gaining experienced partners than the cash and, in the end, it proved true. He went with Daymond and Mark — passing up bigger bucks for the FUBU founder’s clothing-retail experience and Dallas Mavericks owner Mark’s sports world inroads.

“I’ve gotta tell ya,” Robert said afterward, “I hate losing that one.”

In other action Friday:

Dave Alwan, owner of Echo Valley Meats, came back for his second attempt in the tank.

A year and a half ago, he left with no deal. The sharks told him his mail-order and retail meats and other foods were delicious (Mark said Friday he’s been ordering a cheese spread from the company since Alwan’s first appearance). But his business plan was a mess.

This time, Alwan asked for $150,000 for 20% equity in the company, exactly half what he asked for last time. He also had another number for the sharks: $1.4 million, the amount he said he’s made in mail-order sales.

“You have your numbers down this time,” Daymond noted.

In the end, Alwan, of Peoria, Illinois, agreed to a deal with Mark, who offered $150,000 for 25% of the mail-order business, with an option to buy 25% of the retail business for the same price.

“Because you know I’ll just eat my money’s worth,” Mark said.

AquaVault, a waterproof safe for valuables like smartphones while you’re at the beach or pool, scored $75,000 for 25% from Daymond. And Naja, a designer lingerie company, walked away without a deal, after the sharks smirked at a multimillion-dollar valuation based on how much another investor supposedly forked over upon viewing a design concept drawn on a bar napkin.

Doug Gross is a staff writer covering personal finance for NerdWallet. Follow him on Twitter @doug_gross and on Google+.