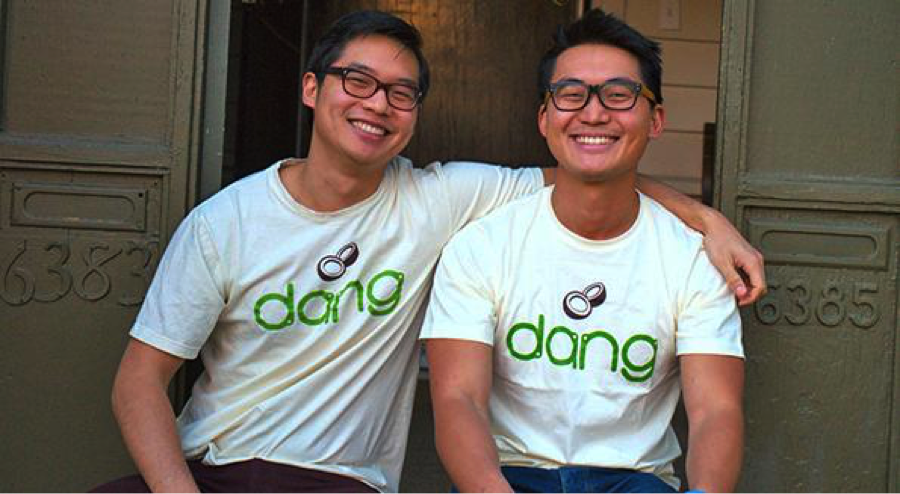 In 2012, Vincent Kitirattragarn noticed that the recipe for one of his mother’s dishes — miang kham, a Thai lettuce wrap snack — included toasted coconut flakes. They were so delicious that he decided to start a company to make and sell the flakes alone.

Later that year, Kitirattragarn attended a San Francisco food trade show with samples of the coconut chips in his backpack. While asking for feedback from participants at the trade show, he met a Whole Foods assistant buyer who gave him the thumbs-up. That vote of confidence gave him the momentum to keep building his business.

That company soon became Dang Foods, a reference to his mother’s name, which also appears in the company motto, “Dang, That’s Good!” In 2013, his brother Andrew joined as director of operations to handle the finances.

Working with manufacturers and extended family in Thailand to create the product and make enough of it to sell widely, the brothers quickly grew their business to the point where their snacks are now sold in thousands of stores nationwide.

But as they grew, they encountered a nagging problem with their cash flow.

“We’re actually quite a profitable company, but in terms of actual cash, it’s a different story,” Andrew Kitirattragarn says. This is because of the long delay between making a purchase order and getting paid, a process that can take up to five months.

After the Berkeley, California-based company sends in a purchase order for coconut flakes, suppliers in Thailand gather the materials and make the product. From the time the order arrives in Thailand, it can take roughly three months to manufacture, load and ship the snack to the California coast. Distributors take the snacks to more than 6,000 stores nationwide — adding even more time to the process — and pay the company for the product. The Kitirattragarn brothers needed to be able to boost their inventory, especially for their occasional deals, before distributors and stores paid them for an order. To do that, they needed financing to bridge the lengthy gap between ordering the tasty snacks and getting paid for them. In the intensely competitive snack-food business, it’s crucial for Dang Foods to be able to keep retailers stocked. Having to wait months between orders was a challenge.

“The worst thing is to be out of stock,” Andrew says. In a worst-case scenario, he adds, a supermarket could fill the empty shelves with other products — giving Dang Foods’ hard-won shelf space to its competitors.

To maintain a steady pace of production and avoid losing out to competitors, they needed to prepare more purchase orders, which is where the lag in cash was causing a problem. To solve it, Dang Foods recently opened a revolving line of credit at a bank in the San Francisco Bay Area. Dang Foods declined to disclose the name of the bank or share details about the line of credit.

The line of credit was a great help to Dang Foods because it gave the company access to a set amount of money, which can be borrowed and repaid as many times as desired, as with a credit card. This flexibility comes in handy especially when there’s a lag in cash flow, as Dang Foods experiences.

This type of credit is particularly effective when a small business can pay off the debt in the course of a normal business cycle, as Dang Foods can, when it gets paid for a shipment. To help small businesses in the process, the Small Business Administration’s CAPLine program facilitates loans and credit lines for those in need of immediate working capital. For more information, check the SBA website.

Applying for a line of credit

It can be tough to qualify for a line of credit. Lenders often require business tax returns, financial statements from past years and business registration details, as well as details of all business bank accounts. Exact requirements vary for each lender, and it’s easier to qualify if a company has been in business for at least two years.

When Dang Foods hit the two-year mark, Andrew contacted about five lenders in the area and sent them the company’s information. The two main things they needed to see, he says, are the financials — the company’s balance sheet and income statement — and two years of tax returns. The first showed the company’s profitability, and the second backed up that claim. Two years provided enough time to prove their rising success as a company.

Working with his lawyer, Andrew negotiated with the bank that gave him the best rate. The application process took about three months, but now that he knows what to do, he estimates that he could get through it in one month. Looking forward, he predicts that his company may get an extension on the line of credit and double the amount in six months.

For any prospective self-starters, Andrew advises, “Even before starting to become an entrepreneur, start saving as much as possible.” The longer a company can stay bootstrapped, the more flexibility it has. That has been key to the continued growth of Dang Foods in the organic food industry.

Spencer Tierney is a staff writer covering personal finance for NerdWallet. Follow him on Twitter @SpencerNerd and on Google+.